‹ The Station Model: Part I Lies, Damned Lies, and Statistics ›

When you finish this page, you should be able to: 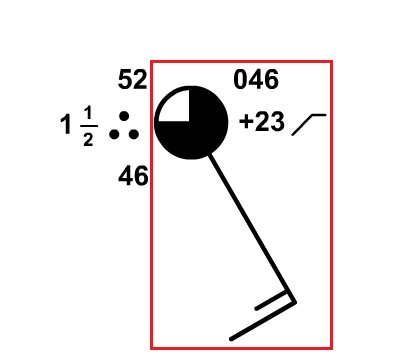 We're going to continue tackling the information contained in the station model, and now we're going to turn our attention to cloud coverage and wind direction and speed. I've outlined the part of the station model that includes this information in the sample on the right, but note that the station model also includes information about air pressure, which we'll mostly ignore for now and come back to later on. As I did with temperature, dew point, visibility, and present weather, I'll briefly describe each variable and its common units of measurement (if applicable), and then describe how to interpret it on a station model. Let's start with sky coverage:

Sky Coverage: Sky coverage simply describes the portion of the sky covered by clouds. Let me start with the age old question: "Which phrase do you think describes a cloudier sky? Partly sunny or partly cloudy?" The National Weather Service defines partly sunny and partly cloudy as essentially the same, with the caveat that we wouldn't use "partly sunny" at night, of course. But, in practice, some forecasters use these terms differently because the word "partly" is somewhat vague, so it's not clear cut. Some folks use "partly sunny" to emphasize that there will be a bit more clouds than sun, and use "partly cloudy" to emphasize that there will be a bit more sun than clouds. With this usage, a partly sunny day is actually cloudier than a partly cloudy day.

Most weather forecasters don't want to get drawn into such an argument of semantics, so when it comes to quantifying the coverage of the sky by clouds, they rely on a specific "pie-chart" system that leaves little room for debate (see table below). The "pie" that makes up the sky coverage observation is divided into 8 sections. Clear conditions (0/8 cloud coverage) constitute a perfectly sunny sky, while a "few" clouds (1/8 to 2/8 coverage) represent mostly sunny conditions. "Scattered" clouds (3/8 to 4/8 cloud coverage) correspond to a partly cloudy or partly sunny sky, with "broken" clouds (5/8 to 7/8 cloud coverage) describing a partly cloudy or partly sunny (5/8 coverage) to mostly cloudy (6/8 to 7/8 coverage) sky. When the sky is nearly overcast except for a few breaks, forecasters refer to the cloud coverage as breaks in the overcast (abbreviated as "BINOVC"). Picturing "overcast" conditions (8/8 coverage) is straightforward. When the sky is broken or overcast, weather observations will include the corresponding cloud ceiling, which is simply the height of the base of a broken or overcast layer of clouds. Cloud ceiling is not included in the station model, but it is particularly important for airplane pilots. 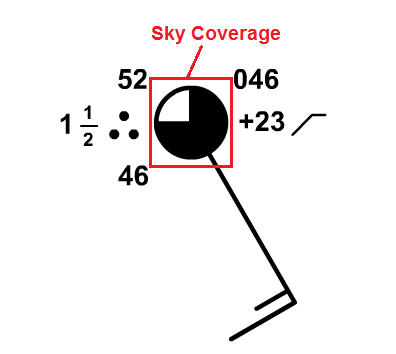 A sample station model with sky coverage labeled. In this case, the sky was mostly cloudy with 6/8 cloud coverage.
Credit: David Babb

I should add that on occasion, the sky cover cannot be seen due to a low-level obstruction such as heavy fog, heavy rain, blowing snow, etc. In such cases when the observer cannot determine the sky coverage, the condition "sky obscured" is reported. The station model is thus marked with an "X" in the sky cover circle to designate that an obstruction prevents the weather observer from observing the rest of the sky. Even if the observer is fairly confident that the sky is overcast, if the ceiling cannot be observed, "sky obscured" would still be reported. Also, when sky obscured conditions exist and vertical visibility is very low, you'll sometimes see references to an indefinite ceiling. This simply means that the surface obscuration (such as heavy fog, blowing snow, etc.) has limited vertical visibility to the point that the cloud ceiling can't be determined.

Wind Direction: Wind is the horizontal movement of the air, and one of the most fundamental rules that you need to know is that the direction of the wind is always expressed as the direction FROM which the wind blows and NOT the direction toward which the wind blows. Make sure to commit that to memory! So, if the wind blows from the north, for example, you'll hear a meteorologist say that the wind is "northerly" (or there's a "north" wind), NOT a "southerly" or "south" wind. Meteorologists are always interested in where the air is coming from because it can help with weather forecasting. For example, if a wind is blowing from a region of warm air toward a region of colder air, a weather forecaster would want to know that! 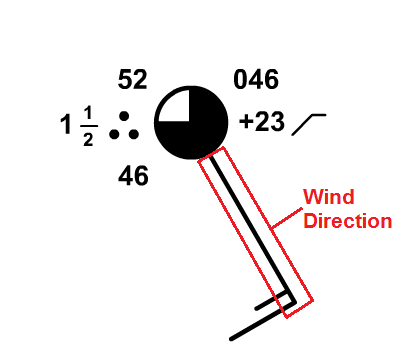 A sample station model with the wind direction flag labeled. In this case, winds were blowing from the southeast (or more precisely, 150 degrees).
Credit: David Babb

Wind Speed: Wind speed is simply how fast the air is moving. You may hear references to "sustained" wind speeds, which are wind speeds averaged over a certain time period (usually 1 or 2 minutes), but the wind is sometimes unsteady, with brief, sudden increases in wind speed called gusts. As a general rule, gusts last less than 20 seconds. Weather observers typically only report gusts when the wind varies by greater than 10 knots (between the peaks and lulls). However, reported wind gusts usually do not appear on station models.

In the United States, we usually talk about wind speed in miles per hour (just like automobile speed limits), but on station models, wind speed is always expressed in units of knots (nautical miles per hour). For the record, 1 knot = 1.15 miles per hour. On station models, the speed of the wind is expressed as a series of notches, called "wind barbs" on the clockwise side of the line representing wind direction. Each longer wind barb counts as a tally of 10 knots (actually, each longer barb represents a speed of 8 to 12 knots, but weather forecasters operationally choose the middle value of 10 knots for simplicity). The shorter barbs count as a tally of five knots. So, to figure out the wind speed, you need to add the values associated with any long and short wind barbs present. 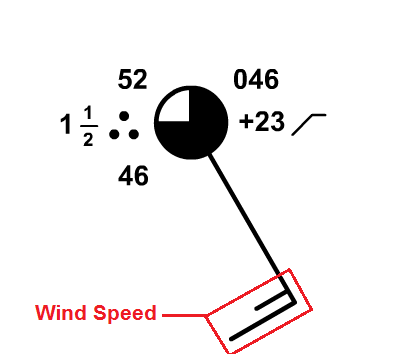 A sample of a station model with wind speed labeled. In this case, one long wind barb (10 knots) and one short wind barb (5 knots) totals a wind speed of 15 knots (17 miles per hour).
Credit: David Babb

In the sample station model on the right, there's one long barb (10 knots) and one short barb (5 knots), so we add 10 knots and 5 knots together to get our wind speed of 15 knots (which converts to 17 miles per hour). If the surface wind is "calm," then it has neither direction nor speed. In this case, a larger circle is drawn around the circle that represents sky coverage. To see an example, check out the 1828Z map of station models over a portion of the western United States on May 16, 2017. The two stations I've highlighted (Havre and Glasgow, Montana) were both reporting calm winds.

On the other hand, for very strong winds, a "triangular" barb counts as a tally of 50 knots.The use of the 50 knot symbol doesn't happen at the surface very often in most locations, however, because sustained winds rarely reach such speeds. Of course, wind gusts of 50 knots occur a little more frequently (severe thunderstorms, strong cold fronts, etc.). You're more likely to observe a sustained 50-knot wind near the Atlantic and Gulf Coasts with a hurricane nearby, such as the sustained 50-knot wind at Cape Hatteras, North Carolina, early on August 27, 2011 as Hurricane Irene approached.

I've also created a short video (3:20) that walks through a translation of all the variables we've covered so far in the station model, with an emphasis on wind direction and speed. Check it out!

The Station Model
Click here for a transcript of this video.

You should be able to interpret most of the information from a station model, and our interactive station model tool will help you learn how to do that. I'm going to decode the parts of the station model that we've talked about so far, and explore wind direction and speed a bit more since they tend to be a bit more challenging.

I want to spend a little time specifically on wind direction and speed so that you get used to the conventions for those variables. First, the tool defaults to a wind from 180 degrees. It's important to remember in meteorology that wind is expressed as the direction that the wind is blowing from.

If we assume that north is at the top of the image, south is at the bottom, west is on the left, and east is on the right, we can see that this 180-degree wind is blowing from the south to the north. We would call this a south wind, or a southerly wind.

We can change the wind direction to, say, 50 degrees. Now we have winds from the northeast to the southwest, and that's what it would look like on the station model. We would call this a northeast wind, or a northeasterly wind.

If we had calm winds, we would just have an extra circle around the sky coverage because the wind doesn't have a direction. Or, on the other hand, we could make it really windy, and have 65-knot sustained winds –say maybe a hurricane is making landfall nearby. The pennant, or triangular barb, represents 50 knots, the long barb represents 10 knots, and the short barb represents 5 knots. Add those together, 50 + 10 + 5, to get our total of 65 knots.

Think you have a good handle on wind speed and direction on a station model?  Take this self-quiz below to see how you do. Begin by hitting the "Quiz me" button. Fill in the missing wind direction and speed, and then hit "Submit" to check your answer. Wind direction can be rounded to the nearest 10 degrees and wind speed is to the nearest 5 knots. You may also turn on some directional hint lines if you have trouble estimating angles. If you've mastered wind direction and speed on the station model, you should be able to get the right answer just about every time!