The Composition of our Atmosphere

‹ What do Meteorologists Study? Does Anybody Really Know What Time It Is? ›

When you've finished this page, you should be able to discuss the composition of the atmosphere, including identifying which gases are most and least abundant, and which gases have permanent versus variable (changing) concentrations. 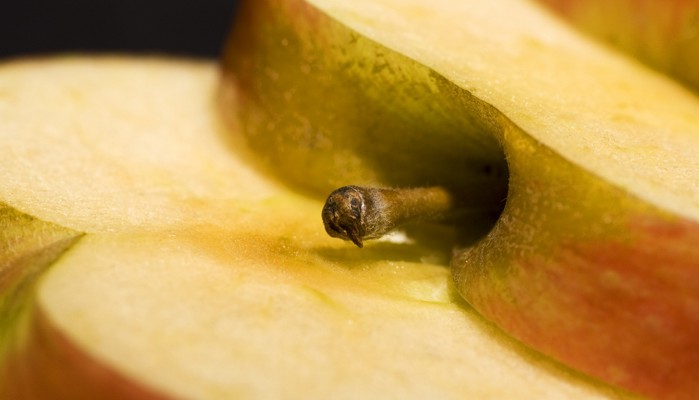 When viewed from the ground, the atmosphere appears immense. However, it is only as thick as an apple skin when compared to the radius of the Earth.
Credit: APPLE_2 / Derek Thomas / CC BY-ND 2.0

To put some numbers to this analogy, imagine an average sized apple with a radius of 40 millimeters (a little more than 1.5 inches). The skin has a thickness of about 0.3 millimeters (about 0.1 inches), which is 0.75 percent of the apple's radius. Now, our atmosphere has no definite upper boundary, but nearly all of the mass of the atmosphere lies below an altitude of 50 kilometers (a little more than 30 miles above Earth's surface). So, if we use 50 kilometers to compare with the average radius of Earth (6,368 kilometers), the thickness of our atmosphere is about 0.8 percent of the radius of Earth.

What does that all mean? Well, the atmosphere is actually quite thin (when you compare it to the size of the earth) even though it seems so vast to us standing on the ground. This high-resolution view of Earth and its atmosphere shows the thin atmosphere surrounding our planet, just as the skin of an apple surrounds the fruit inside.

What should you take away from this table? First of all, even though we need to breathe oxygen to survive, oxygen is not the most abundant gas in the atmosphere. Nitrogen is, by far. There's nearly four times as much nitrogen as there is oxygen! However, nitrogen and oxygen, combined, account for roughly 99 percent of "dry air" in the atmosphere, so they're the "big two" in terms of total concentration.

Of course, air isn't perfectly "dry." Water vapor also exists in our atmosphere, but note that the concentration of water vapor is rather small and is variable (it varies from 0 to 4 percent). Furthermore, while you might hear a lot about carbon dioxide in the news because of its connection to climate change, it only accounts for about 0.041 percent of the atmosphere. In other words, carbon dioxide accounts for a little more than 400 molecules out of every million molecules in the atmosphere. Surprised? That doesn't mean carbon dioxide is an insignificant gas, however. Indeed, it's a very important gas for reasons we'll cover later on.

With a little background about meteorology and the atmosphere out of the way, now we're going to start filling our meteorologist's toolbox. For starters, since weather occurs all over the globe constantly, meteorologists must have a handle on time zones and time conversions in order to interpret data and communicate it correctly. Therefore, it's time to talk about time in the next section.

‹ What do Meteorologists Study? Does Anybody Really Know What Time It Is? ›
METEO 3 Introductory Meteorology