‹ Precipitation, Ground Cover, and Temperature Lesson 4: The Role of Water in Weather ›

After completing this section, you should be able to describe proper thermometer placement to ensure accurate temperature measurements, as well as discuss reasons why common "air" temperature readings on bank thermometers, car thermometers, and "on the field" at sporting events may be inaccurate.

When deciding on a title for this section, I strongly considered, "Measuring Temperature: Why your Car Thermometer is Lying to You," but that seemed a little long. You see, measuring the temperature of the air might seem straightforward, but it's more complicated than you might think. And, while you can find many sources of temperature observations, some are certainly more accurate and meaningful than others. So, let's start with some common instruments for measuring temperature, and discuss the proper way to measure temperature. Then we'll talk about the flaws of some common temperature observations. As it turns out, you should be leery of temperatures from bank thermometers, car thermometers, and those taken "on the field" at sporting events!

For starters, did you know that multiple types of thermometers (instruments for measuring temperature) exist? I'll quickly describe some common types:

Liquid-in-glass thermometers (credit: NOAA) have been around for more than 200 years, and haven't changed much because they're simple, inexpensive, and reasonably accurate. A liquid (usually alcohol or mercury) is free to move within a thin opening inside a glass enclosure. Temperature changes cause the liquid to either expand or contract, resulting in a change of the length of the liquid in the thermometer. 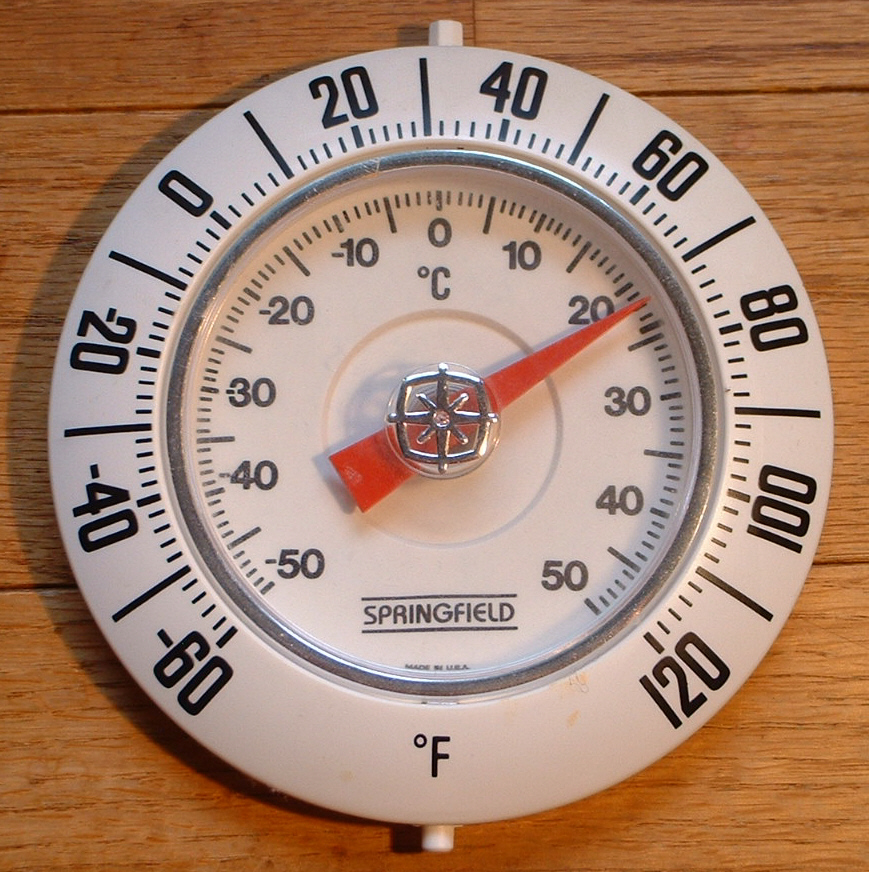 Bimetallic thermometers are often mounted outside homes on patios and are often used as cooking thermometers.
Credit: Public Domain

Bimetallic Thermometers, an example of which is shown on the right, are often mounted on patios or used for cooking thermometers, and don't contain any liquid. Instead, two types of metal are welded together into a strip that is coiled into a spiral (usually on the back side of the thermometer face). Temperature changes cause the strip to expand or contract unevenly, and move the pointer on the face of the thermometer.

Thermistors (Credit: Ansgar Helwig / CC-BY-SA 2.0) are a common breed of electrical thermometer that measures temperature using the relationship between temperature and electrical resistance. Thermistors are commonly the source of exterior temperature readings on car dashboards (Credit: Steve Seman), and are also used to measure temperatures above the earth's surface when weather balloons are launched.

So, why is your car thermometer lying to you? The fact that it uses a thermistor to measure exterior temperature isn't the issue (thermistors are reasonably accurate), but it's the placement of the thermistor that's the problem. To see why, let's start with how temperatures should properly be measured. 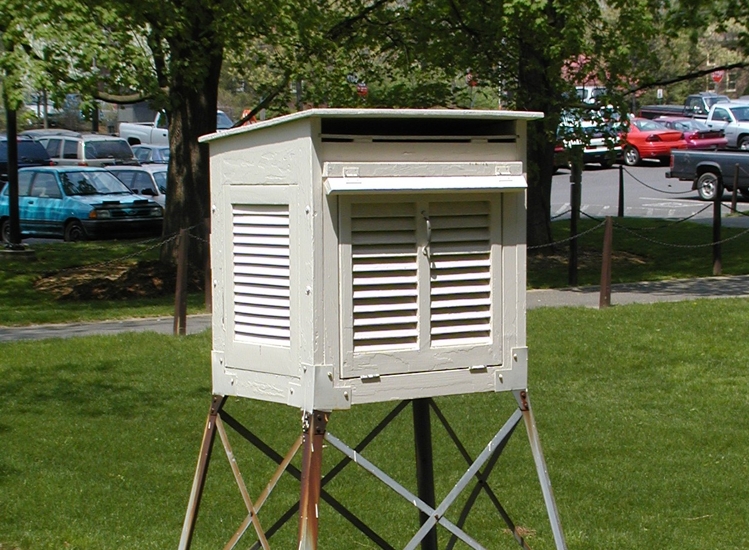 The cotton-region shelter (Stevenson Screen) outside of the Walker Building on Penn State's main campus helps to ensure that temperature is measured properly.
Credit: David Babb

Other official temperature measurements taken via the Automated Surface Observing System (ASOS), mostly located at airports, have shields that serve the same basic function of a cotton-region shelter, and if you have ever purchased a home weather station, its thermometer should have come with a shield to attempt to protect it from direct solar radiation, yet still allow for free air flow.

So, now that you know how temperature should be measured, what's the problem with temperatures measured by bank thermometers, car thermometers, or "on the field" at sporting events? For starters, bank thermometers are often housed very close to (or are attached to) buildings. Furthermore, they're often exposed to direct sunlight, or are encased in a dark-colored shelter, which maximizes the absorption of solar radiation. So, when you see a really high temperature on a bank thermometer on a sunny day, don't buy it! The thermometer is likely not sited properly, and is in an environment causing it to read much too warm.

What about your car thermometer? In most cars, the thermistor is located behind the car's front grille, which means it is influenced by the temperature of the car's engine, exhaust from surrounding vehicles, as well as the underlying road. Most automobile grilles are only a couple of feet off the ground, which is close enough to the hot pavement (which is efficiently emitting radiation), to additionally warm the thermistor's environment. As a result, like bank thermometers, your car's external temperature reading is often too high, especially when you're in stop-and-go traffic on a sunny day. When you're traveling down the road at highway speeds, the fast flow of air near the thermistor does help make temperature readings a bit more accurate and meaningful, although still not ideal. The temperature readings should also be a bit more accurate at night or on cloudy days (although again, still not ideal). Despite their shortcomings, however, a car's thermistor can give you a good idea about temperature changes while you travel (temperature increases and decreases as you drive up and down mountainous terrain, for example).

Finally, what about temperatures measured "on the field" at sporting events? Often, they're too high, as well. For starters, the thermometers are often exposed to direct sunlight. Furthermore, placing a thermometer on the field means that temperature is being measured inches above the ground, where conduction can make it blazing hot. Remember that temperatures can approach 140 degrees Fahrenheit in a thin layer of air in contact with the ground on a sunny, summer day thanks to conduction. Darker artificial playing surfaces only exaggerate the problem, since they more readily absorb solar radiation (similar to how paved surfaces more readily absorb solar radiation compared to grassy surfaces). Either way, temperatures measured on the playing surface are not representative of air temperatures five or six feet above ground, where official measurements are taken.

My final comments in our lesson on temperature are practical ones: If you ever invest in a home weather station, and you want to ensure accurate and meaningful temperature measurement, place your thermometer away from any buildings, five to six feet above ground (ideally not over a paved surface), and make sure it's shielded from direct solar radiation, yet can get as much open air flow as possible. Furthermore, don't buy into the temperatures displayed on car or bank thermometers. They're not sited properly and are usually lying to you!