Module 12 Lab: Options for the Future of Climate, Energy, and Economics, Including Geoengineering

Module 12 Lab: Options for the Future of Climate, Energy, and Economics, Including Geoengineering

The goal of this exercise is to explore a range of scenarios for our future in such a way that our energy needs are met, our economy is strong, and our climate is controlled to some extent. The underlying premise is that if do nothing and continue down our current path, the climate will warm to truly dangerous levels, which will have serious consequences for our economy and thus our quality of life. The options we will explore include shifting to renewable energy sources, conserving energy (being more efficient so that we do the same things with less energy consumption) — both of these limit the carbon we emit to the atmosphere. We will also explore two other options that sometimes are called “geoengineering” — one involves injecting sulfate aerosols into the stratosphere to block a little of the sunlight and another involves the direct removal of carbon from the atmosphere, sometimes called negative carbon emissions.

All of these choices involve costs, and the model calculates these costs. Another kind of cost comes in the form of climate damages, and the model calculates these too. From an economic standpoint, the best scenario is one that minimizes the costs because these costs represent a drain on the global economy; the global economy will be better able to meet all of the needs of humanity if we can keep the costs down. The figure below, modified from the one you’ve seen before in Module 5 on the carbon cycle, shows the general scheme the model uses to calculate all of the costs. 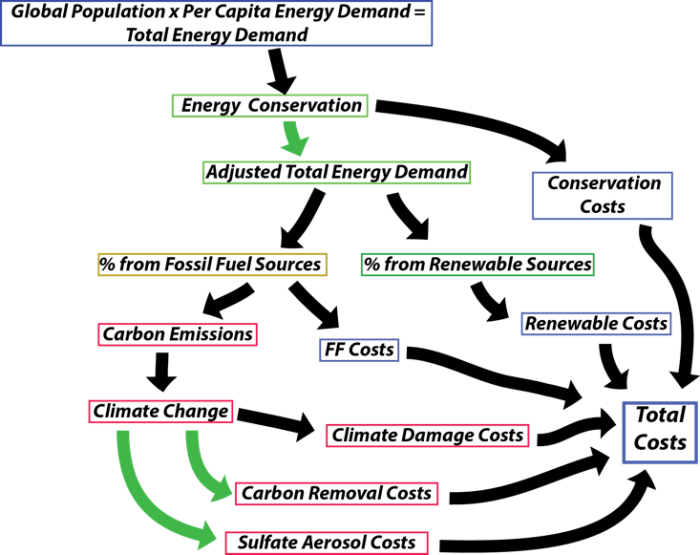 It might help to look at this backward from the total costs, which sums the climate damage costs, the costs of fossil fuel energy, the costs of renewable energy, the costs related to energy conservation, and the costs related to geoengineering. The climate damage costs are related to the temperature change, and these costs go up as the square of the temperature increases, so that the costs related from going from 5°C to 6°C are considerably more than going from 1°C to 2°C. The fossil fuel costs, renewable costs, and conservation costs are related to how much energy is provided by those sources. The ideal thing from an economic standpoint is to have the smallest Total Costs because that means there is more money to pour back into the economy and to provide a higher quality of life.

At the core of this model is the global carbon cycle model coupled with the simple climate model — you’ve seen these before. The model also calculates the energy demands and carbon emissions that reflect the population size and choices we make about how much to pursue conservation and renewable energy sources. The model you will work with here has some additions that represent two geoengineering solutions — the addition of sulfate aerosols into the stratosphere to block some of the sunlight (SAG for sulfate aerosol geoengineering) and the direct removal of carbon dioxide from the atmosphere (DRC).

The idea behind sulfate aerosol geoengineering has its origins in the studies of how volcanic eruptions affect the climate. When volcanoes erupt, they a combination of ash (tiny fragments of volcanic rock and glass) and gases, including water vapor, carbon dioxide, sulfur dioxide, and others. The sulfuric gases condense into little droplets called sulfate aerosols that can reflect sunlight, cutting down on the solar energy that drives our climate system — this causes a cooling effect that can last for a couple of years, ending when the aerosols finally fall back to the surface. The key to this is that if the force of the eruption is great enough, the sulfate aerosols end up in the stratosphere (higher than 15 km in altitude); gravity is weak there and there is essentially no water to wash the aerosols out, so they can stick around for a few years. The idea that we humans could add sulfate aerosols into the stratosphere to cool the climate (or prevent further warming) was first suggested by the Nobel Prize-winning atmospheric chemist Paul Crutzen in 2006. Crutzen admitted that a much smarter way of dealing with the problem of global warming was to drastically reduce our carbon emissions, but he pointed out that humanity has not yet shown the resolve needed to tackle this problem; so he proposed this as a potentially easier way to avoid the dangerous consequences of further warming.

This is kind of a thorny issue for a number of reasons. Some people worry that pursuing this kind of solution is dangerous because it just treats the symptoms of the problem without tackling the underlying cause, which is the excess CO2 we keep adding to the atmosphere. Many people see this as dangerous in the sense that tampering with natural systems almost always has hidden unintended consequences. In fact, sophisticated 3D climate model simulations with the addition of sulfate aerosols suggest that the cooling effects would not be uniform and it would change patterns of precipitation as well, which means that some areas of the globe might suffer, while others would see benefits. But, if you are in a car going down a hill and your brakes are not working, you may need to consider doing something other than stepping on the brake pedal — and time is of the essence!

How would this work? Crutzen and others since him have worked out a variety of scenarios for getting the sulfate into the stratosphere, including sending loads of it up in balloons and dumping it out of huge military airplanes that can fly high enough. The general idea is illustrated in the figure below, where the red plus and minus signs indicate changes to the solar energy caused by the sulfate aerosols. 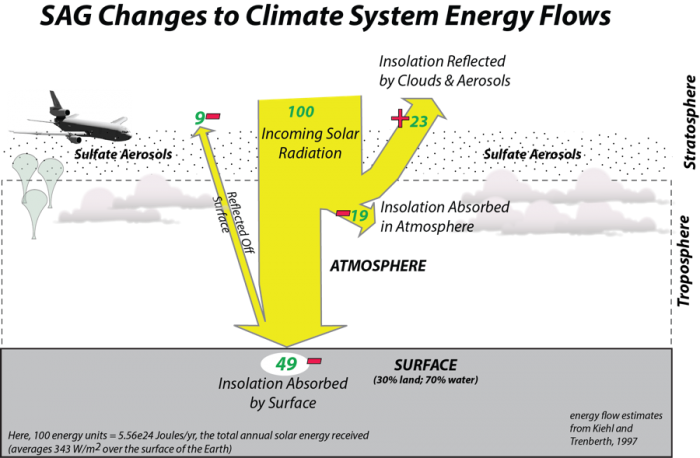 Sulfate aerosol geoengineering (SAG) involves changing the solar energy flows to our climate system. The numbers next to the yellow arrows indicate the % of solar energy that is absorbed by or reflected from the surface and atmosphere. The red plus and minus signs show how these values change due to the sulfate aerosols. The sulfate aerosols reflect more of the insolation from the sun, which means that there is less energy absorbed by the lower atmosphere and the surface, thus cooling the planet.
Credit: David Bice © Penn State University is licensed under CC BY-NC-SA 4.0

Although this is difficult to price out, some of the estimates (Robock et al., 2009) are that it would cost between 1 and 30 billion dollars per year to add one teragram of (1 Tg = 1012 g) of sulfate into the stratosphere per year. 1 Tg of sulfate, evenly distributed in the stratosphere is estimated to block about 1.3 W/m2 of solar energy, which is about 0.4% of the total. In our simple climate model, changing the solar input by 1 W/m2 changes the temperature by about 0.35°C. One of the challenges is that the sulfate aerosols fall out of the atmosphere, so we would have to constantly add it to maintain the desired level of solar reduction to combat the warming. In the model, if you activate this geoengineering scheme, you set a desired limit to the global temperature change and sulfate is added in the necessary amount to keep the temperature change close to this limit. This then generates a cost that affects the global economy.

The idea of carbon sequestration has been around for a relatively long time — emissions from a fossil fuel-burning power plant can be captured at the source and processed to remove the CO2. The extracted CO2 is then pumped deep underground where it can reside in the pore spaces of sedimentary rocks. In some cases, it is pumped back into the rocks from which oil or gas have previously been removed. Carbon sequestration is expensive, but it can virtually eliminate the carbon emissions from some power plants. However, carbon sequestration does not actually remove CO2 from the atmosphere, and if we were to continue to burn fossil fuels in cars and in homes, then the concentration of CO2 in the atmosphere would continue to rise. Carbon sequestration has not really taken off because the extra expense means that it is far cheaper for a power company to produce new electricity using solar or wind systems.

The direct removal of CO2 from the atmosphere sometimes called negative emissions is a relatively new idea — the first facility was put into action in the fall of 2017 in Iceland. A Swiss company called ClimeWorks developed a partnership with a geothermal power plant to essentially test the technology. There are several other companies in Canada and the US at earlier stages in development. The general idea is to pump huge volumes of air through a chamber in which there are numerous small beads coated with a substance that effectively grabs onto CO2 molecules. When the beads have absorbed as much as possible, the chamber is sealed off and the CO2 is released by changing the humidity in the chamber. The resulting air in the chamber has a very high concentration of CO2; it is mixed with water and then pumped deep underground. The CO2-rich solution reacts with the basaltic bedrock and new minerals are formed, locking up the CO2. This process essentially takes the CO2 out of the air and turns it into rock — pretty clever! The general scheme is shown in the diagram below. 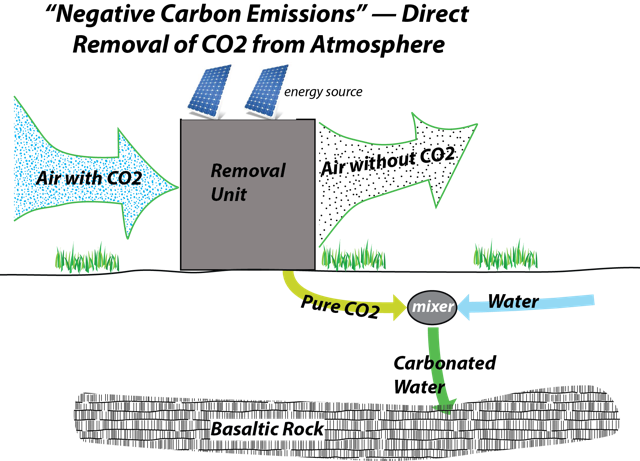 Schematic illustration of the process of direct carbon removal from the atmosphere (DCR), also called “negative emissions”, as implemented by the facility in Iceland operated by the Swiss company Climeworks. The process essentially takes CO2 from the atmosphere and ends up sequestering it in the form of new minerals that result from the interaction of the carbonated water and the basaltic bedrock.
Credit: David Bice © Penn State University is licensed under CC BY-NC-SA 4.0

This process is in the early stages of development, so it is difficult to know how much it will cost. The companies doing this believe that they can probably get the cost down to $366 billion per Gt C removed. There would have to be thousands of these units set up around the world in order to scale this up. In our model, we are going to assume that if we were to begin this process, we would initially be limited to 5 Gt C removed from the atmosphere per year, but that as time goes on, our capabilities would increase and we could draw more and more out of the atmosphere.