There is a variety of human health concerns associated with warming in the future. The most serious concern is related to deaths caused by heat waves.

A powerful example of the impacts of these so-called extreme heat events comes from the 2003 heat wave that is believed to be responsible for tens of thousands of deaths across Europe, including at least 15,000 in France. This satellite image shows the extent and severity of the overheating: 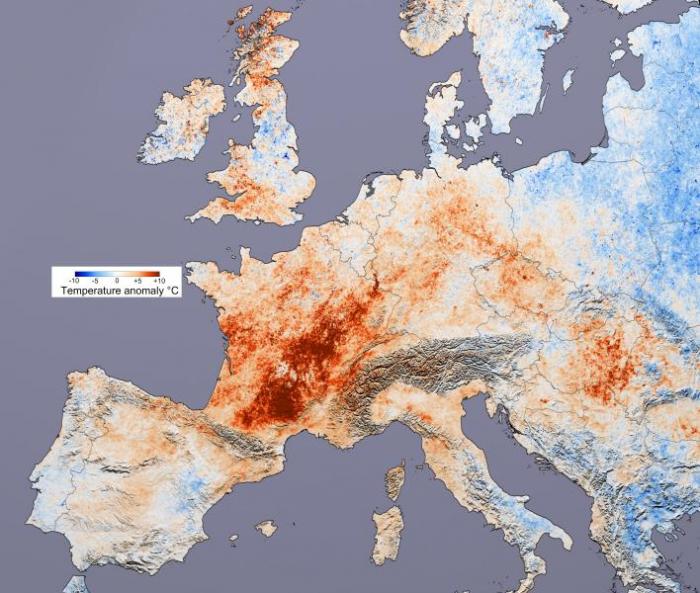 Satellite image showing the extent and severity of the overheating in 2003
Credit: Image found at NASA, courtesy Reto Stockli and Robert Simmon, based upon data provided by the MODIS Land Science Team.

Here, the temperature anomaly is obtained by subtracting the average July-August temperatures from 2000, 2001, 2002, and 2004 from the 2003 July-August temperatures. As you can see, a large portion of southern France suffered under temperatures 5-10°C above normal. This heat wave caused the most trouble in places that are normally quite cool in the summer so that apartments and houses generally are not air-conditioned and people are not accustomed to dealing with serious heat. There were no emergency plans in place to respond to the heat wave, and the vulnerable (mostly elderly) did not know where to go and what to do to find relief from the heat. The same heat wave affected Spain, but the people there are accustomed to very high summer temperatures, and there were relatively few deaths as a result.

An important lesson from this disaster is that the most vulnerable areas are places that in the past have not been too hot and so there is not a culture of dealing with the heat and no emergency plans in place.

In the US, the future almost certainly will have more frequent hot days and nights. This can be seen in the following set of maps, which show the number of days over 100°F for the recent past and the end of this century under two different emissions scenarios:

Maps showing the number of days over 100°F for the recent past and the end of this century under low and high emissions scenarios.
Credit: USGCRP (2009)

The message here is that throughout most of the country, we will be challenged with many more hot summer days. By the end of the century, a cool, northern state like Minnesota will have more +100°F days than the southern tip of Texas. What can be done about this? How can we adapt? Can we mitigate the impacts of these extreme heat events?

Some excellent examples of how to adapt to and mitigate the consequences of these extreme heat events come from several US cities. Philadelphia, in 1995, launched a Hot Weather Health Watch and Warning System to respond to health threats from more frequent heat waves. The system includes education, media alerts, information hotlines (no pun intended), and cooling shelters. They estimate that this system has already averted more than 100 heat-related deaths. Both New York City and Chicago have taken steps to cool their downtown areas by covering roofs with reflective materials and plants; these steps will mitigate the overheating in the city centers, where temperatures can be as much as 4°C warmer than the surroundings. In addition to minimizing heat-related deaths, these measures will also reduce the amount of electricity needed for cooling, thus providing an extra benefit. Many regions are modifying building codes to promote new buildings that are easier to keep cool (and easier to keep warm).

So, there are some relatively easy measures that can be taken to adapt to more frequent heat waves.

As the climate warms, many areas are already finding that new infectious diseases are becoming a problem. One familiar example of this is West Nile Disease, a disease spread by a species of mosquito that is normally found in warm regions of the world. This disease, once introduced to the US, has spread rapidly, aided by generally warmer temperatures. There have been more than 30,000 cases of West Nile Disease in the US and over 1,000 deaths. In the US, we are already adapting to this new disease through education and the use of pesticides to limit the spread of the mosquitoes. Similar new diseases can also be adapted to, but public health officials will have to be diligent in looking out for the arrival of the new diseases — which is something they already do.

In summary, although warming will bring new challenges to human health, the adaptations are relatively straightforward, and in many places, they are already beginning.