Carbon emissions can be reduced (abated) by a variety of means — improved efficiency, burning cleaner fuels (natural gas instead of coal), capturing the carbon dioxide emitted during combustion at power plants and sequestering it, and switching to alternative sources of energy such as wind, solar, or nuclear, all of which result in lower carbon emissions.

Improving efficiency is an obvious choice, and it involves things like improved mileage for vehicles, better insulation and energy management for dwellings, more efficient light bulbs such as LED lights. Efficiency can also be gained by modifying our behavior such that we do the same things in a way that uses up less energy. For instance, we could make fewer trips to do our shopping by planning more carefully, or we could make better use of carpools, or we could make public transportation really work in our cities.

We could also switch to burning cleaner forms of fuels to generate our electricity or power our vehicles. Natural gas (mostly methane) is a cleaner form of fuel than either coal or gasoline, in part because methane is a simpler form of hydrocarbon — CH4 — and its main combustion products are water and CO2, with minor amounts of nitrous and sulfurous gases that contribute to pollution. In contrast, coal burning releases substantial quantities of these gases along with other harmful gases, some of which contain mercury, which causes long-lasting environmental damage. It is estimated that the US has lowered its carbon dioxide emissions by something like 0.5 GT in the last year, thanks to the increase in gas-burning power plants, utilizing gas from the Marcellus Shale and other gas-rich formations.

Carbon capture and sequestration (CCS) is another way to reduce emissions into the atmosphere. In essence, this involves capturing carbon at the point where it is emitted into the atmosphere (like a big power plant), then liquefying it and injecting it into an underground reservoir. This is a fairly new technology and many experiments are underway throughout the world to figure out how to make this work. One of the first large experiments is taking place beneath the North Sea, where the Norwegians have injected a large quantity of CO2 into a layer of sandstone from which they had previously extracted oil and gas. For this to work, the CO2 has to stay put and not leak back up to the surface; these experiments are being carefully monitored to see how much leakage occurs. CCS can also be achieved by pumping CO2 into large aquifers where it reacts with minerals.

The other strategies for reducing emissions revolve around technologies that do not involve burning fossil fuels for energy. Wind and solar are certainly expanding, but they are still not as cheap as generating electricity from fossil fuels. The costs of generating electricity by various means have been studied by the US Energy Information Administration, and some of their results are shown in table below, ranking these energy sources in terms of the system levelized costs (in dollars per MWh of electricity) for a new plant that would come online in the year 2017. The system levelized costs here include the money needed to build and safely maintain a power plant spread out over the lifetime of the plant.

As you can see, natural gas is currently the cheapest form of electricity generation by a wide margin. But it is surprising to see that hydropower, wind power, and geothermal power are all cheaper than coal. Hydropower in the US is already at about its maximum level of generation, but wind and geothermal are currently underdeveloped. But to scale up these other, cleaner forms of energy to the point where they can generate the total demand of our energy system cannot happen overnight, and it will cost money. Part of the problem here is that it is hard to scale up these other energy forms when the price of natural gas is cheaper.

Reducing carbon emissions will almost certainly cost money in one way or another, and the question now is: How much? The answer is not obvious, and it will become cheaper as new technologies make these alternative cleaner energy forms more affordable, but based on the way things stand now, Nordhaus has tried to figure out an approximate answer. Nordhaus assumes that there are some easy gains that cost almost nothing (like the switch from coal to natural gas that has occurred in the US in the last year), but that if we try to make deeper cuts, we have to shift to non-fossil-fuel forms of energy, and then it starts to get expensive.

Here is what Nordhaus comes up with for abatement costs: 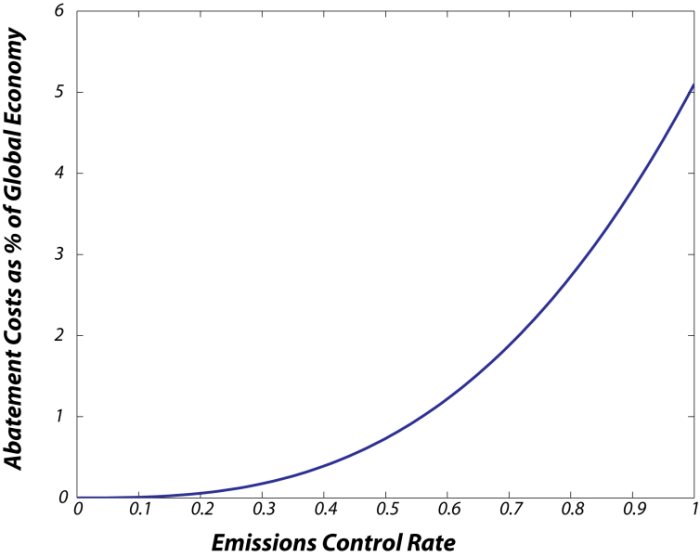 What this shows is how the abatement costs vary with the emissions control rate. The emissions control rate is the fraction by which the carbon emissions will be reduced; a value of 1 means that there is a complete stop to carbon emissions and when it has a value of 0, that means that we do nothing to reduce emissions. The abatement costs here are indicated in terms of a percentage of the global economic output, and it is worth noting that even in the extreme case of an emissions control rate of 1 (completely halting carbon emissions), it only costs 6% of the global economy. But, from an economic standpoint, one would say that those costs have to be compared with the possible benefits to all that might come from using that 6% to improve social well-being. How might we benefit from this kind of expense involved with reducing emissions? This is where we need to go back to the costs related to damages caused by global warming — it is a complicated question, one that can be best understood through the use of a model that will calculate the warming related to carbon emissions and at the same time calculate the costs of damages and abatement.