As we have seen in Module 9, climate change and population growth will present some major challenges for our agricultural system, and these challenges vary around the globe, and they also vary according to the kind of agricultural activity — raising livestock, growing grains, growing fruits, etc.

In the future, more carbon dioxide in the atmosphere will help some crops to grow faster — this is the CO2-fertilization effect we discussed in Modules 5 and 9. In many regions, a small bit of warming will also enhance plant growth. These two effects, combined, mean that under a moderate warming scenario such as that associated with the SRES A1B scenario (the optimistic one), the global agricultural output is expected to grow slightly.

However, most plants have an optimum growth temperature, and if the temperature rises too high, the growth of these plants declines rapidly. For instance, corn productivity declines rapidly above 95°F and soybeans decline rapidly above 102°F. In many areas, the warming will not exceed this optimum temperature range, so yields will probably increase slightly due to the combination of higher CO2 and warmer temperatures. However, more frequent floods and droughts may reduce yields, as can be seen in the recent history of corn production in the US: 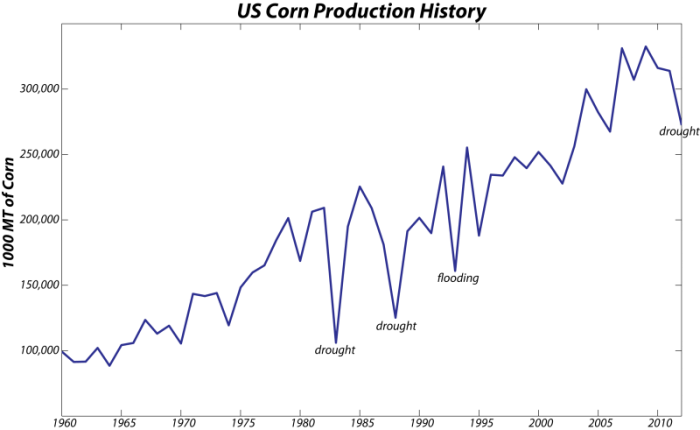 Furthermore, it appears that many weeds will also grow much better in a warmer climate, increasing the need for the use of herbicides in order to keep yields high.

Other types of crops will have different challenges in a warmer climate. For instance, some fruit crops do not necessarily benefit from any heating at all, and many fruit crops may be damaged by the earlier arrival of spring — they are encouraged by the early spring warmth to flower earlier, but this then leaves that year's crop vulnerable to a subsequent frost damage, which can severely limit the fruit production. These frosts following a premature warming are likely to increase in the future.

Livestock may be at risk, both directly from heat stress and indirectly from reduced quality of their food supply. The grasses in pastures do not respond much to increased CO2, but they do decline with higher temperatures and less water. A good portion of the rangeland in the US is in areas that can expect less precipitation and less surface water in the future, so livestock yields may suffer.

So, how can we adapt to these changes? One way is by being more careful about water management, focusing on water efficiency to deal with times of drought. Another measure is to plant a more diverse mix of crops in more regions of the country so that if a flood, drought, heat wave, or late frost occurs, not all of the agricultural production will be reduced. Yet another measure is to develop new strains of crops and grasses that are better suited to the new climate conditions. Developing new strains is expensive, but is made a bit easier by the fact that there is already a vast, diverse agriculture in the more tropical regions, and we can effectively adapt methods and crop varieties that are already utilized in these warmer areas. A final adaptation strategy involves changing the places where we grow certain crops, shifting the location to find the optimum set of growing conditions. This last option would be expensive if we attempted it over a short time span, but there is a gradual shift; the economic impacts are likely to be limited.

‹ The Need for Regulation of Emissions up Water Resources ›