The Economic Costs of Climate Change

The Economic Costs of Climate Change

There are a variety of ways that climate change will have an economic impact — some are gradual changes such as increased cooling costs for buildings, while others are more dramatic, related to the higher frequency of extreme weather events, such as Superstorm Sandy or the heat wave of 2003 in Europe, which killed tens of thousands of people. The costs of storms like Sandy are immense — New York will spend upwards of 35 billion dollars responding to the damages. This is serious money, and it is the cost of just one storm in one state! Hurricane Katrina racked up damages that are estimated at 100 billion dollars or more.

Because climate change has been and will certainly continue to be variable across the globe, the economic consequences are likewise variable. Some regions are likely to experience a net benefit in many respects, while others are likely to suffer much more serious changes that pose great economic threats. Warming in some areas might lead to a gain in some sectors of the economy, while in others areas, warming might cause a significant economic loss in that same sector. Our goal in this section is to get a sense of what these costs are on a global basis, without losing sight of the fact that the story varies from region to region.

In a general sense, the economists who study this problem tend to divide the costs up into market and non-market costs. A market cost is a cost to some part of the economy that could be quantified in terms of dollars, while a non-market cost is a something that is not easily quantified because there is no market for it. A damaged ecosystem like a coral reef is an example of a non-market cost. The damage to reefs has a cost and the cost is probably multifaceted and widespread, but it is not something that can be measured or expressed in dollars. So, let's try to list some of the important market and non-market costs and then get around to the tricky business of trying to figure out how it might all add up on a global basis.

All crops have an optimum range of temperature and precipitation and as these change throughout the globe, crops will either do better or worse. It is estimated that 80% of the global croplands and almost 100% of the global rangelands depend on rainfall, and as rainfall patterns shift, agricultural production will either increase or decrease. With temperature increases of less than 3°C, the agricultural impacts in the short term are mainly expected to be positive, but beyond 3°, the impacts will be mainly negative. It is likely that there will have to be shifts in the locations where we raise crops and graze animals, and those shifts will cost money as well.

As with agriculture, the consequences of climate change in the forestry sector of the economy will vary from place to place, but one important factor is the spread of new diseases into forested areas that will decrease the productivity of this part of the economy. The recent spread of the pine bark beetle in the western US and the resulting devastation of coniferous forests there is a good example of the potential for future damages. Nevertheless, it is estimated that on a global scale, the forestry sector of the economy will show slight improvements.

Although natural fisheries are in decline globally, the attribution of this decline to climate change is not at all clear. In some regions, the dependence of a fishery on a broader ecosystem such as a coral reef will make it vulnerable to increased warming and acidification. On the whole, it is expected that there will be a continued shift to farmed fish production from the oceans and this kind of managed food production appears to be less vulnerable to climate change.

Insurance is actually the largest single industry in the world and insurers are concerned about climate change because it is clear from their records of premiums collected and payments made in relation to weather catastrophes that they are losing their ability to effectively insure people against climate-related damages. The insurance industry is adapting and paying close attention to the relationship between global warming and more frequent severe weather events, but in the future, this will mean higher premiums and a greater cost to the economy.

Global warming and consequent sea level rise will place burdens of the system of roads, pipelines, water supply, water treatment, power transmission lines, etc., that make up the infrastructure of countries. Governments will have to spend more to keep these systems running and this will cause a drag on the economy.

As the climate warms, we will use more electricity for cooling and less energy for heating, but the balance will vary across the globe. For the US, the Environmental Protection Agency estimates that for a 1°C rise in temperature, we will use 5-20% more energy for cooling and 3-15% less energy for heating, so the net difference might be a very slight increase in energy consumption for cooling. It is interesting to note that the US is the largest user of air-conditioning in the world, but it is expected that China may surpass us by 2020. The best estimates on a global basis indicate that we will spend more on increased air-conditioning than we will save in reduced heating, so this is another economic burden.

In mountainous areas around the globe, more and more snow-makers are appearing, as ski resorts try to keep themselves viable by preventing the ski season from decreasing its duration. There are vast economic stakes in the tourism that is based on recreation of this type. Also, beach resorts face challenges from a rising sea level.

As the climate changes, human health will face challenges that will ultimately cost money. The spread of tropical diseases such as the West Nile Virus, into areas where these diseases were unknown before, make new demands on health care. Heat waves, which will likely become more severe and more frequent, can pose significant health risks (thousands died in France during a 2003 heat wave).

As glaciers melt and winter snows are diminished, an important source of freshwater will decline; as precipitation patterns change, surface water will decrease and groundwater aquifers will become depleted even faster. These costs are likely to be very significant in some regions, and those costs will undoubtedly be transmitted to the global economy in one way or another.

Summing up the Costs

Numerous economists have tried to sum up the costs of global warming, including William Nordhaus, who needed a formulation for these costs for his DICE model. In Nordhaus' view, the best way to do it is to express the damages as a percentage of the global economic output, and the relationship he adopted looks like this: 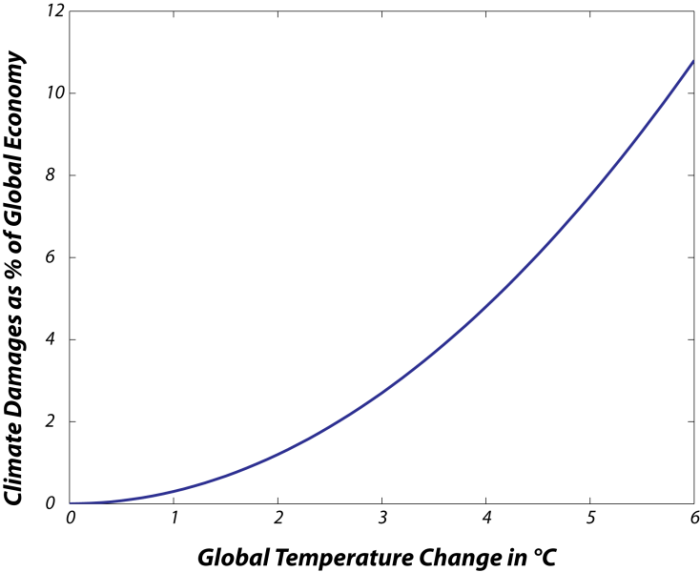 Damage due to climate change as a function of temperature change.
Credit: David Bice © Penn State University is licensed under CC BY-NC-SA 4.0

You can see that for a 4°C increase in global temperature, the climate damages amount to about 4% of the global economy, which puts Nordhaus' formulation in line with an estimate by the IPCC of between 2 and 5% for a 4°C rise. This is an exponential function so that the rate of increase in damages increases at increasing magnitudes of warming. Many people have suggested that this curve is probably too conservative at the high-temperature end, and that with such drastic levels of warming, we would experience much greater levels of economic damage.

It might seem like damages totaling 4% are not such a big deal, but consider that the recent devastating earthquake that hit Japan in 2011 caused damages equal to about 3% of Japan's GDP, and the country's economy was severely impacted.

‹ Assignments Roadmap up Abatement Costs: The Costs of Reducing Emissions ›