The Paleocene-Eocene Thermal Maximum (PETM) at 56 million years before present is arguably the best ancient analog of modern climate change. The PETM involved more than 5oC of warming in 15-20 thousand years (actually a little slower than rates of warming over the last 50 years), fueled by the input of more than 2000 gigatons (a gigaton is a billion tons!) of carbon into the atmosphere. The PETM was associated with the largest deep-sea mass extinction event in the last 93 million years and remarkable diversification of life in the surface ocean and on land. Because of its potential significance, geologists have swarmed to study the event and it's been the topic of great interest, and more than a little controversy, for the last 25 years. For this reason, also, we devote considerable attention to the event here. 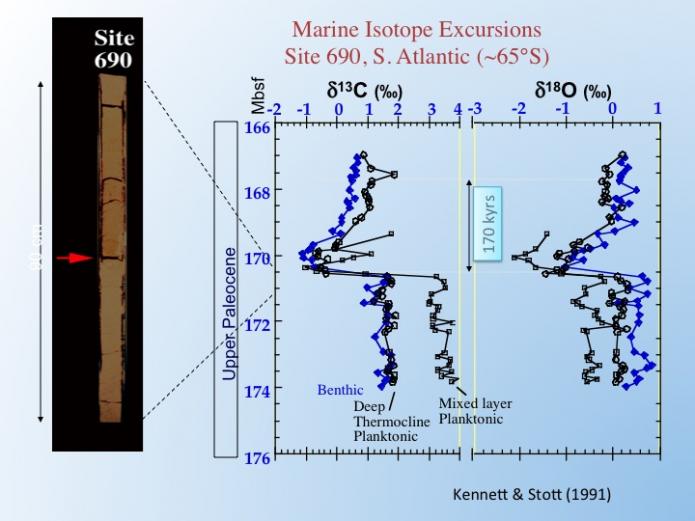 Evidence for global warming at the Paleocene Eocene thermal maximum from a core located off the coast of Antarctica.
Click for a text description of Evidence for Global Warming image.
The benthic foraminifera extinction is illustrated by the red arrow. Decreasing oxygen isotope values indicate the warming of the surface ocean (planktonic foraminiferal isotope values) and deep ocean (benthic foraminiferal isotope values). Decreasing carbon isotope values indicate the input of greenhouse gas from either organic (i.e. biological) or volcanic reservoirs. During 170k years C levels spiked, dropped but not to the previous level, O spiked and dropped back.
Credit: © Kennett & Stott (1991). Used with permission.

The evidence for warming comes from a variety of sources, the most compelling of which is the oxygen isotopes of planktonic and benthic forams in deep-sea cores. These data suggest significant warming of 6-8o C of ocean surface waters at a range of latitudes, as well as of deep waters. We don’t need to go into the detail here, but this converts to 4-5 oC of the average Earth temperature which is pretty significant. For comparison, global warming since the industrial revolution is about 1.2 oC. Today, warming is a result of human activities, but only very primitive primates were around at the time of the PETM, and they did not drive cars (!), so what caused the warming back then?

Corresponding to the oxygen isotope shift is a large and negative 4 to 5 per mil change in carbon isotopes that is used to define the geological extent of the event. The isotope excursion has been identified in sediments deposited in the ocean and those laid down in terrestrial environments such as lakes and rivers. It is called a golden spike because it can be correlated around the world and it marks a precise time horizon, in fact, the excursion is now the formal definition of the boundary between the Paleocene and Eocene eras. Moreover, the excursion in terrestrial sediments allows us to correlate the changes that occurred on land during the PETM with those that took place in the ocean. Below is what the PETM looks like in the Big Horn Basin in Wyoming. 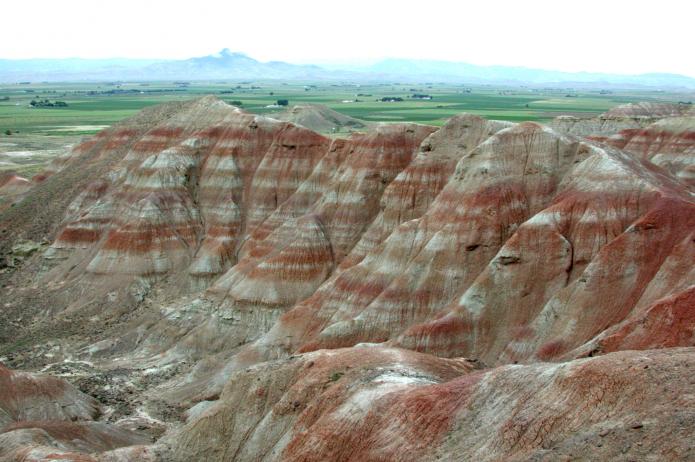 Photograph of the PETM in the Big Horn Basin, Wyoming. These rocks were deposited by rivers and on floodplains. They contain an amazing fossil record including early primates and leaves.
Credit: © Peter Wilf. Used with permission.

The content of CO2 in the atmosphere increased 3-4 times during the PETM. Regardless of whether it comes from cars, factories or from non-human sources, CO2 is a greenhouse gas and it causes the atmosphere to warm. As a consequence, surface ocean temperatures at the peak of the event were extremely warm, especially in the high latitudes. Off the coast of Antarctica, a location today that is close to freezing, the oceans were about 20oC (68 oF) at the peak of the PETM! Imagine jumping into the ocean from Antarctica today! Tropical ocean temperatures were really hot. A recent paper indicates that temperatures off the coast of West Africa were 36 o C which is 97 oF! Now I’ve been swimming in Miami in August and it feels like a bathtub at 88 oF, but 97 oF is virtually uninhabitable! The PETM was also associated with major changes in the properties of the deep ocean. Unlike today, when deep ocean waters are characterized by temperatures close to freezing, PETM deep waters were 10-15o C. This may not seem that warm all considering, but there is no doubt that is caused a fundamental change in the way circulation in the ocean worked. Sea level was quite a bit higher during the PETM, and the continents were in different positions as shown on the map below. 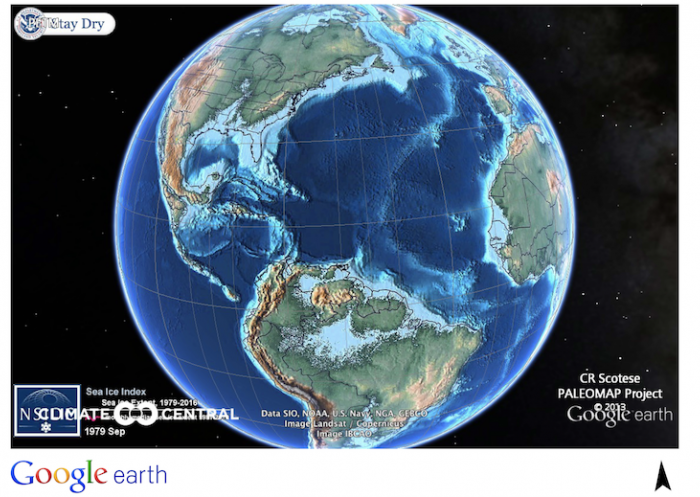 Map showing the distribution of continents around the Atlantic Ocean during the PETM. The map shows that sea levels were higher.
Credit: © Chris Scotese. Used with permission.

Likely, the cause of these warm deep waters was that they came from different surface ocean locations than they do today (see Module 6 for more detail on the sources of modern deep waters), combined with the warming that took place in the surface ocean. As warmer waters hold less oxygen than cold waters, PETM deep waters in many locations likely were possibly close to a condition that is known as hypoxia (we will learn more about this in Module 6). The word hypoxia does not sound too distressing but imagine for a minute that you are a fish and you needed oxygen for respiration. Hypoxia would have been truly awful for such a creature! Finally, the input of so much CO2 into the ocean caused ocean waters to become more acidic and led to a condition known as ocean acidification (sorry to keep jumping ahead but we will learn a lot more about this in Module 7!). Acidification of the deep ocean during the PETM is well accepted and is observed by complete dissolution of all CaCO3 shells that rained down on the seafloor. For creatures that require a shell for protection against predators and to protect the soft cellular parts from the harsh ocean, acidification would have been disastrous. By comparison, the shallow ocean experienced a much more minor decrease in its acidity and shelly creatures continued to thrive there. 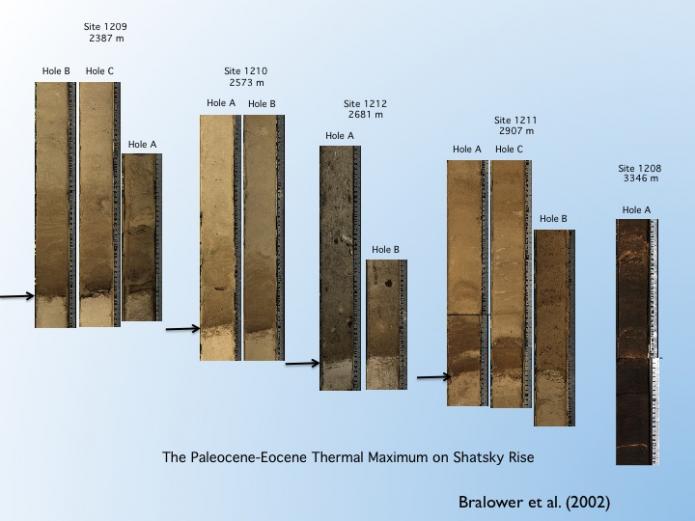 Photographs showing the Paleocene Eocene thermal maximum recovered in cores taken in the Pacific Ocean. The benthic foraminiferal extinction level is indicated by the horizontal arrow. The change in the color of the sediment is a result of deep ocean acidification.
Credit: Tim Bralower © Penn State University is licensed under CC BY-NC-SA 4.0
‹ Ancient Climate Events: Snowball Earth up PETM: Effects on Life ›