Tree rings have been widely applied in climate reconstruction. Rings are produced as a result of seasonal variations in the growth rate of tree bark. Wood produced during rapid growth, for example in spring in temperate regions, tends to be less dense than wood produced during slower growth phases during the late summer and early autumn. Where seasonal growth is highly variable as in temperate regions, rings are strongly etched in the bark. 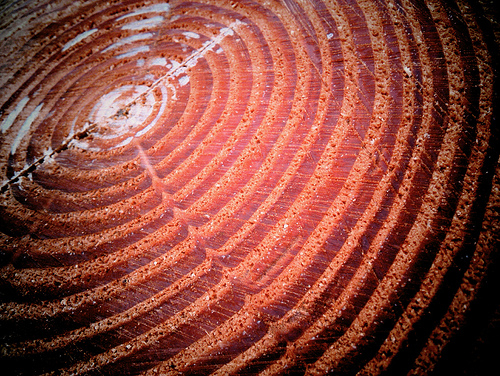 As shown in the image above, tree rings are especially powerful paleo climate indicators because the number of rings can be counted to determine the age of the tree or the age of the ring that is providing paleoclimate information. The width of tree rings can be interpreted in terms of temperature and precipitation variations; however, there are a number of factors that complicate this interpretation.

Tree rings preserve an amazing inventory of Earth's climate. This photograph shows a section through part of a tree, a living tree, and it contains dozens of tree rings. An individual ring consists of a lighter part and a darker part. The lighter part is preserved, or grown, during the rapid growth season in late spring and early summer, whereas the darker part, which is made of denser wood, hence its darker color, is grown, or preserved during the latter part of the summer and the fall. Combined, the light and the dark layer preserve one annual growth cycle of the tree. Therefore, the number of rings can be counted to provide an estimate of the age of the tree. Additionally, the thickness of the ring gives us a measure of the suitability for the growth of that tree at that time. So a thicker combination of light and dark indicates good growing conditions, such as warm temperatures and high rainfall, whereas thin rings indicate poorer growing conditions, such as colder conditions and a lower rainfall, or more arid conditions. Sometimes a tree doesn't grow at all during the year, in which case, the ring isn't preserved at all for that time period, and this would complicate using the number of rings for dating the tree. In temperate regions, tree rings are very well-preserved because the growth changes from summer to winter, whereas in tropical regions, rings are not as well-preserved because the tree is growing pretty well continuously.

Fossils represent the remains of life that once thrived in the oceans or on land. They range in size from dinosaurs to shells of clams and oysters, all the way down to microscopic remains of algae, fractions of a millimeter in size. Although many groups of fossils can yield information on climate and environment, in this module we focus on the fossil remains of plants as well as those of the microplankton and microbenthos. These microfossils include a number of key groups that live in the ocean and in freshwater bodies such as lakes. 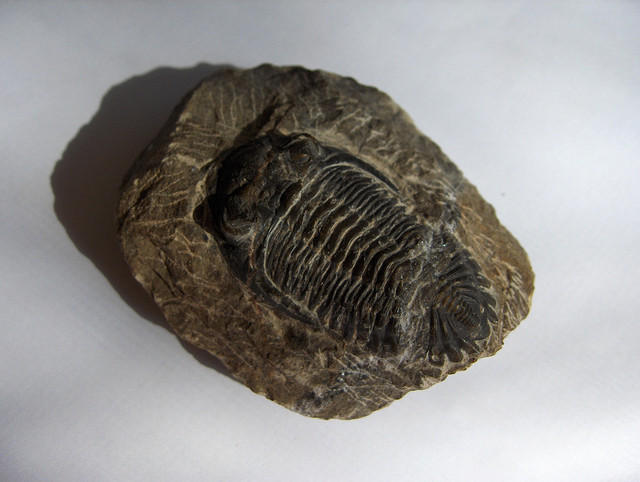 A fossil trilobite from the Paleozoic Era.
Credit: Trilobite by Joanna Bourne is licensed under CC BY-NC-ND 2.0

The diatoms are a group of plankton that makes their shell out of opal (microcrystalline SiO2). These organisms are autotrophic, meaning they fix CO2 dissolved in seawater or lake water via photosynthesis. The delicate diatom shell, or frustule, consists of two valves that fit together like a pillbox. The diatom cell lives inside the frustule and the plastids or chloroplasts use light as a source of energy in photosynthesis. Diatoms thrive where nutrient and silica levels are high: in lakes, the coastal ocean, and in the Southern Ocean, the ocean that circles the globe just north of Antarctica. Diatoms reproduce asexually (vegetatively), and, where conditions are right and nutrient levels elevated, diatoms can rapidly produce cell counts of many millions of cells per liter of seawater. In certain cases, as we will see in Module 7, these count levels are called red tides, and in some of these cases, diatoms produce toxins. 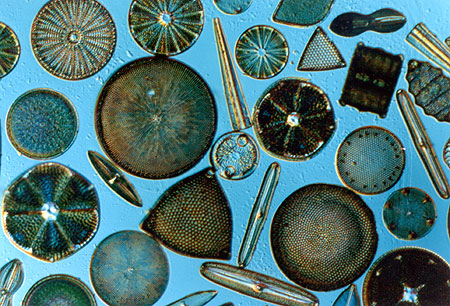 Microscopic shells made of opal produced by diatoms. The diameter of each shell is about a tenth of a millimeter.
Credit: The Academy of Natural Sciences 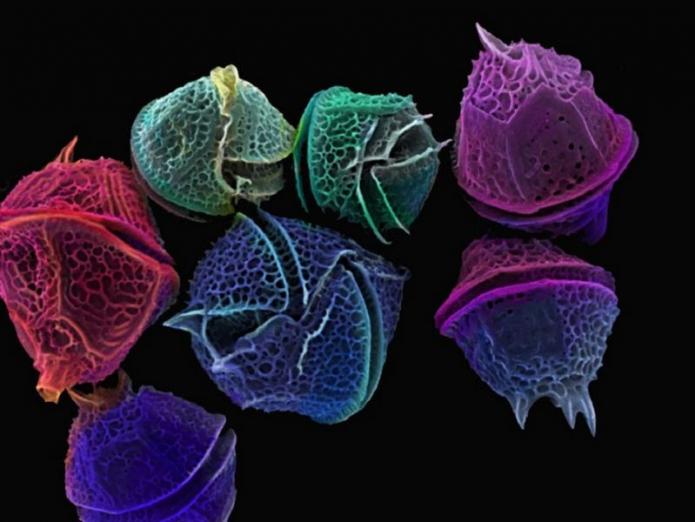 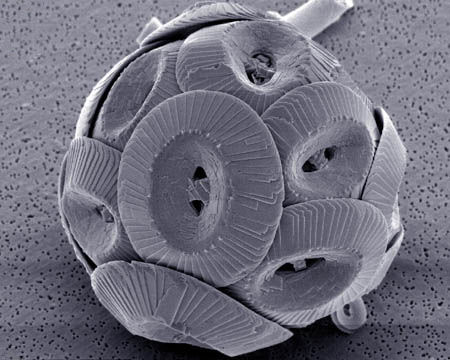 A coccolithophore of the species Coccolithus pelagicus
Credit: Wikipedia, licensed under CC BY 2.5

Pictures of Foraminifera and Coccolithophores

The foraminifera are zooplankton, meaning they consume tiny phytoplankton to get their energy. The foraminifera, or forams as they are known, make their shell out of calcite or CaCO3. The delicate foram shells have a variety of shapes and are adapted to the life mode of the individual species. The forams have two very different modes of life. The planktonic forams float passively in the water column, whereas the benthic forams live on the seabed, either resting on the bottom or burrowing into the soft sediment. The foraminifera have been critical in the reconstruction of ancient ocean temperatures via stable isotopes and trace element proxies, as we will see below.

The following video provides an overview of the foraminifera.

The radiolaria are zooplankton like the foraminifera. The radiolaria are one of the longest-lived plankton groups, extending back to the early part of the Cambrian period about 500 million years before present. The group makes a spaceship-like test out of opal (SiO2) and, like the diatoms, is restricted to places in the ocean where nutrient levels are elevated. The radiolaria thrive in the tropical regions where upwelling currents bring nutrients to the surface ocean. 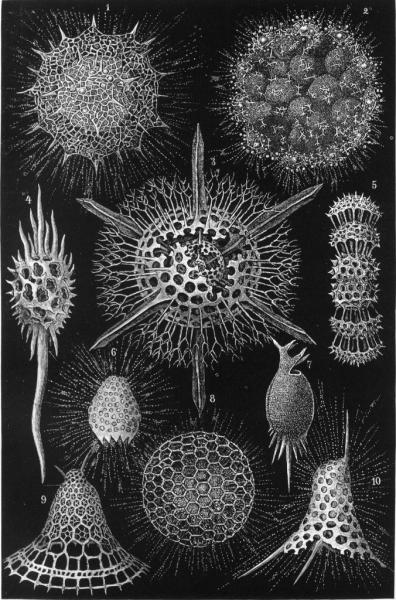 Microscopic shells made of opal produced by radiolaria. Diameters of the shells are about a third of a millimeter
Credit: Radiolaria by dedree drees is licensed under CC-BY 2.0

Plant fossils have been widely used in paleoclimate studies. These studies are based firmly on the distribution of modern plant species and on physical characteristics of those plants that are related to climate. The distribution of tropical plant species such as palms, cycads or groups of ferns can be used as evidence for warmer climates in the geologic record, for example, during the Cretaceous when these groups are found in places such as Alaska that have much colder climates today. Plants also provide more quantitative proxies. For example, the morphology of the margin and size of leaves is closely related to temperature and precipitation, respectively. Warmer climates tend to produce leaves that are smoother, whereas colder climates tend to produce leaves that are more jagged in shape. Wetter climates tend to produce leaves that are larger than drier climates with the same temperatures. Using the shape and size of leaves from modern locations with a range of temperatures and rainfall, equations relating margin and size to temperature and rainfall have been developed and these allow these climatic parameters to be determined from studies of ancient leaves. 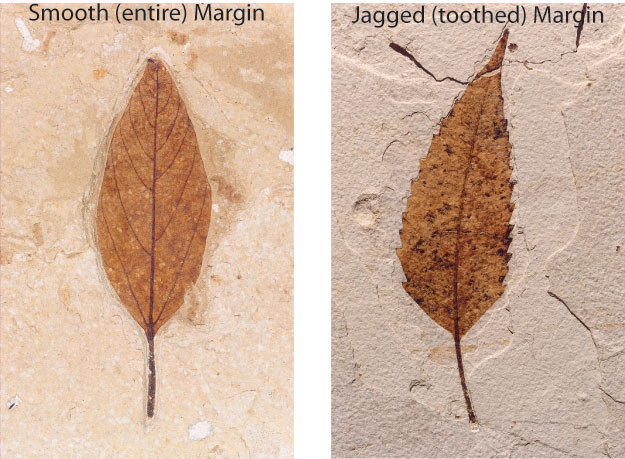 The density of the stomata, small pores typically found on the underside of leaves that provide a pathway for CO2 to enter the leaf, are related to the partial pressure of CO2. Thus stomatal density has been used as a proxy of ancient CO2

Certain types of sedimentary rocks are, by their very nature, indicative of certain climatic conditions. For example, in the arid subtropical regions, evaporation rates are so high that waters near the margins of the oceans readily evaporate. Once salinities reach certain levels, a sequence of minerals begins to precipitate directly from seawater. These minerals include gypsum (CaSO4H2O), anhydrite (CaSO4), dolomite (CaMg(CO3)2), halite (NaCl), and sylvite (KCl). The group of minerals is known as evaporites, and when found in the geologic record, are indicative of arid climates. Today the suite of evaporite minerals is being formed in the Persian Gulf. In the past, very thick sequences of evaporites were deposited in the Mediterranean during the late Miocene (6 million years ago), and in Texas and New Mexico during the Permian (250-300 million years ago). 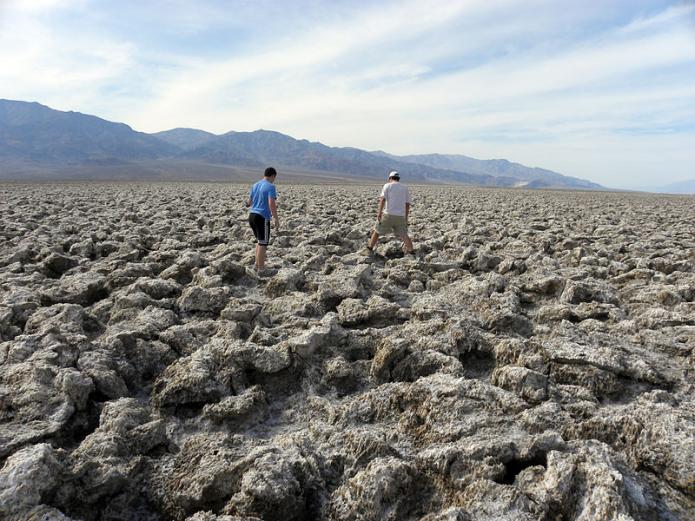 The evaporite mineral halite (NaCl) formed in Death Valley, California as a result of evaporation of an ancient lake
Credit: Devil's Golf Course by Mark A. Wilson, licensed under CC BY-SA 3.0

Just as evaporates indicate hot and dry climates, occurrences of coal in the geologic record suggest hot and wet climates. Today in tropical and subtropical regions with ample rainfall, trees, and other plants grow quickly. For example, tropical rainforest cover large areas in the Amazon basin, and mangrove forests grow along subtropical coasts in places like the Mississippi Delta and the coast of Florida. When this vegetation dies, it is rapidly buried in sediment in rivers, deltas, and beaches. Once encased beneath hundreds of meters of overlying sediment, and heated and pressurized over millions of years, the vegetation is transformed into coal. So just as evaporites are indicative of hot and dry conditions, coal is a sign of hot and wet conditions in the geological record. Please take a few moments to check out the photographic evidence below.

In the next stage of the module, we will consider a number of climate events that took place in the geological record. The events we chose to present have one thing in common; they begin very abruptly, thus they provide some lessons about modern climate change. The events include both warming and cooling intervals and span a large part of the geologic record from over 2 billion years ago to 8.2 thousand years ago.