Sections of ocean sediments have been sampled extensively by a suite of coring operations dating back to the 1940s. These operations include a variety of different drill ships as well as rigs like the ones that are used in oil exploration. In all cases, the retrieval of continuous cores from the seafloor requires a drill string, a continuous line of pipe that is assembled to extend from the ship or platform to the seafloor.

Once the drill string reaches the seafloor, a metal core barrel is lowered through the pipe to recover sediment. Typically each core that is extracted is between 2 and 10 m long. At the head of the core barrel, is the bottom hole assembly, a device that is positioned to cut the core. A variety of different techniques are used to cut sediment. Where the sediment is young and soft, as occurs in younger layers close to the seafloor, cores can be cut using a piston-coring device (see figure below). The piston is situated inside the core and it is triggered when the bottom hole assembly is close to the ocean bottom. When it hits the bottom, the piston rapidly moves up so the mud fills the empty pipe as it sinks. At the end of the bottom hole assembly is a drill bit that actually helps cut through the core. In the case of the piston core, the bit is a sharp, knife-like device that helps the rapidly advancing core cut readily through the soupy sediment. If the formation is harder, as occurs deeper in the sediment column where the overlying burial has led to compaction and cementation, cores can only be retrieved using a hard bit that cuts the rock by rotating at high speeds assisted by water, and, in some cases, drilling mud (this is known as rotary coring). Compared to the piston core which advances in seconds or less, this rotary coring can take a very long time, often up to an hour for each meter of core; moreover, some of the sediment can be lost during coring, as pressure from water or mud must be applied to cut through the rock. Once the coring mechanism is fully extended, a core catcher slips into place underneath the coring device and a wire line is used to retrieve the core to the ship or drilling platform. 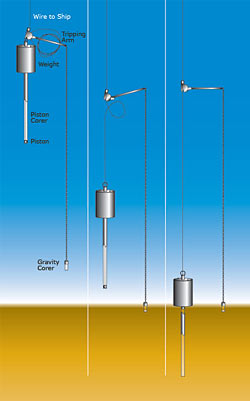 Probably the best-known and longest-running drilling operation, the Integrated Ocean Drilling Program (IODP) has been in operation for more than 40 years. The program began as the Deep Sea Drilling Project in 1969 and is a collaborative scientific operation between a number of different countries. The ship chartered by the program is the JOIDES Resolution, a highly sophisticated drilling platform that has the ability to take cores in locations where the ocean is 6000 meters deep. The ship is about 150 meters long with a drilling derrick that is about 50 meters high. The deepest hole drilled by IODP exceeds 2000 meters. The ship can operate in stormy seas with large waves and strong currents as it is held in position by powerful turbines, and the drill pipe is stabilized by a device called a heave compensator that keeps the drill bit on target even when the ship is listing. The Resolution has berths for about 120 engineers, scientists, drilling “rough necks,” and caterers, and typically stays out to sea for six- to eight-week expeditions. 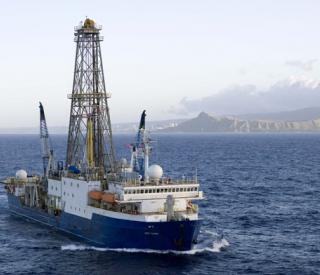 The JOIDES-Resolution drillship, the platform used by the Integrated Ocean Drilling Program to extract cores from the ocean depths. The ship is 170 meters long and houses over 150 scientists and engineers.
Credit: JOIDES-Resolution, National Science Foundation (Public Domain)

As we will see below, valuable information about Earth’s climate has been obtained by drilling in the ocean basins. However, rocks that were deposited in continental environments and marine sediments that have been uplifted onto the continents via plate tectonics also provide important information about past climates. These rocks are much more readily accessible and can be sampled in road cuts, stream beds, and many other places. In addition, sedimentary rocks on land can be sampled via coring with much less expense than their oceanic counterparts. 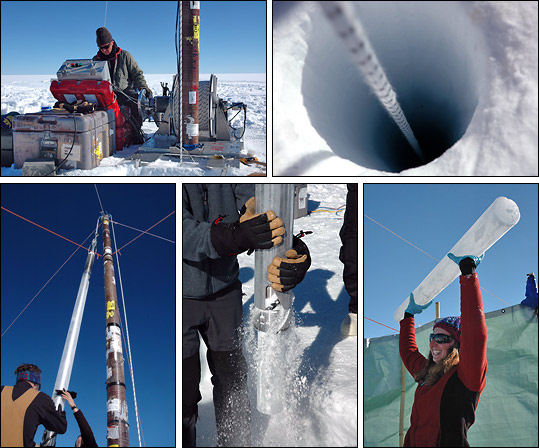 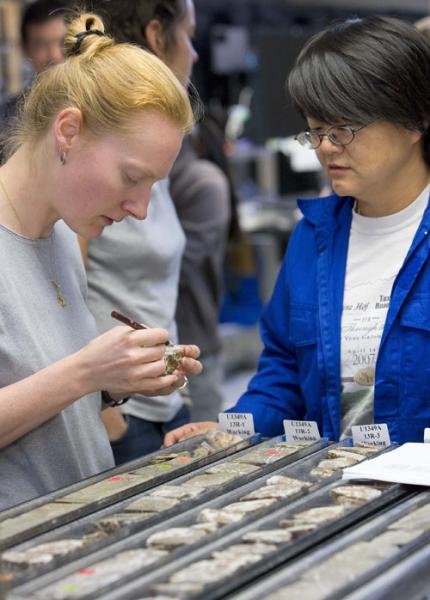 Over the long term, cores of sediment are usually kept in refrigerators to keep them from drying out. Cores of ice are housed in warehouse-sized refrigerators that are cooled to -30oC. The longest ice core sampled is the three-kilometer long Dome C core from Antarctica that extends back some 750,000 years.

The following video provides an excellent overview of how cores are collected by the Integrated Ocean Drilling Program. Click the play button in the center of the video to watch it.

Video: Core on Deck!: The Journey of how the Samples travel from the Rig Floor to the Core Lab (7:26)

Core on Deck!: The Journey of how the Samples travel from the Rig Floor to the Core Lab
Click here for a transcript of the Core on Deck! video.

Hi, my name is Tim Brock. I'm an assistant lab officer on the Joides Resolution. My job here is to supervise a group of marine lab specialists and to ensure that the core that we've brought up is processed in a timely manner and accurate manner. Joides Resolution or the JR, as we call her, is 470 feet long 70 feet wide and can drill in 29,000 feet or 8800 meters of water. The Joides Resolution and the research it supports make up the integrated ocean drilling program. It all began with the Mohole project in the 1950s and that showed deep-ocean drilling to be a viable means of obtaining geological samples. Ocean drilling has the advantage in that the samples are undisturbed from atmospheric and surface conditions and that provides a better geological record. The sediment and the hard rock that we harvest are in the form of cores, and locked within them is no less than the history of our planet. Each expedition has been carefully chosen by an international group of scientists, for its scientific value and its location. They are currently exploring the Bering Sea and its unique formations which lie underneath its waters. Harvesting the core is an immensely complex process. I'm standing on the core receiving platform, or the catwalk, as we call it, and I'm here to explain one small part of the process: how the core gets from the rig floor to the core receiving platform, to the core laboratories. Voice over a loudspeaker: On deck, grande. Those words announce the arrival of the core barrel from its long journey from the seafloor. Contained inside are answers to the questions which the scientists seek. The cutting shoe is removed from the end of the core barrel. It contains a core catcher which secures the sediment-filled core liner inside. The core catcher is taken to a bench to be disassembled. Next, the liner is removed. The 10 meters of core is carried to the core receiving platform. The technicians must work quickly as another coring tool is already on its way down to the seafloor. There is only a limited amount of time. The core liner must be cleaned, cut, curated, engraved, and labeled before the next core hits the rig floor. The core is measured, to be cut into 150-centimeter sections. A specialized cutting tool is used to cut the core liner. Now, the core is more easily handled. Here, a microbiologist cuts the core with a sterilized spatula and take small plugs of sediment. This sediment will be tested for the presence of microbes living at extreme environmental limits. A sample of sediment is given to a paleontologist. Microfossils found within are used to determine the age of the sediment. The remaining sediment is carefully repackaged into a section of core liner. The core liner section is sealed with colored end caps, indicating the orientation of the core. Acetone is applied to the end cap and seals the cap to the liner by chemically melting the plastic. At last, the sections are taken into the core lab. Each section has its unique core number and section number engraved into the core liner, and a barcode label attached. So, there you have it. The ship never sleeps. We drill 24 hours a day seven days a week. This happens hundreds of times over a normal two-month expedition. Thanks for your time. I've got to get to work.