At the other end of the temperature spectrum from the PETM are the Snowball Earth events that occurred in the Proterozoic Era (543 million to 2.5 billion years ago), a time when only very primitive organisms inhabited the planet and oxygen levels were considerably lower than today. The aptly named Snowball Earth represents some of the most bizarre climate conditions ever experienced by the Earth, with strong evidence for ice sheets in equatorial locations. The evidence comes from sedimentary layers with a mixture of fine particles and large boulders, that look just like the rocks deposited by modern glaciers. These layers are found at locations known to be near the poles, which is not surprising, but also at those that are thought to have been near the equator, which is really unusual. This apparent global distribution of layers is why the events are termed "Snowball Earth". The main snowball events occurred about 2220 million years ago (2.22 billion), 710 million years ago and 640 million years ago. 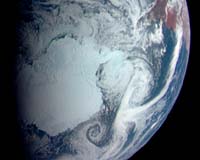 Reconstruction of the globe covered in ice during a Snowball Earth event.
Credit: NASA (Public Domain)

Underneath and at the front of modern glaciers lie thick sediments that are characterized by a wide mixture of different grain sizes from clay all the way up to large, angular boulders. Very similar, jumbled rocks are found in the Snowball events. It is not a surprise that such deposits exist at high latitude locations where large ice sheets have existed at a number of times in the past. What is so unusual is that glaciers are thought to have covered the tropics. Continents have been moving throughout geologic time, so it's natural to ask how we know the locations of Snowball deposits back in the Proterozoic. The best evidence for this is the orientation of magnetic grains in the sediments.

The earth has a magnetic field that is driven by motions of fluid iron in the outer core. This magnetic field acts like a simple bar magnet with motion lines traveling through the center of the earth then wrapping around the earth, pointing back towards the North Magnetic Pole, as shown in this diagram. As we can see, if one is standing close to the equator, the field will be fairly flat. Whereas if one is standing close to the pole, the field will be much more vertical. This direction is called the inclination. The magnetic field of the earth is captured in sedimentary and igneous rocks, at the time of their deposition and formation. That means geologists can capture these rocks or sample these rocks, take them to the lab and measure the field when they were formed. If the field is flat, that means the rocks were formed closer to the equator and if that inclination is closer to vertical, that means that the rocks were formed close to the poles. For the snowball earth hypothesis, it is very very interesting that many of the rocks that capture glaciation, that contained evidence of glaciation, were formed close to the equator with flat inclinations, and this is one of the major pieces of evidence that glaciers covered equatorial regions during the snowball earth.

So how cold was the Snowball Earth? If, as it appears, the planet was covered by ice from pole to pole, all of the sun’s radiation would be reflected back to space and temperatures must have been frigid. Models suggest that the global average temperature was about -50oC and the temperature at the equator would be similar to that at the poles today, about -20oC. With these conditions, most parts of the planet would have been under ~1 km of ice. With no ability to retain heat, it is hard to imagine how Earth recovered from a Snowball event, but surprisingly the end of the glacial events appear to have been extraordinarily abrupt.

An integral part of the Snowball story is that the glacial layers are overlain by layers called cap carbonates, shown in the image to the right. These layers contain no glacial material at all, being composed entirely of the minerals calcite (CaCO3 and dolomite (CaMg(CO3). These carbonates look like they were deposited in relatively shallow water on platforms in a similar setting to the modern-day Bahamas. The carbonates often have large ripples formed by strong underwater currents, as well as evidence for bacterial activity. 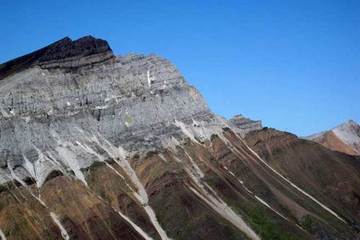 Maroon glacial deposits at the base of the photograph from a 716 million-year-old Snowball Earth event in Yukon province Canada. The gray unit at the top of the photograph represents the terminating cap carbonate event
Credit: Francis Macdonald, Science Daily

The juxtaposition of glacial deposits and cap carbonates have fascinated geologists and spurred a lot of debate. Among the major questions that have been puzzled over are how glaciers could have melted so fast and how such concentrated carbonate material could have been deposited. The abrupt melting of ice must have been driven by the build-up of CO2in the atmosphere. Atmospheric CO2 is provided by processes such as volcanism, which presumably continued during the Snowball. CO2 is removed by processes such as photosynthesis and weathering of rocks, however, neither of these processes would have been active during a Snowball. Thus it is thought that CO2would have risen unchecked to a point when a super greenhouse radiative effect was triggered, global temperatures rose rapidly, and the ice melted. 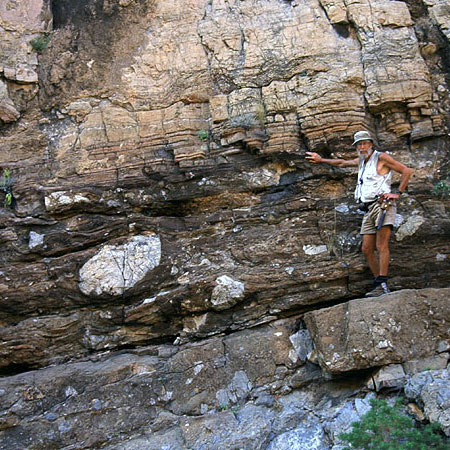 Boulders are indicative of glacial deposition in Snowball Earth sediments from Namibia, southern Africa. The tan rocks at the top of the photograph show the sharp transition to the cap carbonate layer
Credit: Michael Hambrey from Glaciers Online

The origin of highly concentrated carbonate is likely connected to the ability of weather reactions to increase the saturation of minerals such as calcite and dolomite in the ocean. Perhaps more perplexing is how life, primitive as it was at the time, survived on a glacial planet. Available fossils suggest that organisms at the time included both cyanobacteria that used chemicals as a source of energy and also red algae that used light. Microbes are known to exist close to the surface of modern glaciers. Perhaps the ice was considerably thinner near the equator or possibly there were small ice-free refuges. The Snowball remains a fascinating climatic puzzle. 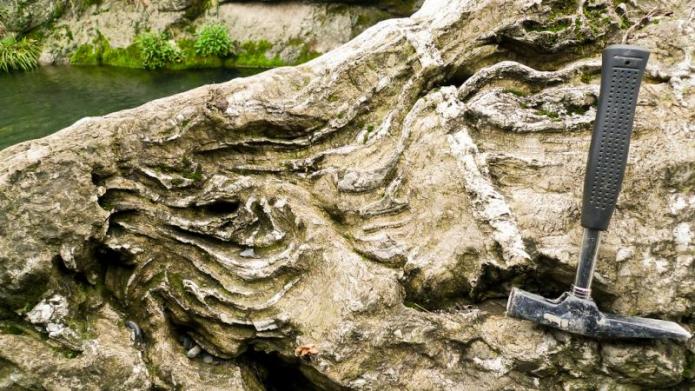 Cap carbonates overlying the Snowball Earth glacial deposits. These layers are from 600 million-year-old rocks from China.
Credit: Yangtze Platform from Flickr is licensed under CC BY-NC-ND 2.0