Corals and coralline algae are not the only organisms highly susceptible to ocean acidification. Coccolithophores, foraminifera, pteropods, three very different groups of plankton (a term that refers to organisms that float passively in the upper ocean) are also threatened by increasing atmospheric CO2 levels. Pteropods, often called sea butterflies, are tiny snails made of aragonite that thrive in shallow waters and play a particularly important role in polar ecosystems. 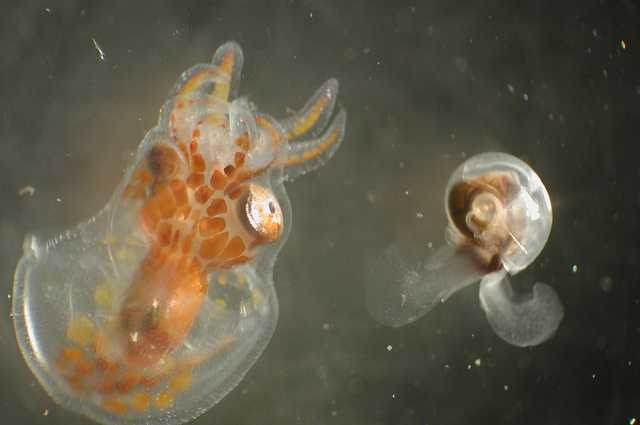 Pteropod on the right and a very small octopus on the left
Credit: Photo by Matt Wilson/Jay Clark, NOAA NMFS AFSC from NOAA Photo Library on Flickr (CC BY 2.0)
​​​​​​

Because of the susceptibility of aragonite to decreasing saturation levels combined with the effect of temperature (calcification requires more energy in cold water) on saturation, pteropods may cease to exist in polar latitudes by the middle of the 21st century. In some polar areas, these organisms account for over 60% of the zooplankton biomass, thus their extinction or migration to warmer regions could have major repercussions to organisms up the food chain.

The coccolithophores and foraminifera are constructed of low-Mg calcite and therefore are more stable than pteropods under conditions of increasing CO2.

The planktonics are sensitive to changes in CO2, have shown subtle changes in shell mass during the Pleistocene in response to CO2 fluctuations, and have already begun to get lighter in response to recent CO2 increase. This recent thinning of shells is likely a result of the effect of decreasing CO32- on calcification by foraminifera. Interestingly, many planktonic species also harbor dinoflagellate symbionts that play a role in calcification. Changes in calcification appear to be a threat to the planktonic foraminifera, but we do not yet know how serious this threat is. However, we do know that the foraminifera are also threatened by the potential loss of their dominant source of food, the coccolithophores, as a direct result of CO2 addition. 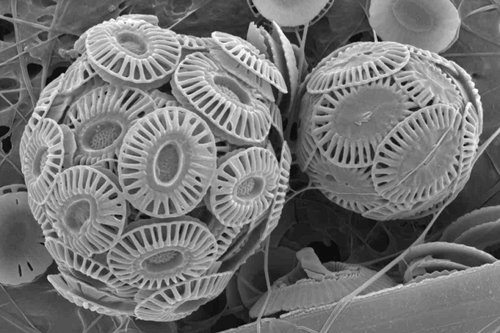 Coccolithophores are ubiquitous in the oceans, essentially serving as the dominant species of phytoplankton in vast regions of the open ocean that are characterized by lower nutrient levels. For this reason, considerable attention has been devoted to the potential effects of increasing CO2 on the coccolithophores.

Coccolithophores are haptophyte or golden brown algae (similar to diatoms) that produce tiny calcite scales known as coccoliths during certain phases in their life cycle.

The plates are several microns in diameter and can remain attached to the cell covering the soft organelles with a protective shield or break off after they are fully grown. Coccolithophores reproduce asexually, and, given the right conditions have the potential to multiply rapidly. When conditions are suitable, coccolithophores can form blooms of millions of cells per liter of seawater. These organisms are consumed by foraminifera and copepods, and transported to the bottom of the ocean as marine snow.

Marine Snow
Click here for a transcript of the marine snow video.

Because of their prolific production and global distribution, coccolithophores are a vital part of the carbon and carbonate cycle of the oceans. Modern coccolithophorids are dominated by the species Emiliania huxleyi, a species with very small (1-2 micron) and delicate coccoliths. Due to their size and ecology, coccolithophores are inherently more difficult to study in the natural environment than are corals. However, samples can be collected using filters and cores of sediments can be studied to determine the effects of past changes of CO2 on coccolithophore morphology. Coccolithophores can also be cultured in the laboratory where CO2, CO32- and pH levels can be altered to observe the effect of these variables on calcification. Although the results of both field and lab studies are by no means simple, it appears that in the case of E. huxleyi, increasing CO2 and decreasing CO32- has the effect of causing thinner coccoliths with smaller masses. In addition, laboratory studies show that such conditions also lead to malformations in E. huxleyi coccoliths, which are a potential sign of difficulty in calcification. Such trends of decreasing mass are by no means universal, however. Some lab experiments and field collections in particular environments show that species other than E. huxleyi actually grow thicker in low CO32- conditions and even E. huxleyi recently has increased in mass in parts of the ocean. More study is required to determine the precise outcome of the coccolithophores in a high CO2 world. However, the current signs generally point to significant reduction in the rate of calcification, which could lead to significant changes both in marine ecosystems and in the carbon cycle.

The following video, Climate Change and Ocean Acidification, by San Francisco State University clearly captures this problem and explains the ramifications on the ocean and the atmosphere.

Narrator: At San Francisco States Romberg Tiburon Center for environmental studies, scientists are finding out how a one-cell marine organism will adapt to growing ocean acidification. They're focusing on a microscopic phytoplankton that is a power player in the ocean's ability to absorb greenhouse gases.

Edward Carpenter, Professor of Biology, San Francisco State University: It's been estimated that this organism probably is involved with about 85% of the transfer of carbon from the surface waters, those greenhouse gases down into deep water. If it wasn't for phytoplankton doing this, and organisms like Emiliania Huxleyi, we would basically be cooked.

Tomoko Komada, Professor of Chemistry, San Francisco State University: Ocean acidification is a consequence of increased atmospheric CO2 levels, which is caused by continued burning of fossil fuels by human activity. So, once carbon dioxide is in the atmosphere, it'll dissolve into the surface oceans. And when it does, it produces carbonic acid, a weak acid, and as a result of that, the surface seawater, the pH of the surface seawater, is driven towards relatively acidic values.

Edward Carpenter: By the end of the century, carbon dioxide is expected to rise to about seven hundred to a thousand parts per million.

Jonathan Stillman: The potential solution to having an increased amount of CO2 in our atmosphere is to take that CO2 and put it back where it came from, which is trapped deep in our planet. And in fact, a lot of fossil fuels are probably derived from phytoplankton of millions of years ago. So, what we've been doing is culturing these cells, the coccolithophores, under conditions of present-day pH and year 2100 projected pH.

Tomoko Komada: The way we did that was to first create the atmosphere that's projected for the end of the century. And we took some surface water from the present ocean and bubble that with the future atmosphere.

Jonathan Stillman: But from our lab studies what we would predict is that is that there would be less, these coccolithophores would have less ballast. They'd be making less inorganic carbon and less ballast to drag down some of that organic carbon. And so, the cells would eventually be transporting less CO2 from the atmosphere down into the deep ocean.

Edward Carpenter: The ramification is that the ocean is not going to be helping us to combat the increase in the greenhouse gases. The ocean will be much, much less capable of drawing the through the organisms that are in it, drawing the CO2 out of the atmosphere and transferring it to deep water.

Narrator: The team's findings have implications for other important ocean systems, including the food chain. They hope these findings will contribute to future public policy regarding the reduction of greenhouse gases.

Coccolithophores have a spectacular 220 million year fossil record. This record allows paleontologists to observe the effects of past climate change, including increasing CO2, on the livelihood of this group of plankton. Ancient global warming events, including those at 120 million years before present and 55 million years before present, have been gleaned for evidence of ocean acidification in the morphology of coccolithophores. The event at 120 million years shows evidence for a decrease in coccolith size, but this change is not apparent in the 55 million year event. As the species existing during these ancient events was entirely different from those at the present time, it could be that ancient species responded in a different fashion from those living today. Alternatively, the changes in ancient plankton assemblages may be in response to environmental variables other than CO32-, for example, temperature and nutrients. The coccolithophores, like the corals, have been able to survive intervals of great ecological upheaval in the past. However, given that the rates of modern environmental change are so rapid compared to ancient events, we cannot assume that these same groups will have the ability to adapt to the changes that are to come. Moreover, while the coccolithophores appear to be less endangered by increasing CO2 than the corals, largely as a result of their mineralogy, the impact of the decline of these vital algae would likely be even more devastating to the oceans.