Red tides are common events in warm and polluted coastal oceans. They form when dinoflagellate algae explode to huge population levels. Because the dinoflagellates have red plastids, the waters literally turn red. Dinoflagellates take advantage of harsh environmental conditions that kill off other organisms. As you will find out in the pages to follow, these tides can be major public health hazards. 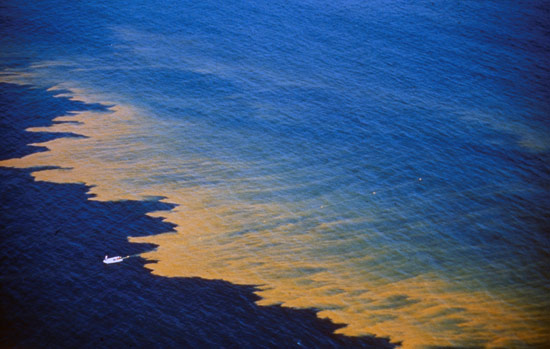 I remember that the grouper was delicious. Blackened, spicy, with an ear of corn and some slaw. On a white paper plate. I polished it off with a Heineken. It was a warm early January day, a seafood festival in Florida City. We went canoeing after lunch. I remember waking up the next morning with an intense thirst and extreme nausea. When I tried to get out of bed, I sprawled on the floor, my left side was completely paralyzed! I rolled to the sink, crawled up, and poured myself a glass of water, I gulped it down, and to my horror, it felt boiling hot! The neurological symptoms soon went away, but nausea and fatigue lasted weeks, I lost at least ten pounds. The doctors took that long to diagnose the problem---I had Ciguatera poisoning. That delicious grouper had ingested a lot of toxic dinoflagellates and transmitted the toxins to me. My first experience with harmful algae.

Red tides represent one of the most serious threats to coastal ecosystems today. Most red tides result from the input of an excessive amount of nutrients from fertilizers, sewage, and soils of nearby land areas to bays, estuaries, and shallow seas. These nutrients cause explosive growth of microscopic species of algae, a number of which carry toxins that are harmful or even lethal to other organisms. Red tides can be caused by major storms such as hurricanes, which cause excess runoff from the land and resuspension of the seed stages of the algae.

Red tides occur when dinoflagellates, and rarely diatoms, grow in massive quantities in surface waters. The photosynthetic organelles of these organisms, known as plastids or chloroplasts, are red, or golden brown in the case of diatoms, and the profusion of cells in surface waters imparts a red or brown color. Some of the culprit dinoflagellate and diatom species produce by-products that are highly toxic to many other organisms living in the coastal zone, all the way from fish to turtles to large mammals such as dolphins, manatees, and whales, as well as to humans. In some cases, shellfish or small fish such as sardines that consume the plankton are not harmed by the toxin but concentrate it for organisms that feed on them, a process known as bioaccumulation. Ingestion of the toxins can result in developmental, immunological, neurological, and reproductive damage of the host organism. For this reason, red tides are also known as harmful algal blooms (HABs). In fact, we will use the term HAB here because these events are not associated with ocean tides, because many HABs are not associated with a red color, and because blooms of dinoflagellates are often not harmful.

Examples of Dinoflagellates and Diatoms

Harmful algal blooms are a global phenomenon and have increased in frequency in the last thirty years. Part of the increase may result from awareness of the phenomenon, but increasing pollution is also considered responsible. There are a number of reasons why climate change may further increase the occurrence of HABs. For examples, the increase in the frequency of large storms such as hurricanes will lead to greater runoff and input of nutrients from land. In addition, changes in temperature, wind patterns, upwelling, and stratification will alter the distribution of species. Because the degradation of a large amount of cellular material produced in HABs consumes oxygen, HABs can result in hypoxic or anoxic conditions.