Species are amazingly resilient to environmental change. We know this from the groundbreaking paleontological compilation of the global diversity of genera by David Raup and Jack Sepkoski from the University of Chicago (illustrated below). The compilation, based on a tabulation of all of the occurrences of fossil genera in the paleontological literature, shows millions upon millions of years with relatively low extinction rates punctuated by five intervals with extremely high rates. These five intervals represent major mass extinctions that had a profound impact on the history of life. 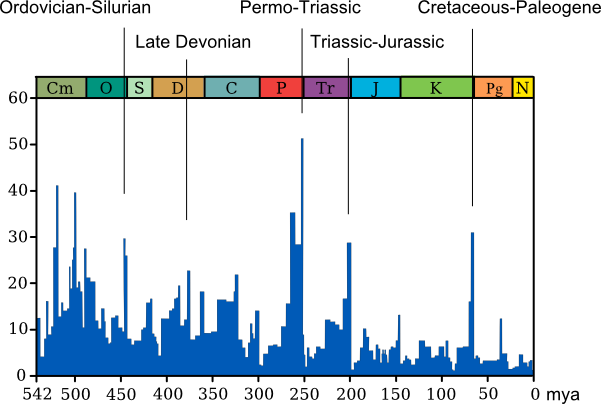 The five great mass extinction events, loss of genetic diversity is plotted on y-axis and age in millions of years before present on x-axis. Data from Raup and Sepkoski (1982).
Credit: A modified version of Extinction Intensity.svg from Wikipedia  (CC BY-SA 3.0)

The three youngest mass extinction events were caused by extraordinary perturbations to the environment, associated in two cases (the Permian-Triassic and Triassic-Jurassic) by gigantic volcanic eruptions, and in the Cretaceous-Paleogene by the impact of a 10km wide asteroid with the Earth. The exact cause of death (referred to as the killing mechanism) of species during these events is still hotly debated, however.

In the case of the Permian-Triassic event, by far the most severe mass extinction in Earth history, when up to 96% of marine and 70% of terrestrial species were eradicated, it is possible that many species were asphyxiated or poisoned by low oxygen and excessive amounts of hydrogen sulfide and CO2. For the Triassic-Jurassic event, ocean acidification is the purported cause. And in the case of the Cretaceous-Paleogene boundary, a combination of repercussions of the impact, weeks to months of darkness, global wildfires, ocean acidification, and metal poisoning, were likely responsible. The survivors of these events were either uniquely adapted to the environmental perturbations or lived in a refuge and escaped the extremity of the geologic conflagration. For example, the dinoflagellates, the same organisms that are responsible for modern red tides (Module 7), survived the Cretaceous-Paleogene event by resorting to their resting stage, while the calcareous plankton, including the coccolithophores and planktonic foraminifera (see Module 1) were nearly rendered extinct. The deep-sea benthic foraminifera also went through the Cretaceous-Paleogene relatively unscathed as their habitat was not perturbed to nearly the same extent as the surface ocean and land.

Now, the species that went extinct during these mass extinction events were hit with environmental perturbations so severe that they could not adapt to them. By comparison, species have been able to adapt much better to more typical climate changes that have occurred during the majority of Earth history, and this explains the more modest background extinction in the compilation. Faced with environmental change, a species has three choices, in the words of biologist G. R. Coope from the University of London: adapt, move or die. The key part of any species’ survival is that it has developed tolerance to a range of environmental conditions, and if conditions change slowly enough, most species have the ability to adapt. If it cannot adapt, it can certainly move. If it cannot move any further, as we will see later in the module, it will become extinct.

In the paleontological record, species have gone extinct as a result of climate change because their populations have become so isolated that they cannot maintain a population size to remain viable. Frequently, it is likely that climate has caused the change of some other type of environmental variable that has led to the extinction. And in almost all cases, competition with other species for resources has ultimately caused the species’ demise.

Even though there are millions of extinct species to study in the paleontological record, and paleontologists have devoted a great deal of attention to unraveling the causes of their demise, we still cannot determine the exact reason for the extinction for the vast majority of them. Solving this puzzle requires constraining the environment at the time of the extinction while proxies on which we rely for environmental information generally cannot give us sufficient detail on the range of parameters we require. More seriously, the geological record generally only provides us with time resolution at the millennial scale, while the fatal environmental changes likely occurred over decades and centuries.

As we will see in the remainder of this module, ecologists are making incredible progress understanding the causes of the demise of modern species. However, even with its shortcomings, the paleontological record offers important information about adaptation, species resilience, and their extinction risk. Times in the past when the climate warmed very rapidly, such as the Paleocene-Eocene thermal maximum (PETM) (Module 1), are of particular interest.

So, now, let's see how humans are causing the sixth largest mass extinction.

‹ Assignments Roadmap up Causes of Extinction ›