Polar bears, perhaps the fiercest predator on Earth, are rapidly becoming one of the most vulnerable victims of climate change. The significant threat to populations is a direct loss of changing habitats and reduction in prey. Polar bears hunt ringed and other species of seals through the sea ice and cover large areas during their winter hunting season. In summer when the ice cover recedes, bears fast. Bears catch their seal prey through breathing holes, waiting often for hours or days for the seal to emerge and quickly biting it on the head, pulling it out of the hole and crushing its skull. Bears hunt on what is known as annual ice (i.e., ice that forms in winter and melts in summer) rather than permanent ice because it is thinner and more easily punctured by seals. They feast on the seal fat and blubber because it is easy to digest and a good source of energy. Bears are generally opportunistic hunters, meaning they eat most types of readily available food. Rarely, they feast on beluga whales and walruses. While on land, bears will hunt reindeer, birds, and rodents; they will also eat vegetation and garbage when hungry.

Polar bears spend the autumn and winter on moving ice floes and ice pack following seal populations. They can find themselves several hundred of miles away from land. A typical bear can have a range of up to 350,000 square kilometers! They are adapted to extremely cold temperatures with two separate layers of fur and a thick 4-inch layer of blubber underneath. Their clear outer layer of fur provides them with an excellent camouflage for hunting. A male bear can weigh over 750 kilograms. 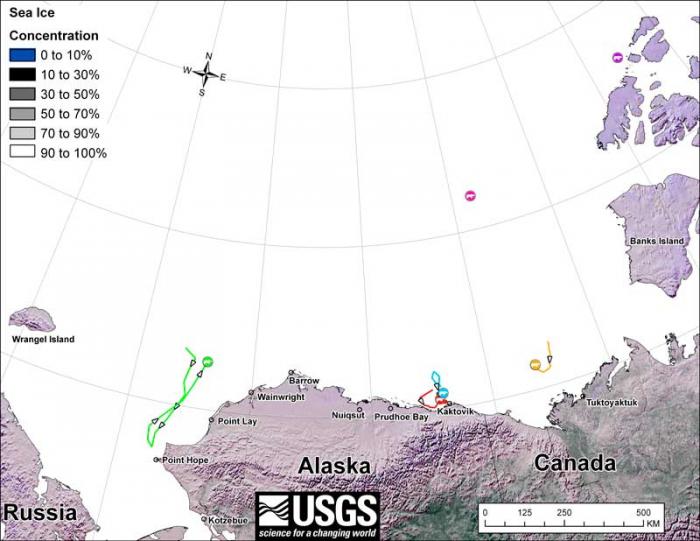 Movements of 6 satellite-tagged polar bears for the month of February 2013.
Credit: USGS

In the spring and summer time, polar bears retreat to land or permanent ice and fast on the energy reserves they have generated during the winter. It is during this time of year that females reproduce with a gestation period of eight months. During the winter, the female bear builds a den for delivery of up to four cubs the following spring. She also spends much of this time in hibernation. Bears have to consume very large amounts of food to maintain their lifestyle and also to make it through the long winter. Females, in particular, must maintain a high body mass to reproduce. On average, a bear must catch a seal every week or so during the summer to thrive. Females often refrain from mating if they do not have substantial food sources or the necessary fat reserves. And even if they do reproduce, cub survival rates may be reduced. 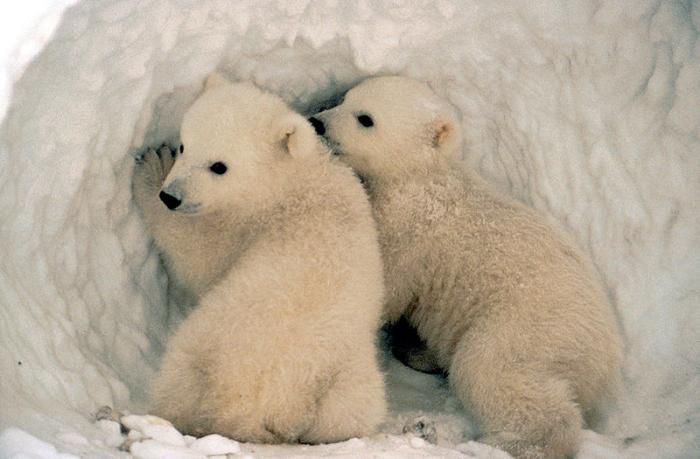 Polar bears live in groups called populations in the US, Canada, Russia, Norway, and Greenland and are rapidly becoming a victim of disappearing sea ice. As sea ice thins, bears may actually have an advantage hunting, as seals can be detected more readily through the thin cover. Some years in the late 1970s were banner years for polar bears for this reason. However, as the recession of sea ice has accelerated in the last few decades, polar bears have been forced to retreat to land earlier in the season to avoid being stranded on ice floes. A female bear needs to weigh above 200 kg to sustain herself during hibernation and pregnancy, and her cubs after birth. With insufficient body mass and energy reserves, females cease to reproduce. Data show that the average weight of female polar bears has been decreasing steadily towards this 200 kg threshold, A female reproduces every two to three years and only five times in her lifetime. Thus when females delay reproduction for one or more years, bear populations can decline rapidly. Thus, the polar bear population is extremely vulnerable to climate change. 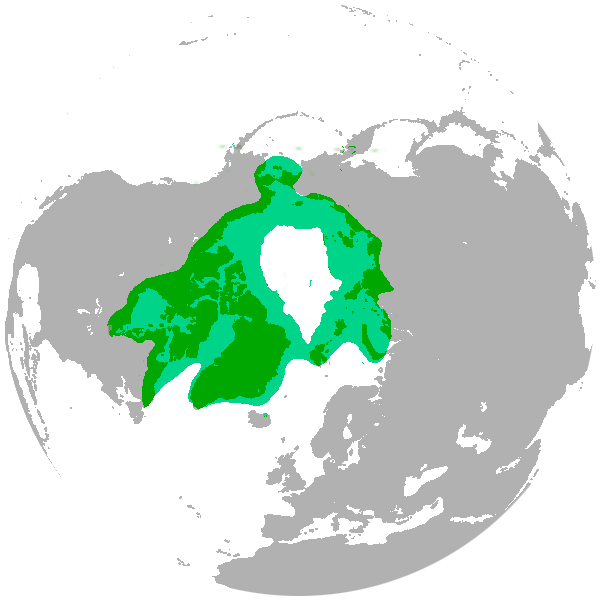 Polar bears have increasingly encroached on settlements surrounding their habitat in search of human garbage. This has led humans to kill dangerous bears. Moreover, climate change has also caused grizzly bears to migrate and put them in competition with polar bears for resources.

The outlook for polar bears is bleak. Today the total population is between 20,000 and 25,000, but seven of the 19 bear populations are known to be in decline and predictions are for numbers to decline by 7000 to 8500 in the next 30 years. The shrinking sea ice habitat will threaten bear populations near the south of their range and only the northern populations will likely hang on well into the future. Various counties and agencies have listed the polar bear as threatened and endangered. 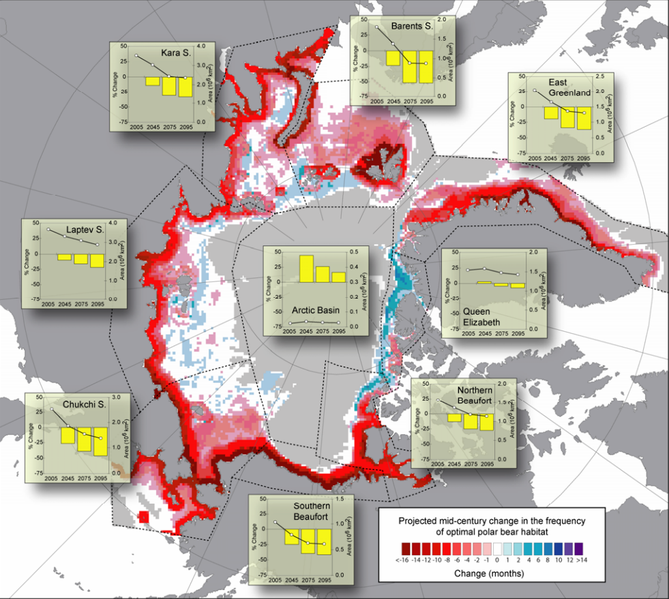