Bird populations around the world face a series of profound threats. Climate change and associated modification of the landscape is playing a major role in isolating bird populations and may play a huge role in the future. Development and conversion of agricultural land and forest to urban areas are literally isolating bird populations on "islands", making them vulnerable to extinction. This is increasingly significant as the largest threat to birds today is not related to climate, but caused by humans and domestic animals.

In terms of sheer numbers of casualties, domestic and feral cats pose an enormous threat to bird populations. Introduced by humans either to help keep mice and rat populations at bay or merely for companionship, cats are natural hunters of small mammals and birds. Domestication in cats has not resulted in the same level of changes in behavior and anatomy as it has in dogs, so cats have maintained their ability to hunt and to survive in the wild, and still reproduce readily with feral cat populations. Domestic and feral cats possess strong night vision, a keen sense of smell and an ability to hear high-pitched sounds. Cats’ paws and claws are designed to keep very quiet when stalking prey. Once the prey is caught, the cat typically breaks its neck with its sharp canine teeth and its powerful jaws. In a nutshell, domestic and feral cat populations are lethal hunters.

Cats’ hunting ability and the threat to birds has long been appreciated, but only recently are we gaining an understanding of the magnitude of this threat. Cameras mounted on cats, together with extensive field studies, have provided more accurate estimates of the carnage, and it is staggering. In the US alone, cats kill between 1.4–3.7 billion birds annually, with feral populations accounting for the majority of that number. Each owned cat kills an average of between 4 and 18 birds and each feral cat between 23 and 46 birds per year. Translate these numbers globally, and the problem is clearly massive.

Although domestic and feral cats represent a major threat to wild bird livelihood, the extinction risk is hard to determine at this point. For one, in the US at least, the list of prey species is extensive with no particular species impacted significantly more than others. However, the largest threat certainly exists on islands where populations are isolated or on the mainland for species that are already endangered. 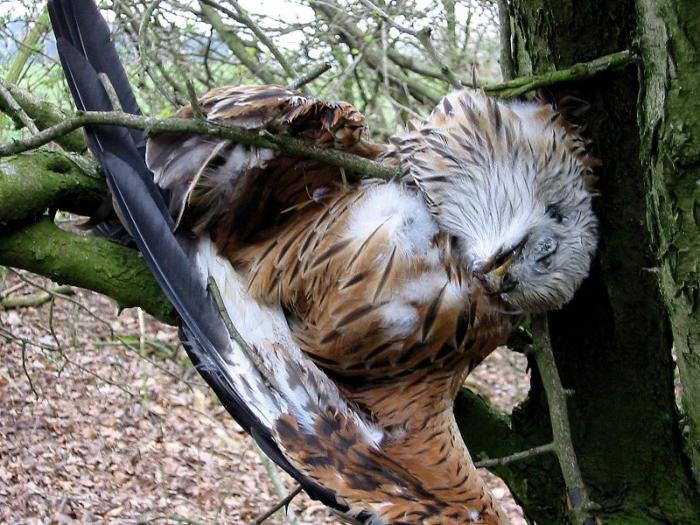 Besides owning cats and letting them roam outside, humans are responsible for bird mortality in many other ways. An area of responsibility that has received a lot of recent press is wind farms. There have been numerous reports that wind turbines caused a significant number of bird and bat deaths either from direct impact with blades or indirectly by disruption of their flight paths. However, reports of significant mortality have been contested, and it appears that if wind turbines are sited away from migratory paths and from endangered species, they pose no greater threat than other man-made structures. In fact, because of their sheer number, collisions of birds with buildings, especially windows, pose a much larger overall threat.

For a number of reasons, the habitat of birds is under assault. Humans are clearing areas of forest at unprecedented rates for agriculture and urbanization. Urban sprawl is eating up forest and grasslands. Both of these activities are eradicating sensitive bird habitats and threatening populations. Not all habitat change is bad for birds; there are some cases where clearing has been advantageous for bird species. However, more often than not, habitat loss causes a fragmented bird population that can begin the downward spiral towards extinction. 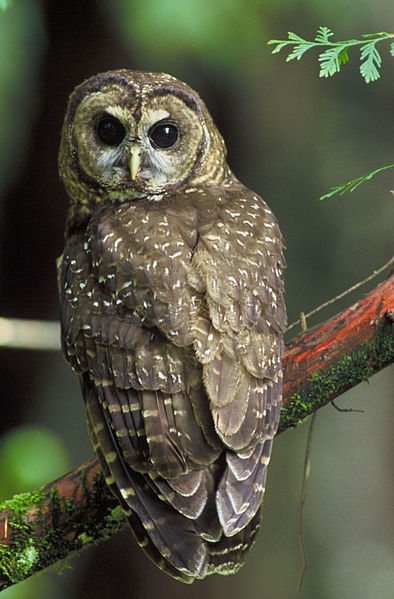 No example epitomizes this problem better than the Northern Spotted Owl of the Pacific Northwest of the US. This beautiful species has been thrust into the battle between the logging industry and developers that seeks to remove the lush cedar, fir, hemlock, and spruce forests in which it nests and forages, and conservationists who are desperately trying to protect it. The billion-dollar logging industry has removed about 90% of the original “old-growth” forest, and the number of spotted owls has dwindled to approximately 2,000, most of them inhabiting federally-owned lands. After years of politically charged debate, the spotted owl was designated as an endangered species in 1990 and lumber companies were required to leave 40% of the old growth forests within 2 km of all spotted owl nests.

The spotted owl controversy is an interesting ethical debate. Should saving an endangered species prohibit the livelihood of citizens? It has been estimated that protection of the owl has cost billions of dollars in losses to the logging industry and over 25,000 jobs. On the other hand, it has been estimated that continued logging at the rate before the regulations were imposed would have removed all forest in about thirty years and forced all the mills to close anyway. The debate will certainly continue. Meanwhile, even with protection, the Northern Spotted Owl remains in rapid decline especially in the northern part of its range. In British Columbia, there are only 20 breeding pairs left, and the species is predicted to be locally extinct in a few years.

Probably the most serious habitat loss for birds, as for many other groups, is in the Amazon. A third of all birds reside in the largest tropical rainforest in the world. Deforestation of the Amazon (as we observed in Module 10) has removed twenty percent of the original rainforest, and the rate is truly staggering, a football field area worth every minute! In the next 20 years, estimates are for a further twenty percent of the forest to be removed to create land for cattle grazing and growth of crops. Much of the clearing has been done by large commercial agribusinesses.

Besides removing nesting sites, clearing has destroyed food sources and made the remaining forest more susceptible to drought. Bulldozers and chainsaws used to clear land have caused noise pollution, fires have caused air pollution, and roads have disrupted habitats. The impact on birds and other creatures has been staggering, with 100 species now on the endangered list, ten of them critically endangered, meaning that extinction is likely.

One bird that has just been added to the list is the Rio Branco Antbird, a small bird that, as its name implies, survives on ants. This species is losing its battle with agribusinesses consuming its forest habitat in Northern Brazil and southern Guyana at a rapid clip. Based on current rates of deforestation, the bird will become extinct within twenty years if measures are not taken to preserve its habitat.

However, the risk of deforestation is not just for native birds. The area is a major winter feeding place for birds that breed in temperate latitudes in North America and South America. The impact of habitat loss on these species is hard to determine, however.

Islands represent some of the most delicate ecosystems to human destruction because migration is difficult and sometimes impossible. In fact, humans’ arrival on islands in the Pacific including Hawaii and Fiji 4000 years ago led to the extinction of about 169 species of large birds through habitat destruction and hunting. In New Zealand, one in four bird species has been wiped out since humans populated the island. The main victims are flightless birds such as the giant moa that can’t escape predators readily, as well as birds that nest on the ground or lay few eggs.

The grey colored Dodo Bird was approximately 3 feet tall, had a long hooked bill, yellow legs, and a tuft of curly feathers high on its tail (all known from drawings). It lived in New Zealand, Mauritius, and Micronesia, and was thriving when humans arrived in the 17th century, along with a brood of domestic animals. The Dodo was not accustomed to these newcomers and, because it was unable to fly, it became a very vulnerable prey. Accounts indicate that pigs, in particular, ate the bird and its eggs, and that humans cut down its forest habitat. The Dodo was completely extinct within decades of humans arrival. 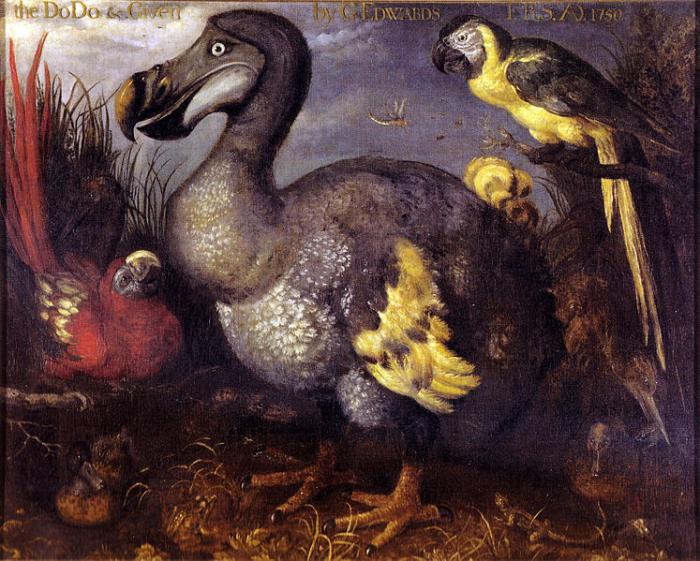 Current global estimates are for ten bird species each year to go extinct unless humans make major modifications in behavior and put more resources towards conservation of at-risk species.

‹ Collapse of the Honey Bees up Amphibians ›