For the last 250 million years of their 350 million years evolutionary record, amphibians have been vulnerable to a number of natural threats. The group evolved in the Devonian and were one of the main predators on land for the first 100 million years of their range. However, after that point, the amphibians gave rise to the more versatile reptiles that rapidly diversified and became dominant. Since that time, amphibians, including frogs, toads, and salamanders, have occupied a very specialized niche. Today, this niche is becoming increasingly vulnerable to climate change and a litany of other human inflicted problems. Nearly 500 species of amphibians are threatened today. 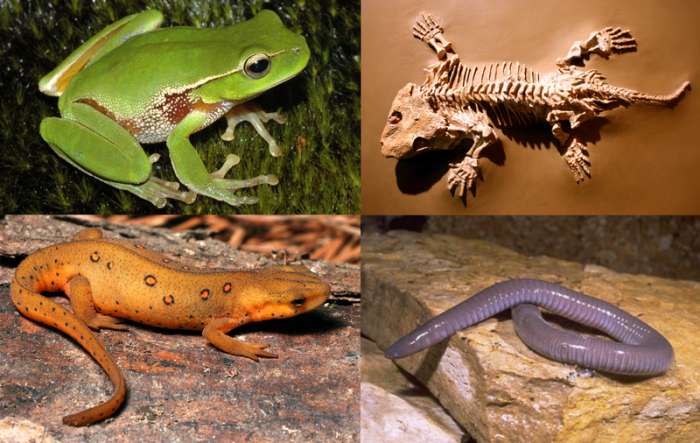 The basis of an amphibians’ existence is the need to reproduce in water or in a moist substrate. The group lays gelatinous, unshelled eggs that readily desiccate. When the amphibians evolved from the fish, this strategy gave them the ability to search for new sources of food, namely plants on land. Thus, even though amphibians could forage away from the water, they had to return to it to reproduce. Later on, some amphibian species developed the ability to lay their eggs in moist substrates such as leaf litter. Because of their need to be near moisture for reproduction, a key amphibian habitat is rainforests and cloud forests in tropics. These regions are thought to host the highest amphibian diversity on the planet, with the Americas hosting half of the global diversity.

Today, the amphibians are as threatened as any other group and the numbers of potential species extinctions are at the center of global diversity loss. The causes of diversity loss and extinction are complicated and likely to be synergistic (a term that means acting in concert with one another). However, one of the key threats is periodic drought in temperate, and especially tropical, areas related to climate change.

The Case of the Golden Toad

As we have seen in Module 4, periodic drought is an integral part of climate change even in the lush rainforests of the world. One of the most diverse amphibian habitats known is in the Monteverde Cloud Forest in Costa Rica. This is an area that, until recently, had a high amphibian species diversity, including species that are endemic to the region. This diversity has encouraged a great deal of ecological investigation. Periodic drought in Monteverde related to the ENSO cycle, and reduction in the area of moist clouds to higher elevations, has put pressure on the amphibian habitat. These dry conditions limit the reproduction of amphibians in bodies of water or leaf litter and thus species are forced to shift their habitats to moister higher elevations. In many cases, these higher habitats are already occupied by other species. Drought may have caused dehydration, alternatively, it may have made frogs susceptible to a pathogen. Monteverde has lost 40% of its frog and toad species since 1987, including the famous Golden Toad. The Golden Toad which was endemic to Monteverde is one of the surest identified victims of extinction. In 1987, 1500 individuals were observed in breeding pools, however, the spring was dry and few tadpoles developed. The following year, only one Golden Toad was observed in the same location and the last sighting occurred in 1989. The species is now officially extinct. Drought appears to be the trigger of the Golden Toad extinction, but it did not cause it. The chytrid fungus, which is thought to thrive in drought causes a fatal skin disease that eventually causes convulsions, skin loss, and death.

‹ Birds up Human Impact on Amphibians ›