After reading this section, you should be able to describe how energy is transferred via conduction, as well as discuss the speed of the process and where in the atmosphere it's most relevant. You should also be able to discuss the term thermal conductivity, and discuss the role of conduction in creating nocturnal inversions.

We've already talked about how the earth's surface warms or cools in response to absorption and emission of radiation at the surface, but radiation processes by themselves don't determine the temperature of the air. Now we need to discuss other ways that energy from the earth's surface is transferred to the atmosphere, namely "conduction" and "convection." We'll start with conduction, which as you're about to see, is "a touchy subject."

Our odd mixture of wildly dancing teenagers and slow-dancing retired couples illustrates the idea of conduction--the transfer of energy by contact, via molecular collisions. For a visual example, check out the short video below (1:33).

Conduction is the transfer of heat energy by the kinetic motion of atoms in a substance. Remember that all atoms have motion of some sort. This is true even for atoms that make up a solid. In this animation, note that the atoms in the bar of metal are vibrating slowly due to their relatively low temperature (in real life, I might add, atoms are vibrating at tremendous speeds, so this is just a representation). Now watch what happens when I slide the bar of metal into a furnace.

Notice that as the metal heats up, the atoms at the end of the rod begin to vibrate faster. The faster vibrating atoms transfer some of their energy to the slower adjacent atoms. Thus, the slower atoms also vibrate faster, giving them a higher temperature. This is conduction.

I should also mention that conduction works to cool an object as well. When a slower vibrating atom is next to a faster vibrating one, we’ve seen that the slower atom takes some of energy from the fast atom. This makes the slow atom vibrate faster BUT, it also slows down the faster vibrating atom, cooling it. If there are MANY, MANY more “cooler” atoms than warmer ones, then the net effect of the energy transfer is to cool the warmer atoms back to a temperature equal to its surroundings.

Keeping with our dance-floor metaphor, what happens when a relatively warm object comes into contact with a cooler object? Not surprisingly, the warmer object gets colder as its wildly dancing molecules lose kinetic energy when they collide with the slower dancing molecules of the colder object. In turn, the colder object gets warmer as it gains kinetic energy during contact.

For example, your hand feels cold when you grasp a metal object in your apartment or house. That's because metal has a high thermal conductivity (a measure of a material's ability to conduct heat energy). In other words, metal conducts kinetic energy rapidly away from the fast-vibrating molecules in your skin. As a result, your hand feels cool.

Unlike most metals, air has low thermal conductivity. That's why porous materials such as wool (porous means that there are small pockets for air to occupy) are effective thermal insulators. Given air's low thermal conductivity, it shouldn't come as a surprise that conduction between the ground and the overlying air proceeds at a relatively slow pace. To get a sense of what I mean, suppose you were to press a slab of wood a few inches thick against a hot burner on your kitchen stove that is much too hot to touch. The temperature of the wood in contact with the oven burner is very close to that of the burner (thanks to conduction), but the top of the wood slab can be touched without any pain. Why? The block of wood takes time to heat up because wood has a relatively low thermal conductivity, causing the transfer of molecular kinetic energy through the thickness of the wood to be slow.

The low thermal conductivity of the wood slab on your kitchen stove is akin to a slab of air overlying the hot ground on a sunny summer day. After sunrise, the ground typically warms rapidly as it absorbs relatively intense solar radiation, and incoming solar energy concentrates in the first few inches of the ground (even on a sunny, hot day, you don't have to dig very far to reach cool soil). In turn, a very thin layer of air in contact with the ground warms dramatically via conduction, albeit rather slowly.

On paved roads, temperatures in this thin layer of air can reach as high as 140 degrees. Air temperatures at nose-level, however, are, say 85 degrees, marking a rapid drop-off with height. Hot bare feet (ouch!) but tolerable nose-level temperatures prevail, in part, because of the air's low thermal conductivity. 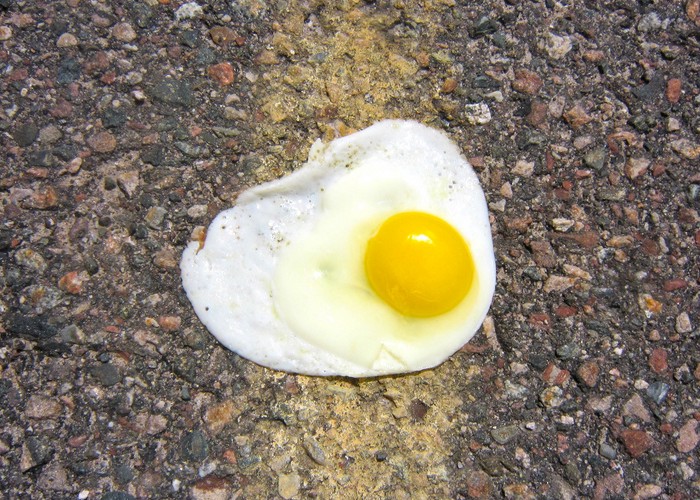 Perhaps you have you heard someone say "It's so hot you could fry an egg on the pavement!" It turns out that although Earth's surface (especially solar radiation-absorbing black surfaces) can indeed reach temperatures near 140 degrees Fahrenheit, it's still not quite hot enough to fry an egg. Here, the photographer admitted that she "helped" the egg out a bit.
Credit: IT IS SO HOT........ / Kate Ter Haar / CC BY 2.0

Conduction also plays a role on clear, calm nights in creating relatively large vertical temperature variations near the ground. Thinking back to energy budgets, you know that the ground routinely starts to cool after the sun sets on a clear night because it emits more radiation than it gains from the atmosphere. In other words, the temperature of the ground starts to lower because it runs a radiation deficit. In turn, a thin layer of air next to the ground starts to cool by conduction as a transfer of heat energy takes place from the initially warmer air to the cooler ground. This downward transfer of heat energy serves only to slightly slow down the cooling rate of the ground, which continues to lose more radiation than it receives. 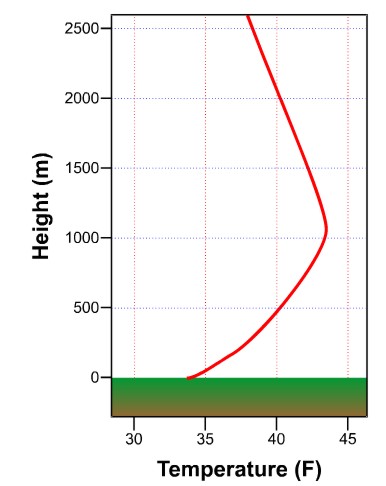 A nocturnal temperature inversion is marked by an increase in temperature with increasing height above the earth's surface. They form most often on clear nights with light winds.
Credit: David Babb

On a clear night with light winds, the delay in cooling the air not in contact with the ground often results in the air temperature increasing with increasing height above the ground. This vertical temperature profile is called a nocturnal inversion, "nocturnal" meaning occurring in the night and "inversion" referring to the fact that temperature increases with height in the atmosphere. As we'll discuss later, temperatures usually decrease with height in the lower part of the atmosphere, so inversions are contrary to that "typical" state.

To understand how a nocturnal inversion forms, remember that the net radiation loss at the surface (and resulting cooling) is indirectly driving the cooling of the air above. When downwelling IR is small due to a lack of clouds, the cooling rate at the surface is maximized, and once the ground begins to cool, a thin layer of air in contact with the ground turns colder and denser as energy is transferred down to the ground via conduction (heat energy is transferred from the initially warmer air to the colder ground). As a thin layer of "cool" air in contact with the surface develops, the result is that the layer of air just above it remains warmer, so then that layer also begins to cool via conduction as heat energy is transferred downward. The process continues, causing the "cool" layer of air in contact with the surface to thicken, but it's a relatively slow process because of the air's low thermal conductivity. Eventually, temperatures start to decrease even at the level where temperatures are officially measured (about 5 feet above the ground) and modestly higher altitudes. Meanwhile, warmer air resides above the deepening layer of nocturnal chill. Here, the downward heat transfer is painstakingly slow because of the thickness of the insulating layer of air below it.

The bottom line is that on a clear night with calm (or very light) winds, nocturnal inversions often form via conduction and temperatures near the ground actually increase with height. The requirement of a clear sky should make sense to you because it maximizes the ground's radiation deficit and subsequent cooling to get the process started. But, what's up with the requirement that winds be calm (or very light)? Indeed, a windy night disrupts the processes that help form the nocturnal inversion, and that leads us to our final method of energy transfer--convection. Read on.