After reading this section, you should be able to describe what is displayed on infrared satellite imagery, and describe the connection between cloud-top temperature retrieved by satellite and cloud-top height. You should also be able to discuss the key assumption about vertical temperature variation in the atmosphere that meteorologists make when interpreting infrared imagery.

Visible satellite imagery is of great use to meteorologists, and for the most part, its interpretation is fairly intuitive. After all, the interpretation of visible imagery somewhat mimics what human eyes would see if they had a personal view of the earth from space. But, visible satellite imagery also has its limitations: it's not very useful at night, and it only tells us about how thick (or thin) clouds are.

By limiting our "vision" only to the visible part of the spectrum, we diminish our ability to describe the atmosphere accurately. Consider the images below. The image on the left shows a photo (which uses the visible portion of the spectrum) of a man holding a black plastic trash bag. On the right is an infrared image of that same man. Notice that switching to infrared radiation gives us more information (we can see his hands) than we had just using visible light. Furthermore, the fact that the shading in the infrared image is very different from the visible image suggests that perhaps we can gain different information from this new "look."

Looking at the same image in both the visible and infrared portions of the electromagnetic spectrum provides insights that a single image cannot. Likewise with remote sensing of the atmosphere. By gathering data at multiple wavelengths, we gain a more complete picture of the state of the atmosphere.
Credit: NASA/JPL-Caltech/R. Hurt (SSC)

Before we delve into what we can learn from infrared satellite imagery, we need to discuss what an infrared satellite image is actually displaying. Just like visible images, infrared images are captured by a radiometer tuned to a specific wavelength. Returning to our atmospheric absorption chart, we see that between roughly 10 microns and 13 microns, there's very little absorption of infrared radiation by the atmosphere. In other words, infrared radiation at these wavelengths emitted by the earth's surface, or by other objects like clouds, gets transmitted to the satellite with very little absorption along the way.

You may recall from our previous lesson on radiation that the amount of radiation an object emits is tied to its temperature. Warmer objects emit more radiation than colder objects. So, using the mathematics behind the laws of radiation, computers can convert the amount of infrared radiation received by the satellite to a temperature (formally called a "brightness temperature" even though it has nothing to do with how bright an object looks to human eyes). Finally, these temperatures are converted to a shade of gray or white (or a color, as you're about to see), to create an infrared satellite image. Conventionally, lower temperatures are represented by brighter shades of gray and white, while higher temperatures are represented by darker shades of gray.

While visible satellite images pretty much all look the same, that's not the case with infrared images (see the montage of images below). Some infrared images are in grayscale so that they resemble visible images (upper-left), while others include all the colors of the rainbow!  Such infrared images that contain different color schemes are usually called enhanced infrared images, not because they are better, but because the color scheme highlights some particular feature on the image (usually very low temperatures). There's really no fundamental difference between a "regular" (grayscale) infrared image and an enhanced infrared image; the coloring does not change the data it is presenting. The key with any IR image is to locate the temperature-color scale (usually on the side or bottom of the image) and match the shading to whatever feature you're looking at. Here are the uncropped images for the "traditional" IR image and lower-right "enhanced image", for reference. 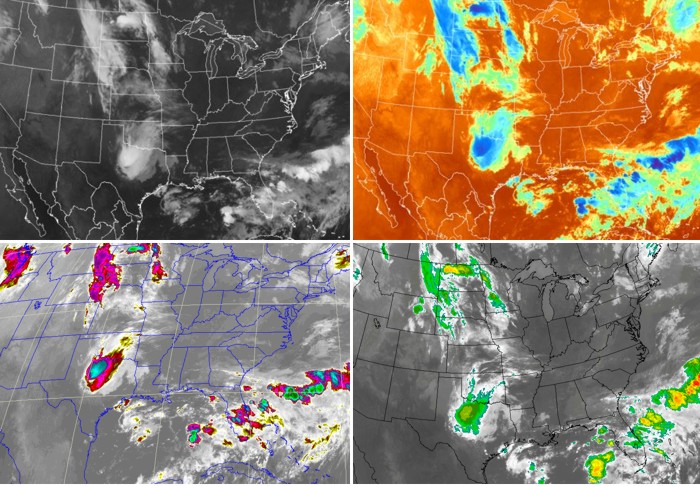 So, we know that an infrared radiometer aboard a satellite measures the intensity of radiation and converts it to a temperature, but what temperature are we measuring? Well, because atmospheric gases don't absorb much radiation between about 10 microns and 13 microns, infrared radiation at these wavelengths mostly gets a "free pass" through the clear air. This means that for a cloudless sky, we are simply seeing the temperature of the earth's surface. To see what I mean, check out  this loop of infrared images of the Sahara Desert. Note the very dramatic changes in ground temperatures from night (light gray ground) to day (dark gray/black ground). This is because surface temperatures often dramatically change during the day over deserts, where the broiling sun bakes the earth's surface by day. At night, however, the desert floor often cools off rapidly after sunset.

Of course, sometimes clouds block the satellite's view of the surface; so what's being displayed in cloudy areas? Well, while atmospheric gases absorb very little infrared radiation at these wavelengths (and thus emit very little by Kirchhoff's Law), that's not the case for liquid water and ice, which emit very efficiently at these wavelengths. Therefore, any clouds that are in the view of the satellite will be emitting infrared radiation consistent with their temperatures. Furthermore, infrared emitted by the earth's surface is completely absorbed by the clouds above it. Remember that since clouds emit infrared radiation effectively at this wavelength, they also absorb radiation very effectively. So even though there is plenty of infrared radiation coming from below the cloud and even from within the cloud itself, the only radiation that reaches the satellite is from the cloud top. Therefore, infrared imagery is the display of either cloud-top temperatures or Earth's surface temperature (if no clouds are present). 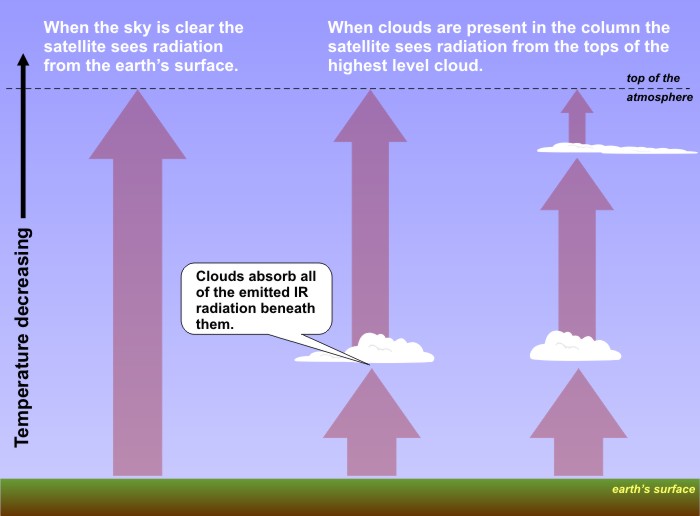 So, infrared imagery tells us the temperature of the cloud tops, but how is that useful? Well, remember that temperature typically decreases with increasing height in the troposphere, and if we make that assumption, then we can equate cloud-top temperatures to cloud-top heights. In other words, clouds with cold tops are at high altitudes (for example: cirrus, cumulonimbus). Clouds (such as stratus, stratocumulus, or cumulus) with warmer tops have tops that reside at a low altitude.

Given that infrared imagery can tell us about the altitude of cloud tops, and visible imagery can tell us about the thickness of clouds, meteorologists use both types of images in tandem. Using them together makes for a powerful combination that helps to specifically identify types of clouds. Let's apply this quick summary to a real case so I can drive home this point. Check out the side-by-side visible and infrared images below, and we'll use both types of images to diagnose the cloud type at each labeled point. Note that even though no temperature scale is shown on the infrared image, brighter shades of gray and white correspond to lower temperatures (as is typically the case).

Visible (left) and infrared (right) satellite images of a classic comma-shaped pattern of clouds associated with a strong low-pressure system centered over Ohio at 18Z on April 30, 1996. Note that while no temperature scale is shown for the infrared image, brighter shades indicate lower temperatures.
Credit: NOAA

The lesson learned here is that you can use both visible and infrared imagery to identify cloud types during the daytime. For another example of how forecasters interpret infrared and visible imagery in tandem to maximize their usefulness, check out this short video (4:53) below:

At night, routine visible imagery is not feasible, so weather forecasters must rely almost exclusively on infrared imagery. Still, infrared imagery has some limitations. Detecting nighttime low clouds and fog can be difficult because the radiating temperatures of the tops of low clouds and fog are often nearly the same as nearby ground where stratus clouds haven't formed, for example. Thanks to newer satellite technology (with more available channels), however, meteorologists can often get around this problem and better identify low clouds and fog at night.

Of course, another limitation of infrared imagery is that we have to make a major assumption (that temperatures decrease with increasing height) to interpret it. While that assumption is usually true, it's not always true. Remember that on calm, clear nights, nocturnal inversions can form (temperatures increase with increasing height in a layer of air near the ground). Therefore, at night or early in the morning, the ground in cloud-free areas can sometimes actually be colder than the tops of nearby low clouds. For example, check out this infrared image collected at 1131Z on February 25, 2008. Focus your attention on the slightly darker patch over south central Texas that I've circled. Is this region covered by clouds, or is it clear?

It's tempting to think that the darker patch is warmer and thus must be the bare ground. But, check out the station model observations. The stations in the dark region show overcast skies or sky obscured by fog. In fact, the colder areas surrounding the circle have clear skies and the warmer region within the circle is covered by low clouds and fog! The time of the image is 1131Z, which is right before sunrise, and a nocturnal inversion developed in the clear areas as the ground became very cold. The top of the low clouds and fog was higher and warmer than the ground, which is why the region of fog and low clouds appeared darker than its surroundings. The bottom line here is that you must remember that you're looking at temperature when you're looking at an infrared image. In situations where our assumption about temperatures decreasing with increasing height isn't true, your eyes might play tricks on you (brighter areas might not actually be clouds after all).

If you're interested in looking at current infrared satellite images, NOAA's GOES satellite server, the National Center for Atmospheric Research (NCAR), the College of DuPage, and Penn State all serve as good sources. Up next, we'll briefly discuss another type of imagery from satellites -- water vapor imagery. But before you move on, review the following key points on infrared imagery.