‹ Lesson 5: Remote Sensing of the Atmosphere Observing Weather From Space ›

Standard liquid-in-glass thermometers, like these at the National Weather Service Office in San Francisco, are a classic example of instruments that take in-situ weather observations.
Credit: NOAA 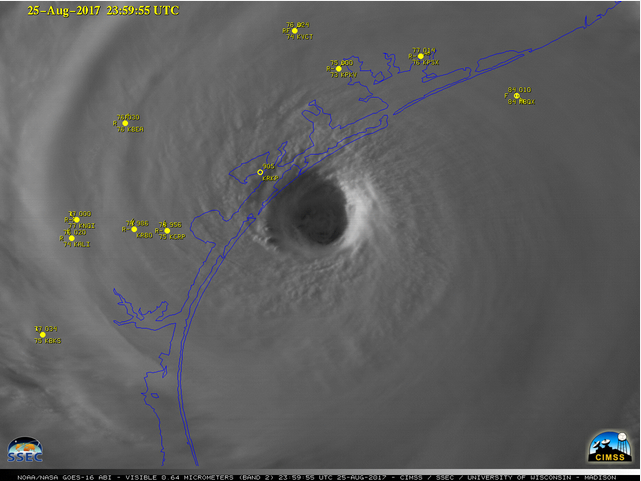 Satellite images, like this one showing Hurricane Harvey just before landfall in Texas on August 25, 2017, are the product of passive remote sensing. The little yellow dots and associated text superimposed on the image mark in-situ weather observations from weather stations in southeast Texas (and offshore).
Credit: CIMSS / University of Wisconsin

This particular satellite image was created from reflected visible light that was "seen" by a weather satellite orbiting high above the earth. Data from these satellites is transmitted back to Earth, where computers process the data and covert it into cloud pictures and other products. Also of note, the yellow dots and associated text superimposed on the satellite image above show in-situ weather observations around southeast Texas and just offshore. Obviously, there's lots of real estate not being measured by those in-situ observations! The remotely sensed satellite image, on the other hand, was able to show meteorologists the position and structure of Hurricane Harvey.

Ultimately, meteorologists get a lot of data from weather satellites, and not all satellites are created equal. Up next, we'll devote some attention to learning the differences between "geostationary satellites" and "polar-orbiting satellites." As it turns out, they each have different views of Earth because their orbits are very different. Read on!