At the completion of this section, you should be able to describe and interpret what is displayed on water vapor imagery, describe what it's most commonly used for, and discuss its limitations (in other words, what it typically cannot show).

Our look at visible and infrared imagery has hopefully shown you that using a variety of wavelengths in remote sensing is helpful because this approach gives us a more complete picture of the state of the atmosphere. Meteorologists can use visible and infrared imagery to look at the structure and movement of clouds because these types of images are created using wavelengths at which the atmosphere absorbs very little radiation (so radiation reflected or emitted from clouds passes through the clear air to the satellite without much absorption). Now, what if we took the opposite approach? What if we looked at a portion of the infrared spectrum where atmospheric gases (namely water vapor) absorbed nearly all of the terrestrial radiation? What might we learn about the atmosphere? Water vapor imagery addresses that question.

In case you didn't catch it in the paragraph above, let me be clear: Water vapor imagery is another form of infrared imagery, but instead of using wavelengths that pass through the atmosphere with little absorption (like traditional infrared imagery), water vapor imagery makes use of slightly shorter wavelengths between about 6 and 7 microns. As you can tell from our familiar atmospheric absorption chart, these wavelengths are mostly absorbed by the atmosphere, and by water vapor in particular. Therefore, water vapor strongly emits at these wavelengths as well (according to Kirchoff's Law). Thus, even though water vapor is an invisible gas at visible wavelengths (our eyes can't see it) and at longer infrared wavelengths, the fact that it emits so readily between roughly 6 and 7 microns means the radiometer aboard the satellite can "see" it.

This fact makes the interpretation of water vapor imagery different than traditional infrared imagery (which is mainly used to identify and track clouds). Unlike clouds, water vapor is everywhere. Therefore, you will very rarely see the surface of the earth in a water vapor image (except perhaps during a very dry, very cold Arctic outbreak). Secondly, water vapor doesn't often have a hard upper boundary (like cloud tops). Water vapor is most highly concentrated in the lower atmosphere (due to gravity and proximity to source regions like large bodies of water), but then the concentration tapers off at higher altitudes. 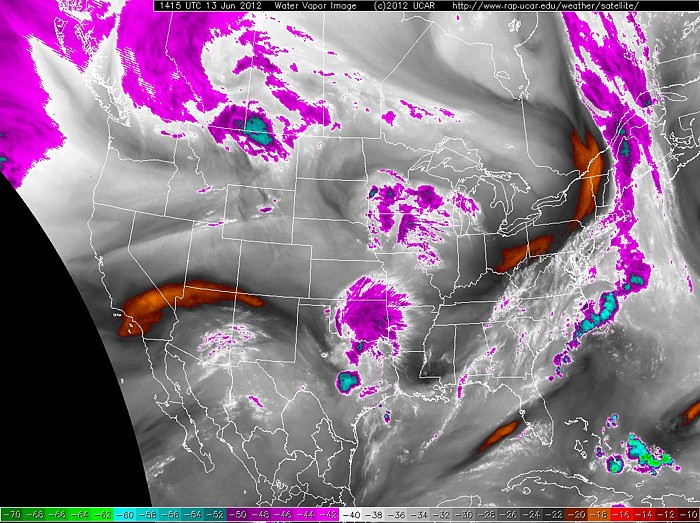 For a location over Denver, Colorado, which shows a temperature of - 30 degrees Celsius, the height of the effective layer was nearly 30,000 feet (9.1 km) on this date, and we can conclude that the upper troposphere contains more water vapor here than over southern California. Finally, turn your attention to the region of -60 degrees Celsius over central Texas (light blue). Here, the effective layer was way up at 40,000 feet (12.2 km) on this date. Such a cold, high effective layer can only be caused by high ice clouds typical of the tops of cumulonimbus clouds. I should point out that at such low temperatures very little water exists in the vapor phase. However, ice crystals also have a fairly strong emission signature between 6 and 7 microns, so if you see such cold effective layers (less than -45 degrees Celsius or so), you are most likely looking at ice clouds (cirrus, cirrostratus, cumulonimbus tops, etc.) rather than at water vapor.

An infrared image (left) at 10Z on January 14, 2003, shows a blob of low clouds (in gray) over the western Gulf of Mexico and the Texas Seaboard. The yellow dot marks Corpus Christi, Texas, which reported low clouds at the time, but there are seemingly no clouds present in the water vapor image (right). The dark shading on the water vapor image indicates that the effective layer lies in the mid-troposphere (above the low clouds). Therefore, the radiation emitted by liquid water and water vapor in the tops of the low clouds was absorbed by water vapor higher up and never reached the satellite.
Credit: NOAA

I should note that newer satellite technology, which allows meteorologists to look at water vapor imagery created from multiple wavelengths allows for features below 10,000 feet to be seen more commonly than in "the old days." However, features right near the surface are still only viewable in very cold, dry air masses (when the effective layer is near the surface).

Now that we've discussed how to interpret water vapor imagery, what might we use it for? Well, because water vapor is everywhere, and it moves along with the wind, forecasters most often use water vapor imagery to visualize upper-level circulations in the absence of clouds. In other words, water vapor can act like a tracer of air movement, much like smoke from an extinguished candle. For example, consider this enhanced infrared satellite loop and focus your attention on the Southwest U.S. Since no clouds are present, we can't really tell how the air is moving over this region. Now, check out the corresponding loop of water vapor images and focus your attention on the same area. What do you see? Do you notice the ever-so-slight counter-clockwise circulation of the air off the California coast? Such upper-level circulations are important to weather forecasters (they can sometimes be triggers for inclement weather), and we were only able to identify this circulation with the aid of water vapor imagery.

To see another example of how to interpret water vapor imagery, and to see the types of insights that meteorologists can get from examining it, check out the short video (2:33) below. In the video, ignore the black arc over the Pacific Ocean toward the left. That's just the satellite filtering out some bad data.

Water vapor imagery's ability to trace upper-level winds ultimately allows forecasters to visualize upper-level winds, and computers can use water vapor imagery to approximate the entire upper-level wind field. Here's an example of such "satellite-derived winds" in the middle and upper atmosphere at 00Z on August 26, 2017 (on the far left side of the image, you can see Hurricane Harvey about to make landfall in Texas). Having such observations over the data-sparse oceans is extremely valuable to forecasters, and much of this information gets put into computer models so that they better simulate the initial state of the atmosphere, which leads to better forecasts than if we didn't have these observations.

If you're interested in looking at current water vapor images, NOAA's GOES satellite server, the National Center for Atmospheric Research (NCAR), the College of DuPage, and Penn State all serve as good sources. Now that we've covered the three most commonly used types of satellite imagery, we're going to shift gears from remotely observing the weather from space, to remotely observing the weather from right near the ground with radar. Before moving on to radar imagery, take a moment to review the key points about water vapor imagery.