When you've completed this section, you should be able to discuss the dangers associated with flash flooding, safety tips, and the general atmospheric conditions in which flash flooding occurs.

When it comes to thunderstorms, you might immediately think of lightning and thunder. Or, perhaps you think of other storm-related hazards like strong winds or even tornadoes (both of which we'll explore more later in this lesson). But, one "underrated" weather risk (in my opinion) associated with convective storms is flooding. Statistics vary from year to year, but in the 30-year period from 1987 to 2016, more deaths were attributed to flooding in the United States than all other weather hazards (other than heat-related deaths, which are not related to convection or thunderstorms). Furthermore, the 10-year average number of fatalities (from 2007-2016) was slightly higher than the 30-year average, suggesting that deaths from flooding are a problem that isn't improving (unlike lightning deaths, as you may recall).

All floods are not created equal, however. Some floods result when rivers or other bodies of water slowly rise out of their banks. These types of floods are usually well predicted at least a day or two in advance (sometimes longer) and may last for days or even weeks before water levels decline and return to their normal confines. On the other end of the spectrum is what we'll focus on in this section -- flash floods. Of course, the operative word in "flash flood" is flash because these floods typically develop suddenly (with little advance warning) over a local area. Flash floods usually come and go within a matter of hours. The flash flood in the images below, which occurred in Maricopa County, Arizona, on October 13, 2003, was at its peak at 10:30 A.M. Only two and a half hours later, the offending "wash" had all but emptied (for the record, a wash is a natural channel for run-off in an dry climate).

The operative word in "flash flooding" is flash. This flash flood occurred in Maricopa County, Arizona, on October 13, 2003. Only two and a half hours after its peak at 10:30 A.M, the offending wash had all but emptied.
Credit: NOAA

The dangers associated with flash flooding boil down to two things: First, flash floods occur with little advance notice, so people don't have much time to prepare or seek higher or drier ground. Secondly, moving water carries a lot of force! Indeed, most people underestimate the power of moving water. Just six inches of rushing water can potentially knock an adult off his or her feet. The immense force of moving water is the reason why statistics show that more than half of all flood-related deaths occur in vehicles, when people drive their cars into flood waters.

Given the prevalence of flood-related deaths in vehicles, the National Weather Service has adopted the phrase, "Turn around! Don't Drown!" to raise awareness of the dangers of driving vehicles into flood waters. Trouble begins when people assume they know how deep the water across the roadway is, and they assume that they'll be able to drive through it. But, just 12 inches of water (not even enough to cover the tires) is enough to float smaller vehicles, and 18 to 24 inches of water can float larger vehicles like SUVs and vans. If the water is moving rapidly, vehicles easily get swept away like small toys.

The fact that so little water can cause a vehicle to be swept away may surprise you. The physics of how seemingly little water can sweep away something as large as an automobile involves buoyancy, and you may find this short video (3:47) explaining the forces that water imposes on a vehicle to be fascinating. You should NEVER attempt to drive through a flooded roadway. Even if you think you're familiar with the area and that the water isn't deep, you don't know the condition of the road beneath the water. Don't be like the person in the "Turn Around! Don't Drown!" public-service announcement below!

Ultimately, the biggest step you can take to avoid becoming a victim of a flash flood is to respect the power of moving water. Do not drive through or walk into flood waters (walking in or near flood waters is the second leading cause of flood-related deaths). Take extra caution at night, when it's often not easy to see areas of standing water. Of course, staying in tune with the latest weather forecasts can go a long way in preparing you for the possibility of flash flooding, even though a flash flood itself may come on suddenly. Now let's examine the atmospheric conditions that can lead to flash floods.

The Meteorology of Flash Floods

Predicting flash floods comes with two main challenges: Not only must forecasters recognize patterns favorable for heavy rain, they must also weigh "hydrological factors," which are characteristics that relate to the "behavior" of precipitation (and existing water) at or below the Earth's surface. Indeed, the potential of a given rainfall to produce flash flooding depends on preceding precipitation (recent heavy rains may have already saturated the ground, for example), the size and topography of the drainage basin, and the degree of urbanization within the basin (which can lead to faster runoff). There can be other extenuating circumstances, of course, ranging from catastrophic dam failures to ice jams on rivers to autumn leaves clogging urban drains.

Meteorology and hydrology conspired to create one of the worst flash floods in U.S. history -- the Big Thompson Canyon Flood in Colorado during the early evening of July 31, 1976. In a matter of a few hours, flash flooding killed 145 people and destroyed 418 houses and 152 businesses. The estimated cost of the damage was more than $40 million. 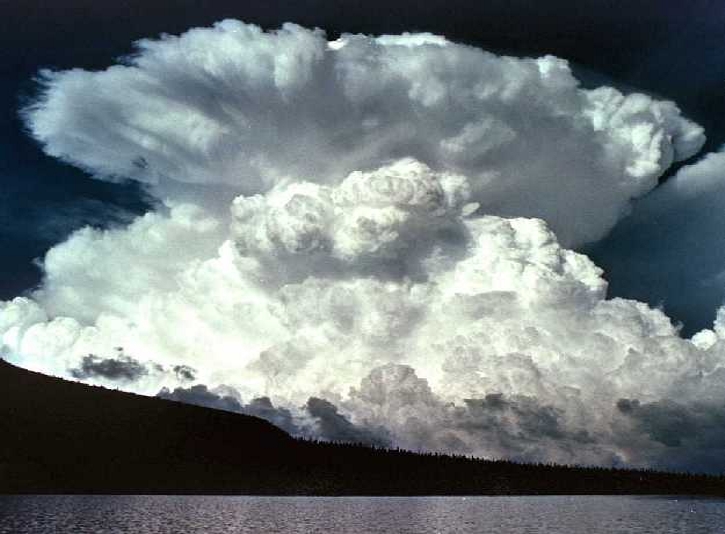 A line of nearly stationary thunderstorms erupted over the eastern foothills of the Rockies on July 31, 1976. Here, you can see the roiling turrets of convection in one of the storms. Note the anvil of another storm on the right of the photograph.
Credit: NOAA

The tragedy unfolded as a line of strong thunderstorms (see photograph on the right) erupted over the foothills of the Colorado Rockies. The storms remained nearly stationary for three to four hours, inundating an area of 70 square miles in the central portion of the Big Thompson River drainage basin with as much as a foot of rain. A foot of rain in just a few hours would cause flash flooding practically anywhere, but persistent downpours in the Big Thompson Canyon were simply a recipe for unmitigated disaster. Sheer rock, which juts upward at very steep angles, forms the walls of the canyon. Obviously, there's not much soil and vegetation to absorb some of the runoff.

Forecasters also look for high dew points because they suggest high amounts of water vapor in the lower troposphere. Of course, moisture near the surface isn't the only important factor, so forecasters also use other metrics to assess moisture through the depth of the troposphere to gauge just how "juicy" an air mass is compared to average for a given location and date. When the amount of moisture in an air column is much higher than average, the risk of flash flooding increases.

Finally, forecasters look for a stationary (or nearly stationary) mechanism to promote rising air. This could be anything from a slow-moving front (a source of lifting) to a mountain range. In particular, forecasters are on the look out for situations in which a narrow ribbon of fast, low-level winds (often called a "low-level jet stream" or "low-level jet") interacts with a slow-moving front or is forced to rise up elevated terrain (orographic lifting). Such low-level jet streams can continue to supply moist air for hours at a time, and when that moist air is forced to rise over a front or up a mountain slope, the stage can be set for prolonged heavy rain.

While forecasters can often identify weather patterns that may favor flash flooding in a particular region a few days in advance, pinpointing the details of exactly when and where the flooding might occur is difficult more than perhaps a few hours ahead of time. So, stay alert when the possibility of heavy rain is in the forecast!

Up next, we'll start looking at other damaging aspects of thunderstorms, and we'll begin with hail. Read on!