‹ More on Supercells and Tornadoes Other Whirlwinds ›

Once upon a time, tornadoes almost seemed somewhat mysterious. Photographs or videos of tornadoes were a rare commodity because few people had cameras (or video cameras) handy when a tornado was nearby. But, in the era of cellphone pictures and videos, tornado pictures and videos are a dime a dozen! If you search for tornado videos on YouTube, you'll find tons (many with "colorful" language)! Some footage by professional storm chasing teams is really jaw-dropping, and shows the raw, destructive power of tornadoes. If you see enough pictures (or videos) of tornadoes, it becomes clear that they come in all shapes and sizes (from less than 100 feet wide to more than two miles wide). So, not surprisingly, the damage done by tornadoes can vary widely.

Meteorologists can't yet reliably estimate the intensity of a tornado in real-time (although some methods are being developed using advances in radar technology), and we have no way of making precise wind speed measurements of most tornadoes. Therefore, meteorologists assess the strength of a tornado based on an visual assessment of the damage it leaves in its aftermath. This effort was pioneered by Dr. Ted Fujita in the 1970s, and the "Fujita Scale" (F-Scale) became the standard for rating tornado intensity based on damage. Further studies by meteorologists and engineers, however, refined the relationships between wind speeds and specific types of damage, so the scale was revised and updated in 2007. The updated scale, called the Enhanced Fujita Scale (EF-Scale) rates tornadoes from EF-0 (weakest) to EF-5 (strongest) based on 28 damage indicators that represent various types of structures or objects that could be damaged by a tornado. The final rating is based on the most severe damage that occurs at any point along the tornado's path.

The EF-Scale is listed in the table below, along with the estimated wind speeds for each rating level and a description of the damage. Keep in mind that these wind speeds are estimates based on damage (not actual wind-speed measurements taken during the tornado). On the low end of the scale, an EF-0 tornado typically causes minor damage (loss of roof shingles, perhaps downed branches or small trees, etc.). Higher ratings become increasingly more damaging, and at the top end of the scale, EF-5 tornadoes cause incredible damage. Well-built homes can be completely removed from their foundations and swept away, and larger buildings (schools, shopping malls, etc.) sustain critical damage. Automobiles can be lifted off the ground and thrown hundreds or thousands of feet. If you click on each damage description in the table, you'll see a sample photograph to give you an idea of the type of damage associated with each EF rating (credit for all photos: National Weather Service).

Most tornadoes in the United States (somewhere around 80 percent) are considered weak (EF-0 or EF-1), and about 95 percent of all tornadoes are EF-2 or lower on the scale. A little less than one percent of all tornadoes are considered violent (EF-4 or EF-5). From 1950 through 2013, just 59 F5 / EF-5 tornadoes occurred in the United States (their locations are plotted on this map -- note that they're all in the Plains, Midwest, and Southeast U.S.), which is about one per year, on average. So, violent tornadoes (EF-4 and especially EF-5) are relatively rare, but they are responsible for nearly two-thirds of all tornado-related fatalities. 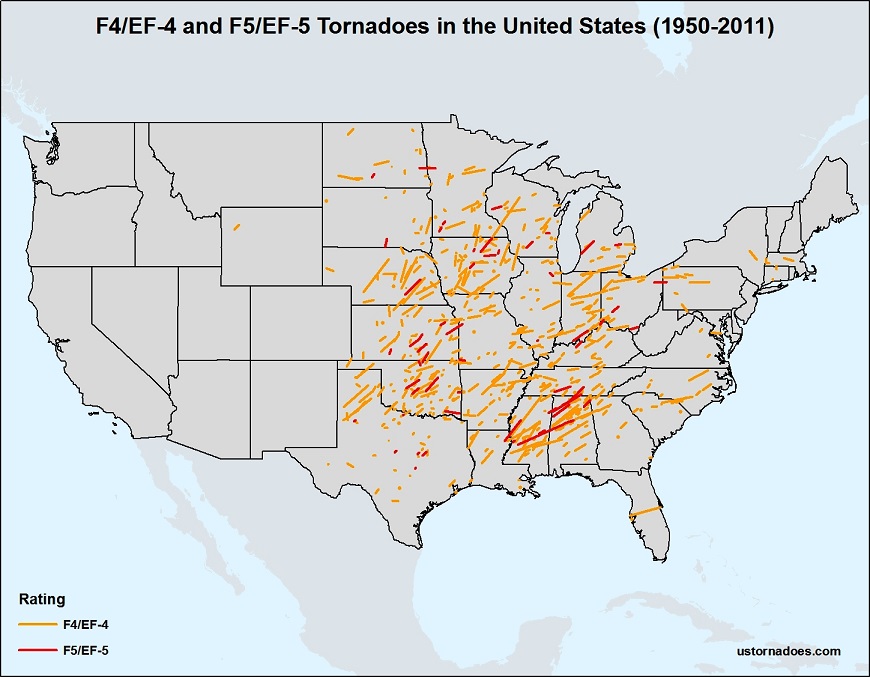 What can you do to keep yourself safe if a tornado approaches? The first step is to have a reliable source of tornado watches and tornado warnings, and make sure to take immediate action if a tornado warning is issued for your area. What actions should you take if a tornado is imminent? I've included some key safety tips below (for more information, I encourage you to check out The National Weather Service tornado safety site):

Despite the ferocity of tornadoes, the United States has fewer than 100 tornado-related deaths per year, on average, thanks in part to improved detection and warning in the Doppler radar era. But, the number of tornado-related deaths fluctuates wildly from year-to-year, as this graph of tornado fatalities in the U.S. from 1940 through 2011 shows. Several years have huge spikes in the death toll (more than triple the average) because of particularly vicious tornado outbreaks (like the "Super Outbreak" of 1974 and the "Super Outbreak" of 2011, for example).The unfortunate reality is that, if you're in a building with no basement, and you're forced to remain above ground when an EF-4 or EF-5 tornado srikes, you're at substantial risk of severe injury or death even with accurate and timely tornado warnings. So, outbreaks that involve violent tornadoes still usually come with fatalities simply because not everyone can get underground. 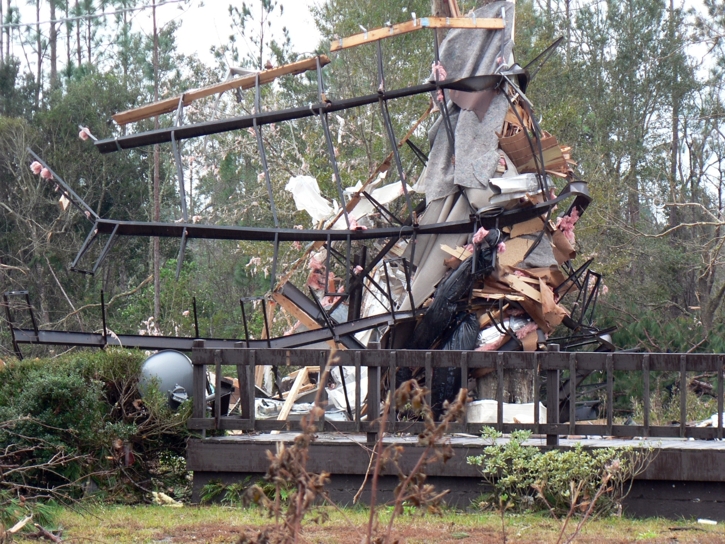 An EF-3 tornado in northeastern Florida on February 20, 2007 wrapped the frame of a mobile home around a tree. Mobile homes are not safe places in tornadoes.
Credit: National Weather Service

We've learned a lot about how tornadoes work in the last few decades (although there's still more to learn). Still, several myths about tornadoes are still common, and most of them stem from an earlier era when tornadoes were more mysterious. Let's break down three myths that still linger:

Myth 1: If a tornado approaches your house, you should quickly open the windows to equalize the pressure between inside your house and outside to prevent the house from exploding.

This myth stems from the idea that pressure decreases dramatically outside a house as a tornado approaches, and that the large pressure-gradient force between the outside and inside of a house could cause it to explode. The idea that pressure decreases outside of a house as a tornado approaches is certainly true, but a massive pressure-gradient force that causes houses to explode never occurs because houses aren't perfectly sealed. They have vents and lots of crevices that allow air to flow in and out of the structure, so a giant pressure gradient never has a chance to develop. The destruction of a house is due entirely to the extreme forces associated with tornadic winds. This security camera footage shows a house being destroyed by an EF-5 tornado in Parkersburg, Iowa in 2008. Winds literally rip the house apart piece by piece. It does not explode.

This myth is particularly dangerous because you certainly don't want to rush around opening windows if a tornado is approaching. Doing so only wastes time that could be spend seeking shelter in a basement or interior room and increases your risk of being hit by flying debris or glass. Stay away from windows!

Myth 2: Tornadoes can skip over one house and completely destroy the next.

As a tornado moves along, a suction vortex rotating around the tornado can leave a cycloid damage path, which is evident in this aerial photograph taken in Oklahoma from a tornado on May 3, 1999. Full-size image.
Credit: National Weather Service

It's true that damage in a tornado's path can be somewhat irregular, so this myth can appear to be true. But, it's not because a tornado skips or hops over one house only to demolish the next. This myth stems from the fact that some tornadoes actually have tiny "suction vortices" that rotate around the main tornado. Such tornadoes are called "multi-vortex" tornadoes and the suction vortices can cause damage in a cycloid pattern (check out the photo on the right) as the tornado moves along. Damage from suction vortices can be tremendous, and given their looping path, it's easy to see how one house might get missed by a tornado, while another takes a direct hit.

It's true that tornadoes are less common in mountainous areas, in large part because mountains and hills can sometimes disrupt favorable air flow into thunderstorms. But, tornadoes can certainly happen in mountainous areas and can travel up and down mountains. In fact, the strongest and longest-tracked tornadoes in Pennsylvania history tracked for miles across the mountainous northwest and north-central parts of the state on May 31, 1985, for example.

You've already seen that tornadoes can strike big cities (remember the tornado that did damage to the Georgia Dome in Atlanta during a basketball game). Another famous example of a tornado striking a big city occurred on August 11, 1999, when a tornado struck Salt Lake City, Utah (Salt Lake City is also surrounded by mountains, which obviously did nothing to "protect" the city). Other cities that have been hit by tornadoes in the past few decades include Miami, Nashville, and Oklahoma City (just to name a few). Tornadoes hitting cities might seem rare (which is why some people think that cities are immune), but that's only because in the scheme of the entire United States, the area covered by cities is tiny, so a tornado finding a major city is somewhat like finding a needle in a haystack. But, it does happen!

Our entire discussion about tornadoes, so far, has focused on tornadoes spawned by supercells. But, sometimes tornadoes and other whirlwinds form without supercells in the picture. We'll explore those next!

‹ More on Supercells and Tornadoes Other Whirlwinds ›
METEO 3 Introductory Meteorology