As suggested earlier, scanning the Earth's surface from space is like scanning a paper document with a desktop scanner, only a lot more complicated. Raw remotely sensed image data are full of geometric and radiometric flaws caused by the curved shape of the Earth, the imperfectly transparent atmosphere, daily and seasonal variations in the amount of solar radiation received at the surface, and imperfections in scanning instruments, among other things. Understandably, most users of remotely sensed image data are not satisfied with the raw data transmitted from satellites to ground stations. Most prefer preprocessed data from which these flaws have been removed.

You read in Chapter 6 that scale varies in unrectified aerial imagery due to the relief displacement caused by variations in terrain elevation. Relief displacement is one source of geometric distortion in digital image data, although it is less of a factor in satellite remote sensing than it is in aerial imaging because satellites fly at much higher altitudes than airplanes. Another source of geometric distortions is the Earth itself, whose curvature and eastward spinning motion are more evident from space than at lower altitudes.

The Earth rotates on its axis from west to east. At the same time, remote sensing satellites orbit the Earth from pole to pole. If you were to plot on a cylindrical projection the flight path that a polar-orbiting satellite traces over a 24-hour period, you would see a series of S-shaped waves. As a remote sensing satellite follows its orbital path over the spinning globe, each scan row begins at a position slightly west of the row that preceded it. In the raw scanned data, however, the first pixel in each row appears to be aligned with the other initial pixels. To properly georeference the pixels in a remotely sensed image, pixels must be shifted slightly to the west in each successive row. This is why processed scenes are shaped like skewed parallelograms when plotted in geographic or plane projections, as shown in the image below. 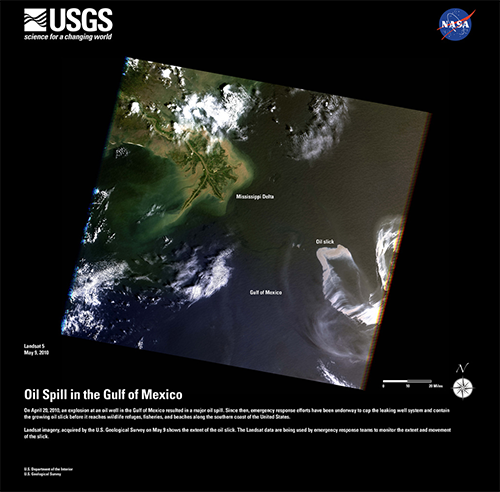 Georeferenced Landsat 5 scene showing Deepwater Horizon oil spill in the Gulf of Mexico, May 9, 2010. Notice that the georeferenced scene is shaped like a skewed parallelogram. On April
Credit: USGS & NASA

In addition to the systematic error caused by the Earth's rotation, random geometric distortions result from relief displacement, variations in the satellite altitude and attitude, instrument misbehaviors, and other anomalies. Random geometric errors may be corrected through a process known as rubber sheeting. As the name implies, rubber sheeting involves stretching and warping an image to georegister control points shown in the image to known control point locations on the ground. First, a pair of plane coordinate transformation equations is derived by analyzing the differences between control point locations in the image and on the ground. The equations enable image analysts to generate a rectified raster grid. Next, reflectance values in the original scanned grid are assigned to the cells in the rectified grid. Since the cells in the rectified grid don't align perfectly with the cells in the original grid, reflectance values in the rectified grid cells have to be interpolated from values in the original grid. This process is called resampling. Resampling is also used to increase or decrease the spatial resolution of an image so that its pixels can be georegistered with those of another image.

The reflectance at a given wavelength of an object measured by a remote sensing instrument varies in response to several factors, including the illumination of the object, its reflectivity, and the transmissivity of the atmosphere. Furthermore, the response of a given sensor may degrade over time. With these factors in mind, it should not be surprising that an object scanned at different times of the day or year will exhibit different radiometric characteristics. Such differences can be advantageous at times, but they can also pose problems for image analysts who want to mosaic adjoining images together or to detect meaningful changes in land use and land cover over time. To cope with such problems, analysts have developed numerous radiometric correction techniques, including Earth-sun distance corrections, sun elevation corrections, and corrections for atmospheric haze.

To compensate for the different amounts of illumination of scenes captured at different times of day, or at different latitudes or seasons, image analysts may divide values measured in one band by values in another band, or they may apply mathematical functions that normalize reflectance values. Such functions are determined by the distance between the Earth and the sun and the altitude of the sun above the horizon at a given location, time of day, and time of year. Analysts depend on metadata that include the location, date, and time at which a particular scene was captured.

Image analysts may also correct for the contrast-diminishing effects of atmospheric haze. Haze compensation resembles the differential correction technique used to improve the accuracy of GPS data in the sense that it involves measuring error (or, in this case, spurious reflectance) at a known location, then subtracting that error from another measurement. Analysts begin by measuring the reflectance of an object known to exhibit near-zero reflectance under non-hazy conditions, such as deep, clear water in the near-infrared band. Any reflectance values in those pixels can be attributed to the path radiance of atmospheric haze. Assuming that atmospheric conditions are uniform throughout the scene, the haze factor may be subtracted from all pixel reflectance values. Some new sensors allow "self calibration" by measuring atmospheric water and dust content directly.

The data sheets you viewed during your site visit to DigitalGlobe.com outlined different radiometric and geometric corrections applied to Basic and Standard imagery,