Christopher Lavers published an informative short history of the "Origins of High Resolution Civilian Satellite Imaging" in Directions Magazine in 2013. He points out that remote sensing from space began in the 1960s as a surveillance technology, in the wake of the Soviet Union's disruptive launch of Sputnik I in 1958.

In 1959, the U.S. launched its first Corona satellite (then called Discoverer 4), one in a series of launches that performed secret photographic reconnaissance until 1972 from an altitude of about 160 km. Photographic film exposed in space was returned to Earth in reentry capsules that were subsequently retrieved by aircraft and returned to the U.S. for processing and analysis. Not declassified until 1992, the panchromatic image below reveals an Israeli nuclear reactor. 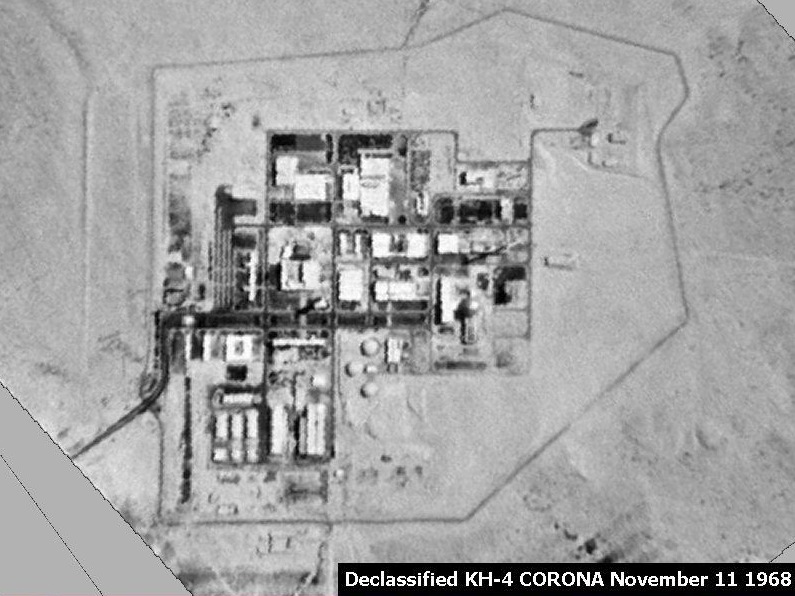 High-resolution panchromatic image data first became available to civilians in 1994, when the Russian space agency SOVINFORMSPUTNIK began selling surveillance photos to raise cash in the aftermath of the breakup of the Soviet Union. The photos were taken with a camera system called KVR 1000 which was mounted in unmanned space capsules like the Corona satellites. After orbiting Earth at altitudes of 220 km for about 40 days, the capsules separate from the Cosmos rockets that propelled them into space, and spiral slowly back to Earth. After the capsules parachute to the surface, ground personnel retrieve the cameras and transport them to Moscow, where the film is developed. Photographs were then shipped to the U.S., where they were scanned and processed by Kodak Corporation. The final product was two-meter resolution, georeferenced, and orthorectified digital data called SPIN-2.

Also in 1994, a new company called Space Imaging, Inc. was chartered in the U.S. Recognizing that high-resolution images were then available commercially from competing foreign sources, the U.S. government authorized private firms under its jurisdiction to produce and market remotely sensed data at spatial resolutions as high as one meter. By 1999, after a failed first attempt, Space Imaging successfully launched its Ikonos I satellite into an orbital path that circles the Earth 640 km above the surface, from pole to pole, crossing the equator at the same time of day, every day. Such an orbit is called a sun synchronous polar orbit, in contrast with the geosynchronous orbits of communications and some weather satellites that remain over the same point on the Earth's surface at all times.

Ikonos' panchromatic sensor records reflectances in the visible band at a spatial resolution of one meter, and a bit depth of eleven bits per pixel. The expanded bit depth enables the sensor to record reflectances more precisely, and allows technicians to filter out atmospheric haze more effectively than is possible with 8-bit imagery.

The U.S. Air Force initiated its Defense Meteorology Satellite Program (DMSP) in the mid-1960s. By 2001, they had launched fifteen DMSP satellites. The satellites follow polar orbits at altitudes of about 830 km, circling the Earth every 101 minutes.

The program's original goal was to provide imagery that would aid high-altitude navigation by Air Force pilots. DMSP satellites carry several sensors, one of which is sensitive to a band of wavelengths encompassing the visible and near-infrared wavelengths (0.40-1.10 µm). The spatial resolution of this panchromatic sensor is low (2.7 km), but its radiometric resolution is high enough to record moonlight reflected from cloud tops at night. During cloudless new moons, the sensor is able to detect lights emitted by cities and towns. Image analysts have successfully correlated patterns of night lights with population density estimates produced by the U.S. Census Bureau, enabling analysts to use DMSP imagery (in combination with other data layers, such as transportation networks) to monitor changes in global population distribution.

Figure 8.11.3 Composite image of the Earth at night showing lights from cities and towns throughout the world. This image was recorded by DMSP satellite sensors.
Credit: Geophysical Data Center, 2005
‹ 9. Aerial Imaging up 11. Multispectral Imaging from Space ›
The Nature of Geographic Information