When defensive football coaches study game films of an upcoming opponent, they look for tendencies in the formations and plays used by the opposing team’s offense. By recognizing such patterns, defensive coaches can design strategies to predict the play the opposition will run on any given down.

In similar fashion, weather forecasters look for patterns on weather maps in order to predict the tendencies of potentially offensive weather. Such pattern recognition can play an instrumental role in short-term forecasts (one to three days ahead), medium-range forecasts (four to ten days) or long-range outlooks (several weeks to months to seasons). 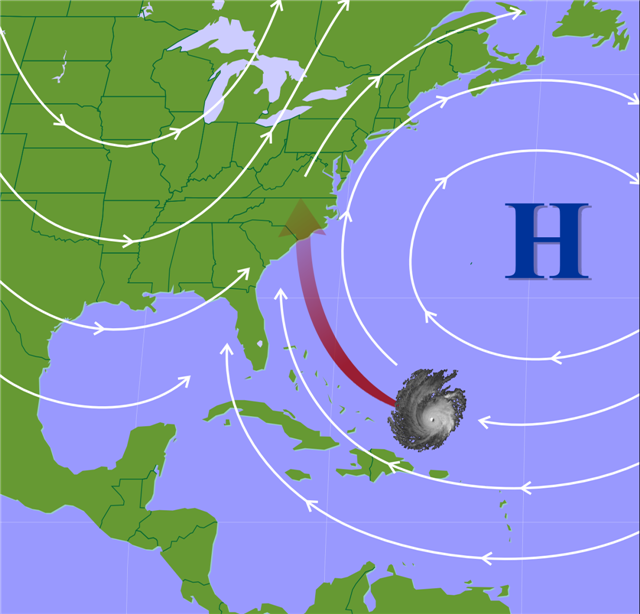 This pattern of steering winds around the Bermuda high and a trough over the Midwest favors a tropical cyclone moving northward up the Atlantic Coast.

For an example of pattern recognition, suppose it’s mid-September, the heart of Atlantic hurricane season. If upper-level winds resembled the pattern shown in the figure above, forecasters at the Tropical Prediction Center in Coral Gables, FL would watch for the possibility of a tropical system running a northward “fly pattern” up the East Coast. Indeed, with a lethargic trough of low pressure drifting over the Midwest and the Bermuda high lined up in its typical formation, the mean wind in the steering layer (determined by the tropical system's central low pressure) would tend to direct any tropical system over the Caribbean or the tropical Atlantic right up the Eastern Seaboard (like football pass patterns, the directions of the mean winds in the steering layer are marked by arrows in the figure).

Hurricane Irene (August, 2011) took such a track, courtesy of the Bermuda high.  On the evening of August 24, 2011, as Hurricane Irene's central pressure gradually decreased toward 950 mb, the mean wind in the steering layer from 850 mb to 300 mb associated with the clockwise circulation around the Bermuda high steered the hurricane up the East Coast.  Check out the 00 UTC analysis of the mean wind direction (streamlines) in the 850-300-mb layer on August 25 and the subsequent track of Hurricane Irene.

The Bermuda high doesn't always steer hurricanes up the East Coast, of course.  Sometimes the Bermuda high will expand westward and steer tropical cyclones farther west (see image below, for an idealized example). 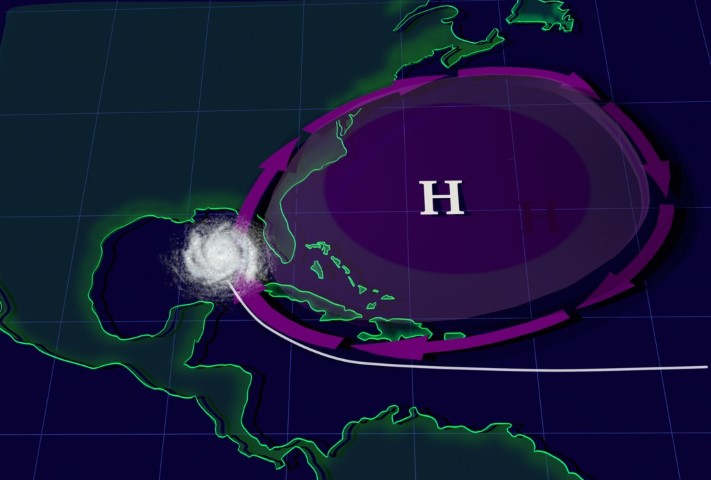 When the Burmuda high shifts westward, it sometimes steers tropical cyclones into the Gulf of Mexico.

In August and September 2004, the prevailing pattern did not invite tropical cyclones up the East Coast, but steered Hurricanes Charley, Frances, Ivan and Jeanne more westward on a collision course with Florida (check out the 500-mb pattern during the period, September 1-4, when Hurricane Frances approached the Sunshine State).

In summary, this NASA visualization shows two of the possible roles that the Bermuda high plays in steering tropical cyclones. Forecasters keep both steering patterns in mind when forecasting the tracks of tropical cyclones approaching the United States from the east.

Shifting away from the Tropics, forecasters at the Storm Prediction Center (SPC) in Norman, OK, apply the method of pattern recognition to predict outbreaks of severe thunderstorms. For example, they don’t hesitate to issue severe thunderstorm watches when they see a pattern like the one shown in the figure below. 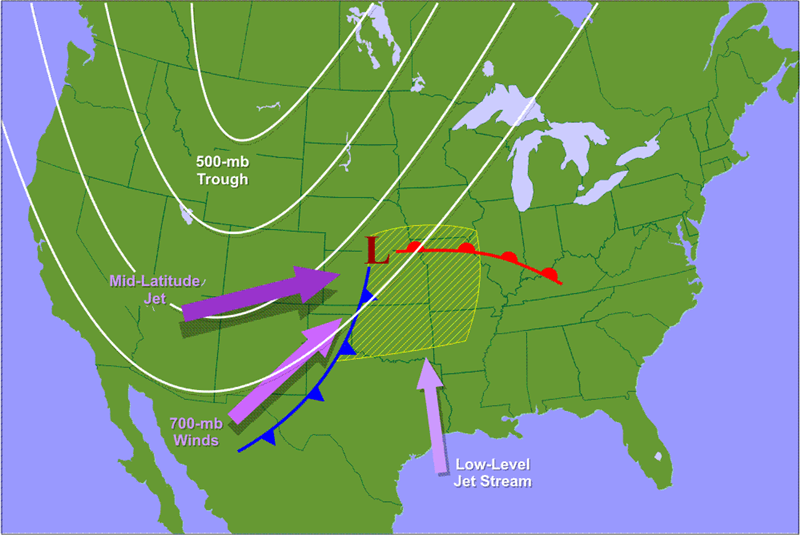 A classic set-up for an outbreak of severe weather during the spring. The hatched area represents the area at greatest risk.

When composing seasonal outlooks, meteorologists look at (among other factors) teleconnections from either El Niño or La Niña, if one of these is present or imminent in the tropical Pacific Ocean.  Recall that a teleconnection is a correlation between an atmospheric or oceanic anomaly in one part of the world and an anomaly somewhere else. Both El Niño and La Niña involve significant departures from average sea-surface temperatures. These anomalies incite anomalous exchanges of heat, moisture, and momentum between the ocean and the overlying atmosphere that can have far-reaching effects on seasonal weather patterns in other parts of the globe.

There are many other examples of pattern recognition that meteorologists use to make short-term, medium-range, and long-range forecasts. But pattern recognition will only take forecasters so far. In this world of fast-paced technology, computer simulations play an integral role in any weather forecaster's game plan. So, just as some football coaching staffs rely on computers to quantify the tendencies of opposing teams, forecasters look at computer simulations of the atmosphere to help them mold a forecasting strategy within the context of the prevailing weather pattern.