‹ 4a. Forecasting Strategies 5a. Looking for an Edge in the Medium Range ›

Medium-Range Forecasting: Sticks in a Stream

If you throw a stick into a stream, you might be able to visually follow the stick for a short while, but eventually the stream carries it out of sight. By knowing the locations of fast white waters and slower currents farther downstream, you might be able to make an extended forecast of the stick’s position a few minutes later, but it still would be impossible to predict exactly. A detailed forecast of the stick’s location several hours into the future seems like a mission impossible.

Such are the drawbacks of numerical weather prediction and weather forecasting in general – the farther you attempt to forecast into the future, the more difficult it is to predict details about an atmospheric "stick" (a metaphor for weather systems such as a mid-latitude low) embedded within the fast currents of the jet stream. Medium-range forecasts in fast-flow patterns during the cold season are particularly prone to error. These forecasting limitations are especially true in medium-range forecasting (the medium range generally represents three to seven days in the future). 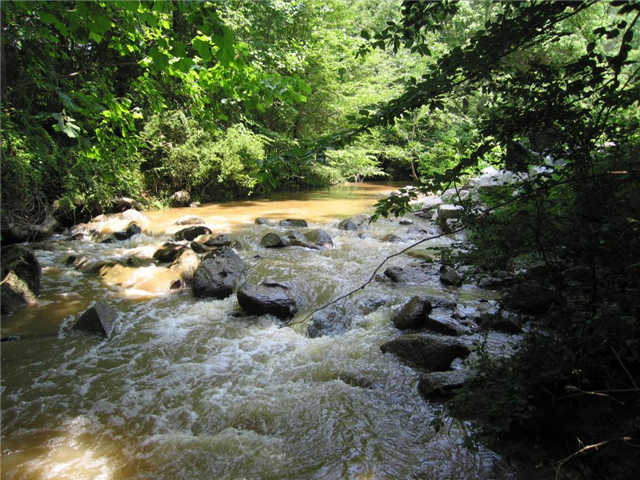 Forecasting specific weather conditions five to seven days in advance can be tantamount to throwing a stick into a brimming stream and predicting its exact downstream position several hours later.
Courtesy of Watershed Education for Communities and Officials, North Carolina State University

With this idea in mind, we would like to comment about the five-, ten-, and fifteen-day (and even longer) forecasts that are routinely reported in the news media and offered on the Web. Typically, these extended forecasts give specific high and low temperatures for each day. They also include icons that specifically describe sky conditions and precipitation. We are even aware of instances in which television meteorologists, eager to beat their competition to the punch, boldly predicted snow accumulations for a storm slated by a medium-range model to occur four or five days in the future. Such specificity more than a few days in advance is difficult to justify in most cases, given that errors in computer models magnify in time, just like the distortion of whispered information grows as the line of people gets longer. Though there have been occasions in which medium-range models pegged big storms more than a few days in advance (the March 1993 Superstorm is a good example), such specificity in medium-range forecasting invariably hurts the credibility of operational meteorology.

The American Meteorological Society has some sage advice for anyone who routinely accesses deterministic forecasts more than eight days into the future: "Presently, forecasts of daily or specific weather conditions do not exhibit useful skill beyond eight days, meaning that their accuracy is low" (AMS official statement on Weather Analysis and Forecasting).

One tried-and-true piece of advice that’s useful for medium-range forecasting (any forecasting, for that matter) is: “Emphasize what you know, not what you don’t know.” For example, instead of specific numbers for high and low temperatures and precipitation, some forecasters employ descriptions such as “below average,” “above average,” “a wet pattern,” “a dry period,” and other conservative but useful outlooks. Or, rather than ascribing specific predictions for a particular location, some forecasters expand the spatial and time horizons of their medium-range forecasts. For example, instead of predicting a snowstorm for a certain town or region in Pennsylvania for a Saturday in the extended forecast prepared on the prior Monday, forecasters might say “an important storm will affect the Northeast States over the weekend.” Such an approach informs, but does not raise the red flag of imminent storminess.

Many forecasters will make such statements about medium-range forecasts only when there’s agreement between several models and some run-to-run consistency in each model. In addition to the GFS, another medium-range model that forecasters commonly consult is referred to as the "European." This global model is produced at the European Centre for Medium-Range Weather Forecasts (thus the name), and, in the long run, has proven to be slightly more skillful than the GFS.

So how do meteorologists use guidance from these two models (and others) to approach the challenge of medium-range forecasting?

‹ 4a. Forecasting Strategies 5a. Looking for an Edge in the Medium Range ›
A World of Weather: Fundamentals of Meteorology