Other Teleconnections: It's More than El Niño

The links between El Niño and La Niña and climate anomalies in other parts of the globe are indisputable, especially during strong events when the temperature anomaly in the tropical Pacific is relatively large. In the words of one senior meteorologist at NOAA, "The El Niño/La Niña events are no-brainers. Their forcing on extreme weather events is well-known. The real challenge is linking the "neutral" years [years with neither an El Niño nor a La Niña] with characteristic jet stream patterns."

El Niño and La Niña are not the only teleconnections that long-range forecasters consider. Another cycle now coming under closer scrutiny is the North Atlantic Oscillation, or NAO. It's not a cycle in water temperature, but rather a relatively persistent pattern of air pressure at high altitudes. Though it hasn't received the publicity that El Niño and La Niña have, the NAO explains, to a large degree, the variability of winter weather over the eastern United States. 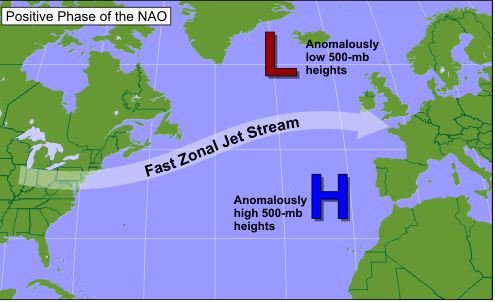 Forecasters track the NAO by comparing the 500-mb heights over the far North Atlantic (typically near Iceland) with those several thousand miles to the south near the Azores Islands. Sometimes, heights over the far North Atlantic are anomalously low, while those near the Azores are abnormally high. This large gradient results in a persistent pattern of fast upper-air westerly winds blowing across the North Atlantic (see schematic above). This configuration is known as the positive phase of the NAO. The fast westerly flow means that cold air masses invading the eastern United States move quickly out to sea. So do low-pressure systems that form along the East Coast (these lows also tend to be weaker in such a fast, zonal regime). As a result, the positive phase of the NAO typically translates to milder winters in the eastern U.S. with fewer, weaker storms and, in turn, less snow.

At other times, the north-to-south 500-mb height gradient over the North Atlantic can be unusually weak, often occurring when a pronounced 500-mb ridge (or a closed 500-mb high) stalls over the region (usually near Greenland or Iceland), blocking and diverting the normal west-to-east progression of low-pressure systems from North America. This pattern of unusually high heights over the North Atlantic constitutes the negative phase of the NAO (see schematic below). In this configuration, cold air masses aren't as quick to move off the North American continent. Plus, the highly meridional 500-mb pattern associated with the negative phase favors more frequent and more powerful low-pressure systems along the Eastern Seaboard. Needless to say, this stormy pattern increases the odds for snow. The NAO was strongly in its negative phase during the winter of 1995-96, which turned out to be the snowiest on record in many eastern cities, including Philadelphia, New York City, and Boston. 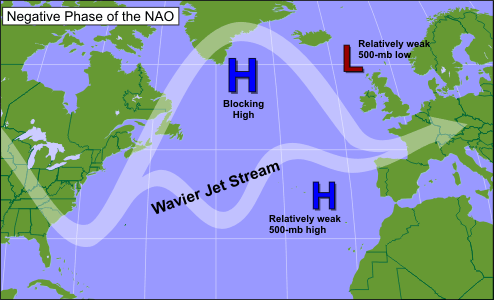 The negative phase of the North Atlantic Oscillation is marked by unusually high 500-mb heights near Iceland, a pattern that typically develops with a blocking ridge or blocking high.

Like El Niño and La Niña, accurate forecasts of the NAO can pave the way for much more accurate longer-range forecasts. At present, however, the NAO is much less predictable than El Niño and La Niña. That's because the NAO switches from one phase to another more frequently (sometimes from week to week). The reasons for this variability are still poorly understood.

There are plenty of other teleconnections that go by an alphabet soup of acronyms - the PNA (Pacific / North-American) pattern, the AO (Arctic Oscillation), and the EPO (Eastern Pacific Oscillation), to name a few.  NOAA monitors all these via various indices that characterize the individual patterns.

These teleconnections — El Niño/La Niña, the NAO, and others — are evidence that the climate system is a very complex mingling of factors on many different time and spatial scales. Yet the awareness of the impacts associated with these teleconnections is evidence of the sound science that goes into creating seasonal outlooks. Even though monthly and seasonal forecasting remains a challenging and humbling task, the success in detecting and predicting El Niño and La Niña has inspired new research in the scientific field of air-sea interaction. As meteorologists and oceanographers more thoroughly understand these teleconnections and how to model them, increasingly accurate monthly and seasonal forecasts are sure to follow.

‹ 6a. Teleconnections
A World of Weather: Fundamentals of Meteorology