‹ 1. Introduction 2a. Playing Weather on the Computer ›

Computers are chess masters. In this highly mathematical game, a geometric grid of squares partitions the board, and chess pieces move in a variety of linear directions (see the figure below). Computer-chess software must include rules and a variety of mathematically logical strategies, making the computer a formidable chess opponent. 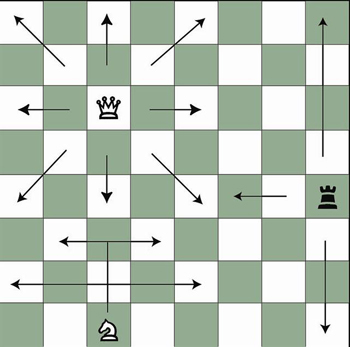 A chess board is a rectangular grid on which chess pieces move in a variety of specified ways.

Numerical weather prediction (NWP) is the name of the "game" of creating a weather forecast on a computer. In the geometric spirit of chess, the rules of NWP are very mathematical, derived from a set of complex equations that relate meteorological variables such as air pressure, temperature, air density, moisture, wind, and vertical motion. Meteorologists refer to a list of mathematical instructions that produces a virtual weather forecast as a computer model, or, more simply, a model.

A loop of predicted weather parameters based on a computer model.  Loop of larger images. Courtesy of Tropical Tidbits.

In chess, a player sometimes sacrifices a pawn or other piece in order to gain advantage (such a move is called a gambit). In the game of numerical weather prediction, meteorologists sacrifice computational perfection to gain advantage in making an informed forecast, as you will soon discover.

‹ 1. Introduction 2a. Playing Weather on the Computer ›
A World of Weather: Fundamentals of Meteorology