It all starts with the Sun, where the fusion of hydrogen creates an immense amount of energy, heating the surface to around 6000°K; the Sun then radiates energy outwards in the form of ultraviolet and visible light, with a bit in the near-infrared part of the spectrum. By the time this energy gets out to the Earth, its intensity has dropped to a value of about 1370 W/m2 —as we just saw this is often called the solar constant (even though it is not truly constant — it changes on several timescales): 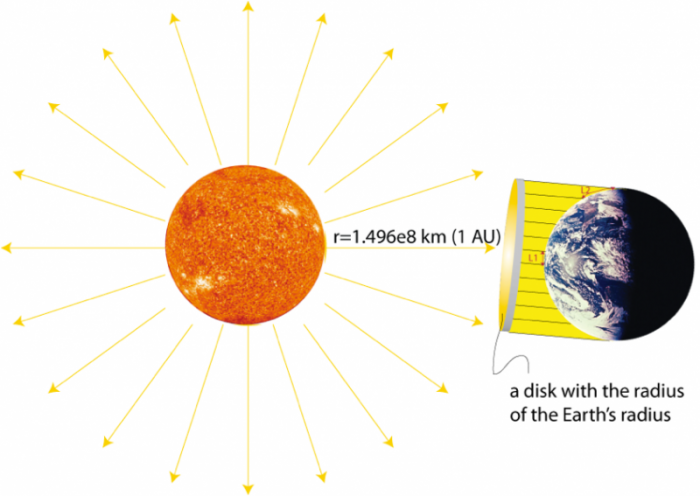 Sun's energy shining onto Earth
Click for a text description.
The climate system begins with energy from the Sun. At Earth’s distance from the Sun, the light has an intensity of 1370 W/m2 — this value is sometimes called the solar constant, although it does change over time. The Earth is so far away from the Sun that the incoming rays of energy are all essentially parallel (thin black lines within the yellow region). Note that the sunlight strikes the planet perpendicular to the surface near the equator, but it strikes at an oblique angle near the poles, such that L2>L1. This means that the insolation is more concentrated near the equator and weaker near the poles. In other words, the heat flux density (W/m2) is greater at the equator than at the poles.
Credit: David Bice © Penn State University is licensed under CC BY-NC-SA 4.0

Since the Earth spins, the insolation is spread out over an area 4 times greater than the disk shown in the figure above, so the solar constant translates into a value of 343 W/m2. This is a bit less than six 60 Watt light bulbs shining on every square meter of the surface, which adds up to a lot of light bulbs since the total surface area of Earth is 5.1e14 m2. How much energy do we get from the Sun in a year? Take 1370 W/m2, multiply by the area of the disk (pi x r2 where r=radius of Earth, 6.37e6 m), and this gives us an answer in Watts, which has units of joules per second, so if we then multiply by the number of seconds in a year, then we get the total energy in joules per year. The number is staggering — 5.56e24 Joules of energy — and is 10,000 times greater than all of the energy generated and consumed by humans each year.

Earth's Orbit, Axial Tilt, and Seasons
Click for a text description
The Earth orbits around the Sun with its spin axis (the line connecting the North and South Poles) tilted at 23.4° from a line perpendicular to the orbital plane. This tilt, or obliquity, gives rise to the variation in seasons, and the larger the tilt angle, the greater the contrast in seasons (this tilt changes on a timescale of about 40,000 years). If the tilt were 0°, there would be no real difference between winter and summer; the difference in distance between perihelion (the closest point of the orbit) and aphelion (the farthest point) is very small at present, but this, too, changes. The degree of ellipticity is called the orbital eccentricity; it changes on timescales of 95,000, 125,000, and 405,000 years. A very nice animated version of Earth’s orbit can be found here.
Credit: David Bice © Penn State University is licensed under CC BY-NC-SA 4.0 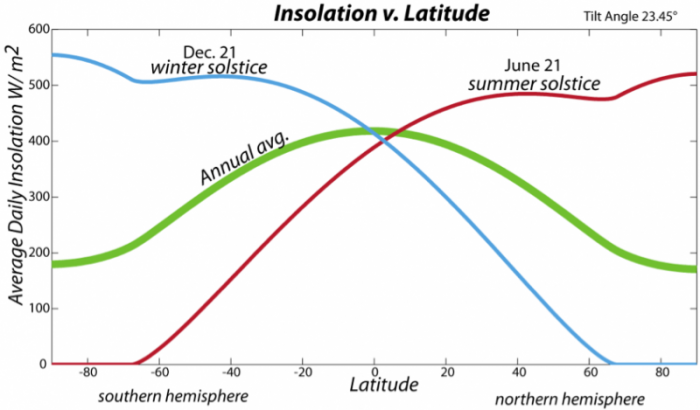 Insolation with latitude graph
Click for a text description
Solar energy reaching the Earth varies with latitude, as shown above, and with the time of the year. Note that during the polar summers, the insolation is actually higher than it ever is at the equator — this is due to the increased day length; at the equator, half of the day is typically dark, with no sunlight, which brings down the daily average in comparison to the polar summer condition where there is 24 hours of sunlight.
Credit: David Bice © Penn State University is licensed under CC BY-NC-SA 4.0

The tilt of the spin axis also means that day length changes, and these changes are most dramatic at the poles, which experience 24 hours of daylight during their summers and no daylight during their winters. The varying day length, along with the angle of incidence of the Sun’s rays, combine to control the average daily insolation variation (see figure above). On a yearly average, the equatorial region receives the most insolation, so we expect it to be the warmest, and indeed it is.

Earlier, we mentioned the Solar Constant — a measure of the amount of solar energy reaching Earth. In reality, this value is not a constant because the Sun is a dynamic star with lots of interesting changes occurring. One of the best known of these changes is the solar cycle related to sunspots. Sunspots are dark regions on the surface of the Sun related to intense magnetic activity, and measurements have shown that the greater the number of sunspots, the greater the energy output of the Sun. Early observations of these sunspots revealed a pronounced cyclical pattern to them, varying on an 11-year cycle, as shown below. 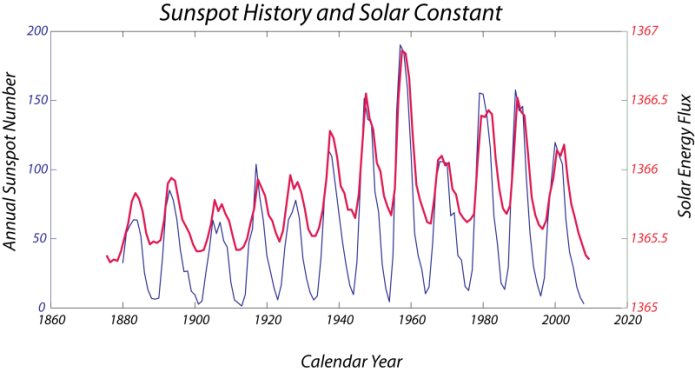 The magnitude of variation in the Solar Constant, however, is quite small and we shall see in our lab activity for this module that this amounts to a very small change in the temperature of the Earth.