The Greenhouse Effect and the Global Energy Budget

The Greenhouse Effect and the Global Energy Budget

Earlier, we noticed that if you do the energy balance calculation to figure out the temperature of our planet, it suggests that Earth should be -19 °C, which is 34 °C colder than the observed average global temperature of 15 °C. Why is Earth warmer than it should be? The answer lies in the greenhouse effect — gases in our atmosphere (including CO2, CH4 (methane) and H2O water vapor) trap much of the emitted heat and then re-radiate it back to Earth’s surface. This means that the energy leaving our planet from the top of the atmosphere is less than one would expect given the known temperature of our planet. As mentioned earlier, this effect can be represented in the simple energy balance equation as a term called the emissivity.

The fact of this greenhouse effect comes out of the very simple calculation we did above, but it can also be observed in great detail from satellite measurements of the infrared energy leaving Earth’s atmosphere.

As we discussed on the topic of black body radiation, the temperature of a body (a planet for instance) gives us a sense of what the spectrum of energy should look like — that is, a range of wavelengths and intensity of radiation at those wavelengths. For the Earth, this spectrum, as seen from satellites looking down on the surface, is very different from the expected. The figure below shows the difference between the expected and the observed. 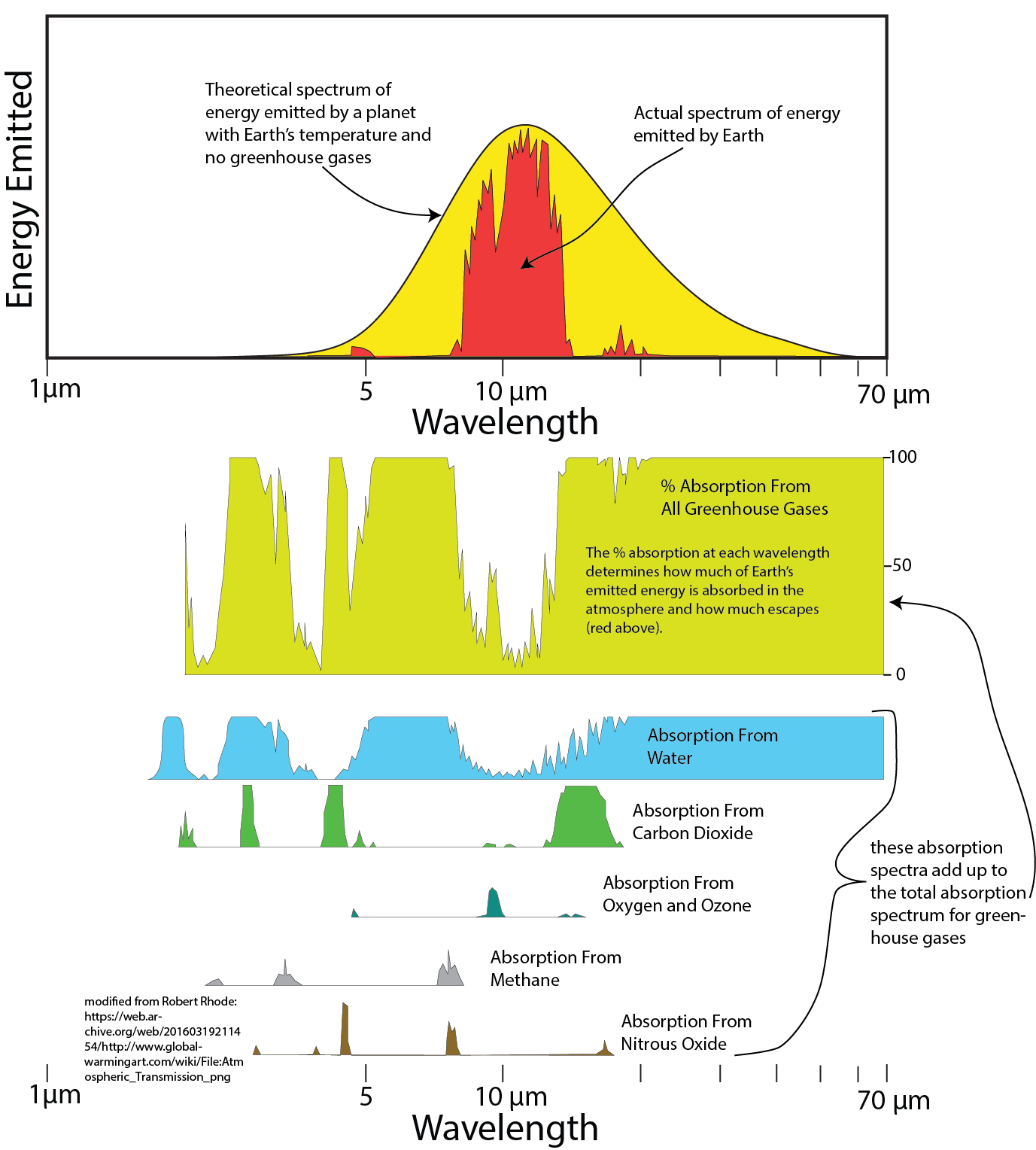 A planet with Earth's average temperature of about 15°C and no greenhouse gases would, according to the theory of blackbody radiation, emit energy at a variety of wavelengths as indicated by the black curve on top of the yellow region in the upper part of the diagram. But the actual energy emitted from Earth is quite different, indicated by the red region, which represents about 20% of the area under the black curve. In the upper panel, the yellow region thus represents energy absorbed by greenhouse gases in the atmosphere. The % absorption at each wavelength is represented by the green region and is the sum of the individual absorption spectra of the main greenhouse gases, shown below.

In fact, the same thing happens to the energy the Earth receives from the Sun — various gases in the atmosphere absorb that energy, so the amount we receive on the surface is less than what arrives at the top of the atmosphere. 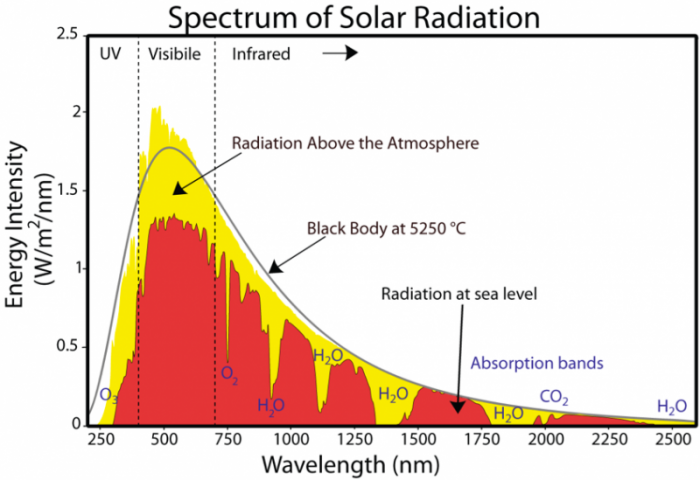 Spectrum of Solar Radiation
Click for a text description
The solar insolation spectrum observed at the top of the atmosphere — in yellow — matches fairly well the expected spectrum coming from a body whose surface temperature is 5250 °C, with a concentration of energy in the visible part of the spectrum. But, by the time the insolation gets through the atmosphere, it is missing energy in a variety of wavelength bands that correspond the absorption bands of atmospheric gases. The difference between the yellow and red is effectively the amount of energy absorbed by the atmosphere; you can see that it is less than what actually arrives at the surface, but it is nevertheless a significant quantity.
Credit: David Bice © Penn State University is licensed under CC BY-NC-SA 4.0

How do gases absorb this energy? It is basically a matter of vibrations of gas molecules being in sync with some of the frequencies of energy associated with insolation or infrared energy given off by Earth. You can think of the bonds between atoms in an H2O molecule like springs that stretch, twist, and bend at specific frequencies (nice animation of H2O movement), and if energy hits those molecules at just the right frequency, the bonds of the molecule absorb that energy and oscillate and stretch and twist more strongly.

There are numerous ways to demonstrate this heat-trapping ability of some gases — here is a nice laboratory demonstration of heat-trapping — but you can also think of the difference between the cold nighttime temperatures when the air is dry (little water vapor) compared to the warmer nighttime temperatures when the air is humid. The fact of the greenhouse effect is one of the most important things to understand about our climate system. This greenhouse effect, which is probably better described as warming produced by heat-trapping gases, is incredibly powerful — it returns more energy to the surface than we absorb from the Sun, and its strength is closely tied to the global carbon cycle, and thus the oceans, and all the biota on Earth.

Let’s try to put a lot of this together now and have a glance at the energy budget for Earth’s climate. The figure below attempts to illustrate where all the energy goes in the climate system. We start with 100 units of energy, which represents the total amount of energy Earth receives from the Sun in a year. 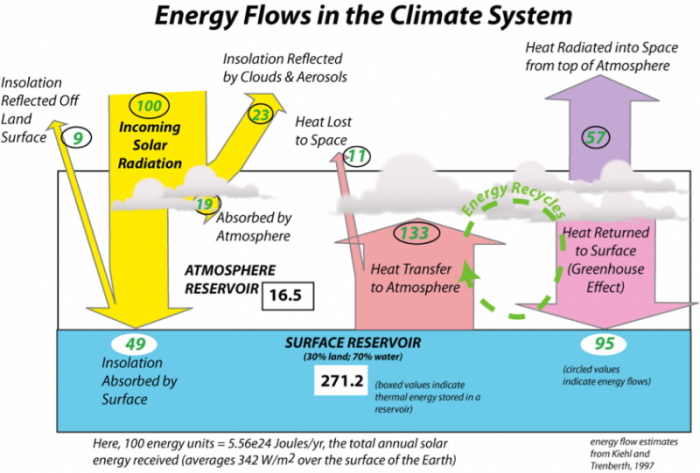 The energy budget of the climate system, based largely on satellite data; the numbers inside the circles are globally averaged, and annually averaged flows in units that reflect the percentage of solar energy Earth receives in a year. The numbers in the boxes are the amounts of thermal energy stored in the atmosphere and surface reservoirs (the surface, in this case, is mainly the surface water of the oceans). The two large flows on the right represent a kind of energy recycling program that constitutes the greenhouse effect; heat emitted from Earth’s surface is absorbed by gases in the atmosphere and then re-radiated back to the surface.

Insolation Reflected by Clouds and Aerosols: 23

Heat Radiated into Space from top of Atmosphere: 57

When the insolation strikes the atmosphere, 23 units are reflected back to space from clouds and aerosols, which are tiny particles suspended in the atmosphere. Another 19 units are absorbed by the atmosphere, as described in the figure above, thus adding thermal energy to the atmosphere. The remaining 58 units of energy reach the Earth’s surface, where 9 units are reflected back into space, and the remaining 49 units are absorbed by the surface, warming the planet. The Earth’s surface is mostly water, and by virtue of its temperature and heat capacity, it has a lot more thermal energy than the atmosphere (271.2 vs 16.5). Energy flows up from the surface to the atmosphere in a variety of ways — mainly by emission of infrared radiation, heat transfer by evaporation, and then condensation of water. When water evaporates, it “steals” energy from the surface; this energy is needed to make the phase change from liquid to vapor, and the same energy is then released when water vapor condenses to form liquid water droplets. As you can see from the diagram, the combined flow of energy from the surface is greater than the amount we get from the sun! Of this energy given off by the surface, a little bit (7 units) escapes the atmosphere because there are no gases that absorb infrared energy at wavelengths between 10 to 15 microns; the rest is absorbed by the atmosphere, which then emits infrared energy from its top to outer space and from its bottom back to the surface; this atmospheric absorption of infrared energy and its return to the surface is called the greenhouse effect. Since the bottom of the atmosphere is much warmer than the top, much more energy is returned to the Earth’s surface than is emitted to outer space.

The remarkable thing to observe and remember here is that the surface receives almost twice as much energy from the greenhouse effect than it does directly from the Sun! But, if you look at the diagram a bit, you can see that the energy sent to the surface from the atmosphere is essentially recycled energy, whose origin is the Sun.