The oceans swirl and twirl under the influence of the winds, Coriolis, salinity differences, the edges of the continents, and the shape of the deep ocean floor. We will discuss ocean circulation in detail in Module 6, but since ocean currents are critical agents of heat transport, we must include them here as well. In general, the surface currents of the oceans are driven by winds, Coriolis, and the edges of continents, and the deep currents that mix the oceans are driven by density changes related to temperature and salinity as well as the shape of the deep ocean floor.

The pattern of circulation is shown in the figure below, which represents the average paths of flow; on a shorter term, the flow is dominated by eddies that spin around. 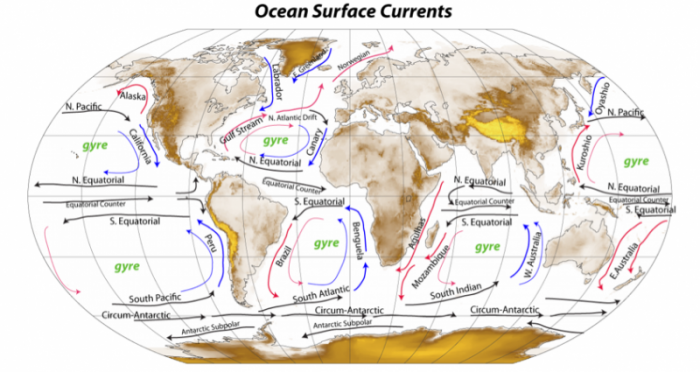 In this map, the different colors correspond to the warm currents (red), cold currents (blue), and currents that move mostly along lines of latitude and thus do not transport waters across a temperature gradient (black). These latter currents may involve warm or cold water, but they do not move that water to warmer or colder places. As mentioned earlier, these arrows depict average flow paths, but on a shorter timescale, the water is involved in eddies that move along the directions indicated by these arrows. These ubiquitous eddies are important since they mix up the surface of the oceans just as swirling a spoon in a coffee cup mixes the coffee. There are several ways of forming eddies, including intermittent winds combining with the Coriolis effect, opposing currents interacting with each other, and currents interacting with coastlines. As this pattern of currents indicates, surface ocean circulation moves a lot of warm water to colder portions of the Earth; it also moves cold water back down to warmer regions — the net effect is to exchange heat and bring the tropics and the poles a little closer to each other in terms of temperature. Or, in other words, this (along with the winds) moves surplus energy from the tropics to the regions of energy deficit near the poles.

The surface currents described above are generally confined to the upper hundred meters or so of the oceans, and considering that the average depth of the oceans is about 4000 meters, the surface currents represent a very small part of the ocean system. The rest of the oceans are also in motion, moving much more slowly under the influence of density differences caused by temperature and salinity changes. Cold, salty water is dense, while warm, fresh water is light, and the resulting density differences drive a system of flows sometimes referred to as the thermohaline circulation. In today’s world, there are two principal places where deep waters form — the North Atlantic and Antarctica, as shown below: 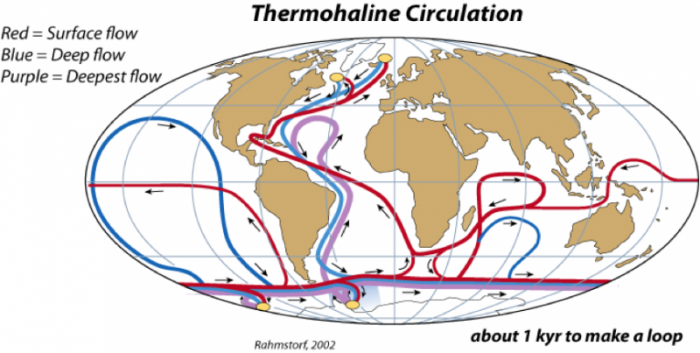 In the North Atlantic, warm, salty water from the Gulf Stream comes into contact with cold Arctic air, and as the water cools it becomes very dense and sinks to the bottom of the ocean — this is called the North Atlantic Deep Water (NADW). When NADW forms, a tremendous amount of heat is transferred from the water to the air; this heat is equivalent to about 30% of the thermal energy received by the whole polar region, so it can influence the Arctic climate in a major way. In the Antarctic, as sea ice forms at the edge of the ice sheet, pure water is removed from seawater, thus increasing the salinity of the remaining water; the resulting density increase makes this the densest water in oceans, and it sinks to the bottom — this water mass is called the Antarctic Bottom Water (ABW). Of these two deep water flows, the NADW is much greater and it flows in a complex path, hugging the bottom of the ocean as it moves through the Atlantic and into the Indian and Pacific Oceans, by which point it has warmed and mixed with the surrounding water to rise back up into the surface, where it starts its return path back into the North Atlantic, completing the loop in something like a thousand years. This flow is sometimes called the Global Conveyor Belt (we will talk a lot more about this in Module 6), and it represents an important means of mixing the global oceans.

These deep currents are very important to the global climate system in a couple of ways. One of these ways, described above, is the way that NADW formation influences the Arctic climate; this, in turn, can influence the formation or melting of ice in the polar region, which can trigger the ice-albedo feedback mechanism (see below). Another way these deep currents influence the global climate is by transporting CO2 to the deep waters of the oceans. The CO2 is dissolved into the seawater at the surface, so when deep waters form, they bring that CO2 with them, thus removing it from the atmosphere. What this does is to effectively increase the volume of ocean water that can hold CO2, which increases the total mass of carbon the oceans can hold. Indeed, these deep currents are already transporting anthropogenic CO2 and other gases such as CFCs into the deep ocean (we will talk a lot more about this in Modules 5 and 7).