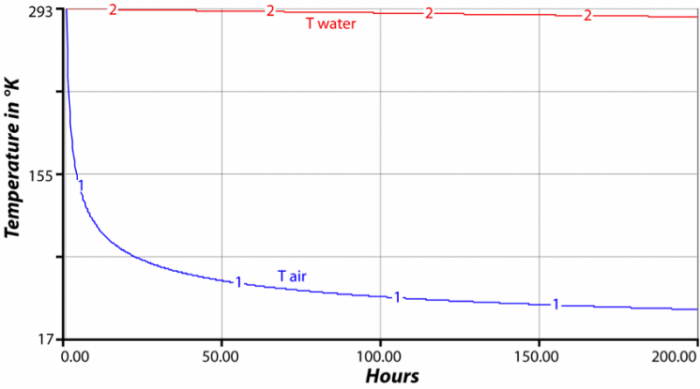 Cooling history of air and water
Click for a text description
The cooling history of two identical cubes — one consisting of air, the other of water, at the same starting temperature (293 °K, which is 20 °C). In this model, the cubes lose heat from a 1m2 surface and receive no energy from their surroundings, which is like saying that they are in a vacuum. If you did this in your backyard, the surrounding air would contribute thermal energy to the cubes if their temperatures dropped below the surrounding temperature. Notice that the temperature of the air drops off very rapidly at first, but with every drop in temperature, it gives off less energy during the next interval of time, so the rate of cooling decreases. In contrast, the water cools very, very slowly; the energy it emits is a drop in the bucket (so to speak) compared to the total amount of energy in the whole cubic meter, so the temperature change is small.
Credit: David Bice © Penn State University is licensed under CC BY-NC-SA 4.0

The heat capacity of a material, along with its total mass and its temperature, tell us how much thermal energy is stored in a material. For instance, if we have a square tub full of water one meter deep and one meter on the sides, then we have one cubic meter of water. Since the density of water is 1000 kg/m3, this tub has a mass of 1000 kg. If the temperature of the water is 20 °C (293 °K), then we multiply the mass (1000) times the heat capacity (4184) times the temperature (293) in °K to find that our cubic meter of water has 1.22e9 (1.2 billion) Joules of energy. Consider for a moment two side-by-side cubic meters of material — one cube is water, the other air. Air has a heat capacity of about 700 Joules per kg per °K and a density of just 1.2 kg/m3, so its initial energy would be 700 x 1 x 1.2 x 293 = 246,120 Joules — a tiny fraction of the thermal energy stored in the water. If the two cubes are at the same temperature, they will radiate the same amount of energy from their surfaces, according to the Stefan-Boltzmann law described above. If the energy lost in an interval of time is the same, the temperature of the cube of air will decrease much more than the water, and so in the next interval of time, the water will radiate more energy than the air, yet the air will have cooled even more, so it will radiate less energy. The result is that the temperature of the water cube is much more stable than the air — the water changes much more slowly; it holds onto its temperature longer. The figure above shows the results of a computer model that tracks the temperature of these two cubes.

One way to summarize this is to say that the higher the heat capacity, the greater the thermal inertia, which means that it is harder to get the temperature to change. This concept is an important one since Earth is composed of materials with very different heat capacities — water, air, and rock; they respond to heating and cooling quite differently.

The heat capacities for some common materials are given in the table below.

‹ Insolation up The Greenhouse Effect and the Global Energy Budget ›