A serious problem can result from the overuse of groundwater in coastal regions. Here, there is the potential for salt water to flood into the void where aquifers are drained excessively. This process, which is termed saltwater incursion or saltwater intrusion, happens readily because salt water has a higher density than fresh water, hence the pressure under a column of seawater is greater than the pressure under an equivalent volume of fresh water. This results in flow into freshwater aquifers near the coast. Humans and other mammals cannot process large amounts of sodium in water. Ultimately, it leads to renal (kidney) failure. This is why early explorers who became lost at sea were told not to drink seawater. Likewise, salt water kills crops. 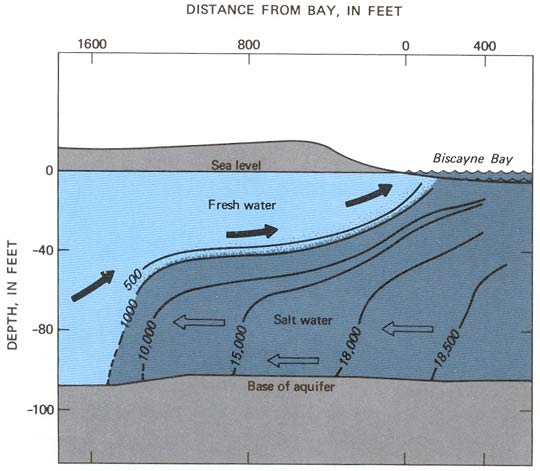 Saltwater incursion can occur in one of three ways, all as a result of over-pumping. The first is large-scale, lateral flow into the coastal aquifer, the second is vertical upward flow, and the third is flow into the aquifer from coastal streams and canals, often forced by tidal movements.

Probably the most well-studied example of saltwater intrusion occurs in south Florida, where development combined with highly irregular precipitation patterns have stressed local aquifers. The Biscayne aquifer is the main source of drinking water in the Miami metropolitan area. The aquifer is unconfined, meaning that it is not overlain by aquitards, i.e., it lies at the surface. This renders the Biscayne sensitive to changes in rainfall, evaporation, and over-pumping. Saltwater intrusion occurs as a wedge underneath the surface with a transitional interface with the overlying Biscayne aquifer. 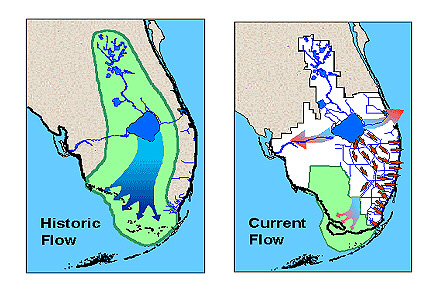 Changes in the drainage of the Everglades as a result of development in south Florida.
Credit: NASA

The history of incursion dates back to the 1900s as defined by the first measured increase in salinity (chloride levels) in the Biscayne aquifer. Construction of drainage canals began in 1909 and this resulted in the further inland intrusion of salt water. Intrusion continued unabated until 1946 when salinity-control structures were constructed to prevent inland, tidal movements of salt water. In the 1960s, a large drainage canal system was constructed as part of the massive development of south Florida. 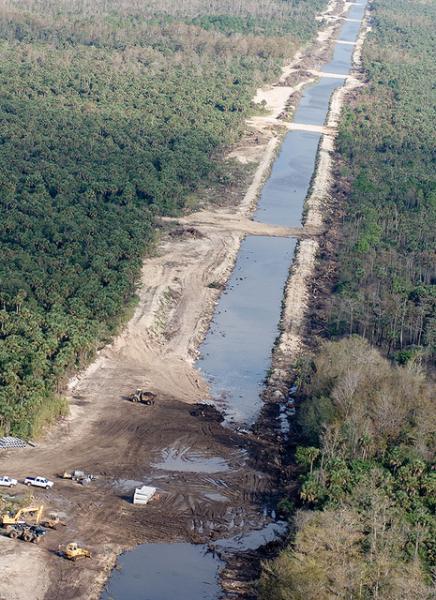 The canals included flow-control structures to prevent excessive drainage from the canal system. However, the design of the structures led to a lowering of freshwater levels in the Biscayne aquifer, leading in turn to increased saltwater intrusion, especially during drought years. Continued movement of the saltwater lens towards the coast and inland has occurred as the new parts of the aquifer have been developed and others tapped less intensively. As in other coastal regions, saltwater intrusion is an ongoing issue that will require constant monitoring as development continues, and demand on aquifers increases. The potential of saltwater intrusion is one issue behind the development of desalinization technology in arid regions.

Sea level rise will increase salinization of coastal aquifers, especially in areas that are dry or subject to seasonal rainfall variability.