The following video provides a schematic summary of the water cycle.

Video: The Water Cycle (1:23) This video is not narrated.

The hydrologic cycle describes the large-scale movement of water between reservoirs including the ocean, rivers and lakes, the atmosphere, ice sheets, and underground storage or groundwater. 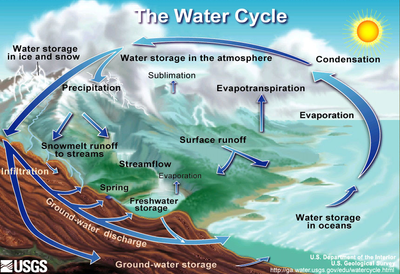 Water evaporates from bodies of water such as the ocean and lakes to form clouds. The moisture in clouds ultimately falls as rain or snow, some of which returns back to the ocean, lakes, and rivers. The remainder percolates into the soil where it reacts with organic material and minerals and ultimately moves downwards to form groundwater. The amount that percolates depends strongly on evaporation as well as soil moisture, as shown in the video below.

Video: NASA Land Globe Animation (1:00) This video is not narrated.

As rain and snow fall to earth over the land, the increase in water competes with the loss of water due to daylight evaporation.

Different kinds of soil retain different amounts of water in the ground, so the flow of rivers and the filling of underground aquifers can be hard to predict.

Freshwater used for drinking, agriculture, and industry derives dominantly from rivers, lakes, and groundwater, with the latter reservoir accounting for approximately 30 percent of freshwater on the earth’s surface by % of potable (i.e., safe drinking) water. In the US, 86% of households derive water from public suppliers, and 14% supply their own water from wells. Nevertheless, households utilize only one percent of water extracted, the remaining 99% of water is supplied to industry (4%), agriculture (37% compared to 69% worldwide), and thermoelectric power plants (41%). Water use in most areas of the US has increased substantially over the last century.

‹ Distribution of Water on the Earth’s Surface up Lab 8: Stream Flow ›