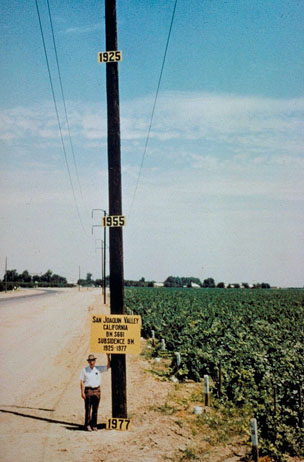 Photograph showing the amount of land subsidence in the San Joaquin Valley as a result of overpumping for irrigation
Credit: United States Geological Survey, 1977

Like any layer in the subsurface, aquifers, and aquitards structurally support the overlying strata, and in turn, the ground level. If an aquifer is excessively pumped, water is drawn in from the surrounding aquitards. In cases where the aquitards are soft and unconsolidated, for example, composed of clays and silts, overpumping can cause these layers to fail structurally, expel much of their water, and literally collapse. When this happens, the overlying ground level can be lowered as a consequence, a process known as subsidence.

In the case of arid regions where aquifers are naturally recharged at very slow rates and where they are pumped intensively, significant subsidence can result. Some of the most drastic and best-known subsidence resulting from overuse of aquifers occurs in the San Joaquin and Sacramento Valleys of California, where the land level has subsided up to 10 meters in the last 90 years.

The San Joaquin and Sacramento rivers flow together in an area called the Sacramento-San Joaquin River Delta, an inland version of the Mississippi Delta where a series of tributary channels meander over a low-lying, flat plain. The area is an inland estuary with the Pacific Ocean on its western edge. The Delta area, as it is known, is some of the most productive farmland in the nation and provides 70% of the water supply of northern California. The water in the Delta channels has been controlled by human-made earthen levees to prevent flooding of low-lying agricultural areas as well as large developed areas including parts of the cities of Tracy, Stockton, and Sacramento. The 2600 mile long levee system has been built over more than 100 years and is beginning to suffer from the test of time. Subsidence has occurred as a result of oxidation of organic material in soils and compaction from farming, and the structures have been weakened by erosion and seepage. Areas behind the levees have subsided by up to 25 feet, placing further strain on the structures. Failure of levees has already occurred over 30 times in the last three decades, leading to substantial flooding, massive evacuation and six fatalities in Marysville in 1997.

Flooding in California due to levee breaks

Levees in the delta are maintained by the Army Corps of Engineers to withhold the strain of a 100-year flood. However, increased precipitation as a result of climate change has led some to question the Corps’ definition of the 100-year flood, and the same critics warn of catastrophic levee collapse, which could lead to massive numbers of fatalities and enormous property damage. Ultimately, what is required is a significant investment in fortifying levees to prevent this from happening.

Subsidence as a result of overpumping is actually a relatively common problem, especially in areas with rapid population growth, for example around Las Vegas, which until recently was the most rapidly growing city in the US. In Las Vegas, water use has exceeded recharge for many decades, leading to structurally controlled subsidence of up to 2 meters along pre-existing geological faults. Subsidence of some 3 meters has also occurred in the area around Houston as a result of population growth combined with extraction of large amounts of oil and gas from the subsurface. 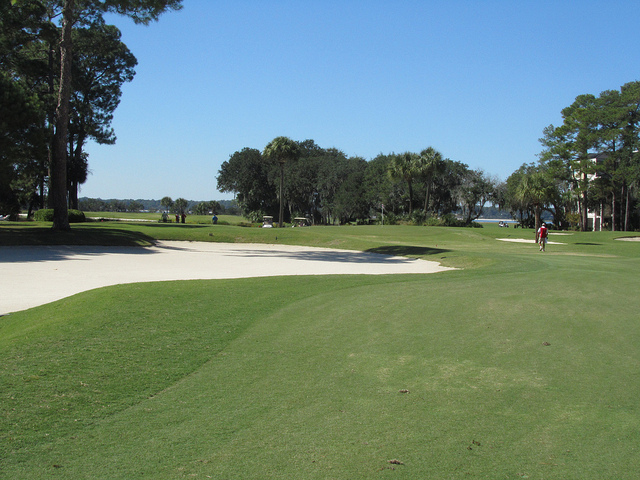 As we will study in detail in Module 10, significant subsidence in the Mississippi Delta region around New Orleans has resulted partially as a result of over-pumping. Even along the east coast of the US in the Carolinas, subsidence, although not as severe as out west and along the Gulf Coast, has resulted from over pumping for agriculture and industry. In fact, one of the major demands on water in the Carolinas is for golf courses (see the lush grass in the photograph above), which account for about 60% of irrigation usage in some areas.

Without major changes in water usage and conservation, subsidence will continue and even accelerate into the foreseeable future.