My one experience with boogie boarding in Hawaii was a disaster. I got caught in no man's land with 15 feet waves breaking on me and my board around my ankles. It took me five minutes to escape to shore by which time I had consumed a lot of seawater. I had to take a night flight back to the mainland and all I can say was it was not fun! The largest body of water on Earth is the ocean. Desalinization, the removal of salt from seawater offers great promise to supply citizens in arid regions in the future to come. Here we explore the technology and potential of this technique.

Water desalinization (often termed desalination) has enormous potential for supplying clean water for drinking as well as for irrigation, especially in regions that are arid or have irregular precipitation and are near the ocean. Desalinization is carried out in a number of ways. The most productive method in terms of the amount of water produced is multi-stage flash distillation (MSFD), which produces over 80% of the global volume of desalinized water today. MSFD is carried out in a plant divided into different units, each with a heat exchanger and a collector for the condensate.

The units or reservoirs are maintained at different temperatures, and critically, also at different pressures. The pressure of each reservoir is determined by the boiling point of water at the temperature of the reservoir (lower temperatures require higher pressure for boiling). A brine-heating unit is positioned near the highest-temperature reservoir. Seawater coming into the plant is pumped from the coldest reservoir towards the hottest reservoir and is gradually heated by water traveling the other side of heat exchangers. When the water is pumped into the brine heater it is heated further, then it is cycled back progressively through the lower temperature stages, returning on the other side of the heat exchangers that warmed it on its entry to the plant. In each of these stages, the water is above the boiling point and is warmer than the water on the other side of the heat exchanger. This water then begins to condense leaving desalinized water and brine, which settles in the reservoir. The key aspect of the technique is that it is extremely energy efficient, as water provides much of the heat to itself. However, there are issues in that the water produced still can have impurities if there isn’t significant treatment before entry into the plant. In addition, the technique leaves a large about of brine that needs to be disposed of (this waste is usually disposed of in the ocean).

There are other desalinization processes that also use distillation for the removal of salt and other chemicals. However, the main alternatives to MSFP are those that use reverse osmosis (RO). RO is the most common process used in desalinization even though RO desalinization plants currently produce about 15% of desalinated water by volume. 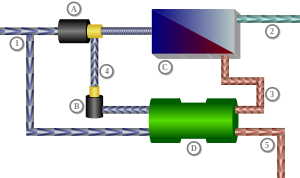 Like MSFD, RO requires significant pretreatment to remove solids and bacteria, and to adjust the pH and chemistry so that products such as calcium carbonate and metal colloids do not form. This is critical in the case of seawater, which contains high amounts of turbidity, and organic materials that can clog RO membranes. RO takes place when water is exposed to pressure as it passes through a membrane. As its name implies, the process is the reverse of osmosis, which is the process whereby solutions separated by a barrier such as a membrane flow from the side with low concentration to that with high concentration. When pressure is applied to the membrane in excess of the osmotic pressure, the fluid will flow from the side with the high concentration to that with the low concentration. In so doing, solutes remain on the membrane and the fluid flows from one side to the other. In RO plants, water passes through a number of membranes before it is pure enough for drinking.

Desalinization is critical to growth and sustainability in countries in the Middle East, and much of the technology was developed here. Today, Saudi Arabia is the largest producer of desalinized water, followed by the United States. In the US, desalinization plants are focused in California and Florida. Countries such as Australia, with extensive arid regions and highly irregular precipitation, are gearing up to increase the amount of water produced by desalinization. For example, in Australia, investment in desalinization will involve a tripling of the number of plants between 2004 and 2013.

Desalinization technologies have applications beyond seawater. For example, desalinization is applied to treat groundwater in inland areas that are too salty for drinking or for irrigation, for example in the El Paso region of Texas. Desalinization can also be used to treat effluent from sewage treatment plants.

In summary, the future of desalinization is very promising, and this technology will likely play an increasing role in countries that can afford to develop it.

‹ Management in the Future up The Growing Battle Over Water ›