As we have seen, climate change will alter precipitation patterns on a global scale, leading to higher rainfall in some areas and significantly lower rainfall in others.

Superimposed on this will be changes in evaporation, runoff, and soil moisture, which will generally exacerbate droughts in areas where rainfall decreases. Generally speaking, regions that are already dry will not get wetter in the next century, and many will become significantly drier. 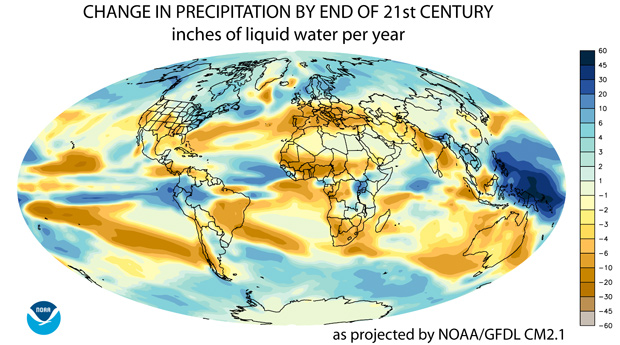 Predicted change in precipitation by the end of the 21st century as a result of climate change.
Credit: NOAA, Discover Magazine: 2 Degrees of Separation

Regions that are already wet will often become much wetter in the future. Climate change will act in tandem with stressors on the water sector as a result of population increase. Therefore, climate change will generally render precipitation patterns more unequal than they are today. Further, as stated by the Intergovernmental Panel on Climate Change (IPCC),

The negative impacts of climate change on water resources….will outweigh the positive impacts in all regions of the world. Those places in which precipitation and runoff are projected to decline are likely to derive less overall benefit from freshwater resources. In those places that receive more annual runoff, the benefits of increased water flows are expected to be offset by the adverse effects that greater precipitation variability and changes in seasonal runoff have on water supply, water quality, and risk of flooding. (Intergovernmental Panel on Climate Change)

In more detail, recently observed trends of decreasing precipitation over latitudes 30°N to 10°S are projected to continue. Thus arid and semi-arid regions in the south-central US, southern Africa, and the Mediterranean are expected to experience decreasing water supply. In some of these regions water availability is projected to decrease 10-30% by 2050. The IPCC estimates that two-thirds of the world population could be living under water stress or water scarcity by 2025.

The areas that are expected to suffer some of the worst consequences of changing precipitation are generally some of the least developed and poorest nations with some of the highest rates of population growth. This combination will likely lead to significantly reduced groundwater recharge, declining surface water reservoir levels, increase in the frequency of groundwater pollution, and most critically, to rapid declines in per capita water availability.

‹ Saltwater Incursion up Drought and its Consequences ›