Until 2011, much of Australia was in a decade-long drought, providing a grim picture of what the future possibly holds for the driest continent. The Murray-Darling Basin is the most productive agricultural areas in the country, producing a third of Australia’s food. The basin covers over a million square kilometers, about one-seventh of the whole continent, and includes some 20 rivers, most notably the nominate rivers, the Murray and Darling. The region is generally dry (average precipitation is about 500 mm). The total flow of water carried by the Murray and Darling Basin Rivers is significant compared to other Australian rivers, but the amount is dwarfed by the flow of other river systems with equal drainage areas. Thus, the region is prone to drought, and there have been numerous times in the past when the Murray, and especially the Darling, have completely dried up. The Murray- Darling basin produces wool, cotton, wheat, sheep, cattle, dairy produce, rice, oil-seed, wine, fruit, and vegetables. And three-quarters of Australia's irrigated crops and pastures are grown in the basin. Thus, the rivers are vital to the Australian livelihood.

Drought in the Murray-Darling Basin

Between 2006 and 2009, precipitation in the mountains in the eastern part of the drainage area, which supplies nearly 40% of the water to the rivers, was lower than at any historical time. Other parts of the basin had a total rainfall deficit of about 1.5 meters below normal for the period 1996-2008. Overall warmer temperatures that led to higher evaporation rates exacerbated the impact of the drought. For example, the 1oC warming in the basin area is roughly equivalent to a 10% increase in evaporation.

In recent decades, studies have repeatedly confirmed that the environmental health of the Murray-Darling Basin is in decline. On top of the drought, over-extraction of water as a result of past entitlement system has combined with high salinity levels and overall poor water quality, the growth of blue-green algae, declining wildlife, and land degradation to provide a dismal outlook for the basin. 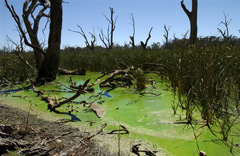 To preserve the water resources of the Murray-Darling, the Australian government has developed a basin plan with a critical provision: an annual water usage (termed a level of take) from the Murray-Darling rivers of 10,873 gigaliters per year (GL/y) that is environmentally and ecologically sustainable for the long term. This take is a cut of about 2750 gigaliters over current levels and will be instituted over a seven-year period. The government is also setting aside some $6 billion to invest in infrastructure, including upgrades to irrigation systems. The plan, which became law in 2012, divides the basin into different surface water (i.e., rivers and lakes) and groundwater areas and sets goals for water usage by agriculture and communities in each of these areas. 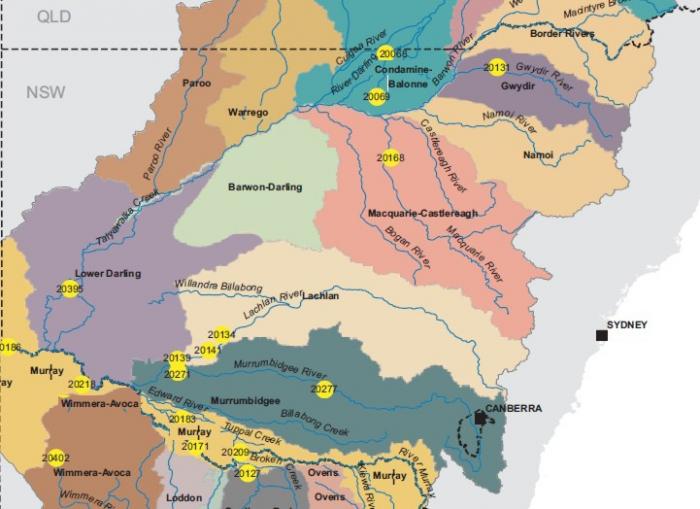 Moreover, these districts will have the right to trade water with one another. Overall the plan is one of the world’s most forward-thinking water use policies. However, it is turning out to be highly controversial. Environmentalists have charged that the plan is too little, too late, insufficient to ensure continued flow through the basin, and not enough to alter the high salt loads in river waters. Politically, there are also significant issues with some areas targeted for much more drastic reductions in water use than others. However, the policy has the most serious implications for individuals, especially farmers in areas where the most stringent reductions are slated. Enforcement of the water restrictions will almost certainly cause many farmers to go out of business. You can Google “Murray Darling water” for the latest on how this policy plays out.

‹ Drought and its Consequences up China: A National Water Emergency ›