On August 10, 2003, the mercury at Faversham in Kent reached 38.5oC (101.2oF), the hottest temperature ever recorded in the UK. Over 32 inches of snow fell at Dulles airport, Washington, DC on February 5th and 6th, 2010. Hurricane Sandy made landfall in New Jersey on October 29th, 2012, a very late point in the year for a storm to reach the northeastern US coast. January 8th, 2013 was the hottest day ever for Australia with an average temperature for the entire continent of 40.3oC (nearly 105oF). The AVERAGE (day and night) temperature in Phoenix in June 2017 was almost 95 degrees. And nearly 61 inches of rain fell around Houston during Hurricane Harvey in August 2017. Each of these events provoked arguments in favor or against global warming. Yet, on their own, none of them were definitive proof one way or another.

To make a case for climate change, we need to find the average global climate signal, which is often difficult to discern from the noise of short-term variations and regional differences associated with what we call weather. It is very important to remember that climate is the time-averaged weather, so when we are talking about climate change, we are not talking about the weather that you experience on a daily or seasonal basis — a single heat wave is not evidence of global climate warming, just as one cold snap does not constitute global climate cooling. But repeated, unusual heat waves will shift the average temperature of a region, and this can be taken as a manifestation of a warming climate. The climate is inherently variable over time and space, so detecting a meaningful trend is a challenge that requires great care, a lot of data and often some complex statistics.

Now, a word of warning, you might find the remainder of this page a little dull! However, it happens to be one of the most essential topics of the whole issue of climate change. We absolutely have to understand the significance of trends if we are going to interpret them!

Let’s consider a hypothetical case to help you better understand the nature of the problem. The mean annual temperature is the average temperature over the course of a year, and it varies in a way that we can simulate with a randomly generated string of numbers (geoscientists often refer to such variation as “noise”) added to a constant, long-term mean temperature. We would see something like this: 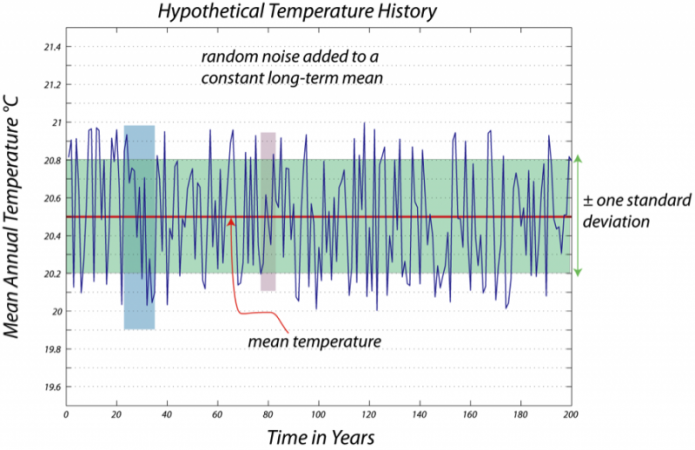 Hypothetical Temperature History
Click for a text description of Hypothetical Temperature History
Here, you see 200 years of this made-up temperature history; the thin dark blue line jumping all over the place is the mean annual temperature. If we can calculate the long-term mean (over the whole length of time here), it is 20.5°, shown by the red line. That long-term mean is a good way of describing the state of the climate, but on a shorter timescale, the temperature obviously varies quite a bit from the mean value. About 67% of that variation is contained within the green zone, which is plus or minus one standard deviation from the mean temperature. So, there is a good deal of variability here, but in reality, the climate is essentially stable if we focus on the mean. But we have to be careful about how much time we average over. For instance, if we were to just look at the ten years included in the light blue rectangle, you might conclude that the climate is cooling; and if you look at the light red rectangle, you would say that the climate is warming. But, of course, the climate, in this case, is not really cooling or warming — we are just looking at variation due to weather.
Credit: David Bice © Penn State University is licensed under CC BY-NC-SA 4.0

In this case, you might say that if the temperature strayed out of the green zone, you have unusually hot or cold weather, and you would expect this kind of temperature excursion to be a standard feature of the natural variability of the region's climate. But, the green zone has more or less fixed limits, so the standard for calling something a heat wave does not change over time.

Now, let’s look at another hypothetical case where the climate really is warming, but there is still the natural variability or noise on a shorter timescale. 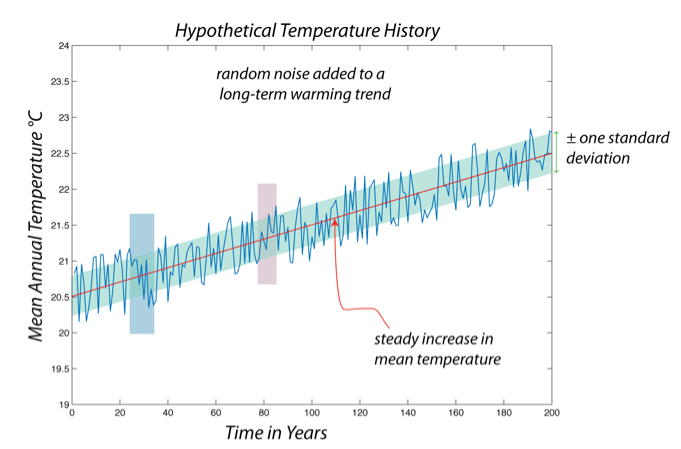 In this case, the same random noise is added to a gradual increase, indicated by the straight red line, which represents a long-term warming trend.
Credit: David Bice © Penn State University is licensed under CC BY-NC-SA 4.0

If you think of the upper edge of the green zone on the previous figure as indicating the line for defining a heat wave, look what happens in a case where there is a steady warming of the climate, with the same kind of weather causing the rapid ups and downs. If at time 0, we said that a temperature of 21°C was a heat wave, that becomes the mean climate temperature by time 60 in the above figure — so, what previously was a rare warm spell is now just the standard. This means that by older standards, "heat waves" become more common as time goes on.

Note that, once again, we can find areas in this above figure where a shorter time period would seem to indicate cooling or warming. This reinforces the idea that we can’t really talk about climate change by looking at just a few years, and leads to the question of how much time we do need to look at to get a good understanding of climate change. In general, the longer the better. But just to illustrate this, consider the following, where we take the same kind of hypothetical temperature record as above and systematically find the linear trends over time, with windows of varying length that slide along through the 200-year record. 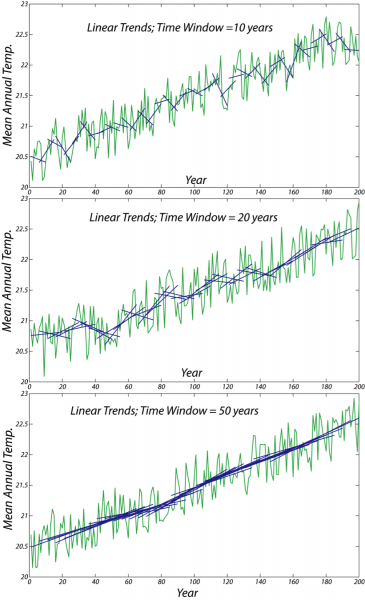 Three graphs of Temperature History-linear trends
Click for a text description of History-linear trends.
The straight blue lines above represent the linear trends in the temperature records for different windows of time. These windows move along from time 0 to time 200, and the temperature data within the windows provide the basis for estimating the best fit straight line for those data. In the upper one, the time window is just 10 years long, and you can see that the linear segments frequently change the sign of their slope, never giving a good indication of the gradual warming trend that exists. As the time window increases to 50 years, the linear segments are much more consistent and give a better sense of the gradual warming trend that is really embedded in the record.
Credit: David Bice © Penn State University is licensed under CC BY-NC-SA 4.0

Why do we care about this? There are all sorts of reasons why this is important and interesting, but here are three primary reasons.