The last four years brought devastating fires to California! Fire researchers called 2017 the “new normal, but 2018 was an even worse season with destructive fire and multiple fatalities and 2020 was the most devastating of them all. Deadly fires are not unique to California; in fact, Australia has a history of particularly devastating fires. And climate change is going to provide all of the ingredients for more fires in the future: more fuel, more effective ignition, as well as the conditions to keep fires burning. If you thought that the fall of 2020 was an apocalypse, wait for the future! 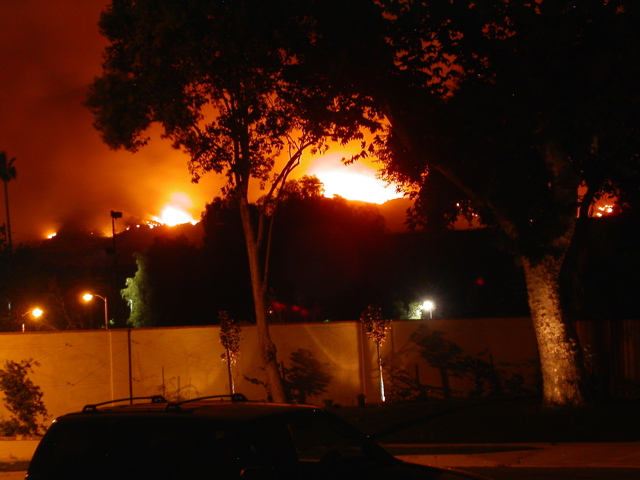 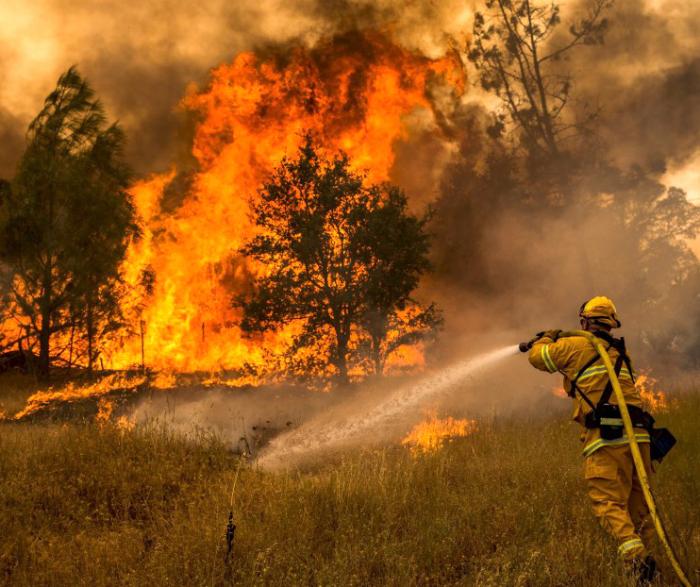 In October 2017, fires spread across several Northern California counties just north of San Francisco, including the famous wine country in Napa and Sonoma. There were 250 fires that raged for days in very dry and windy conditions. These fires charred some 245,000 acres, caused the evacuation of 90,000 people, and led to 44 fatalities. A total of 8900 structures and $8 billion in property were lost. 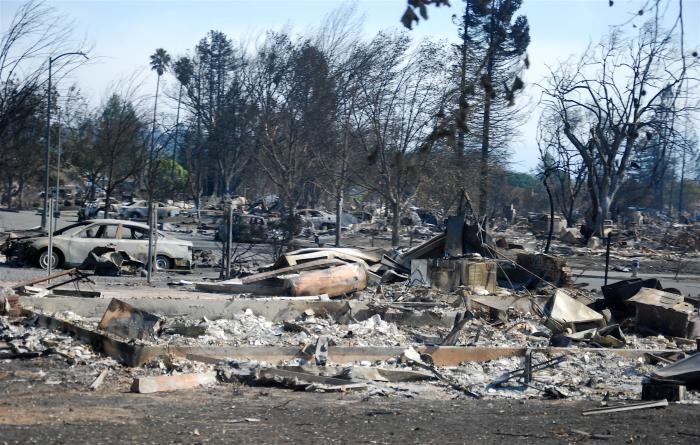 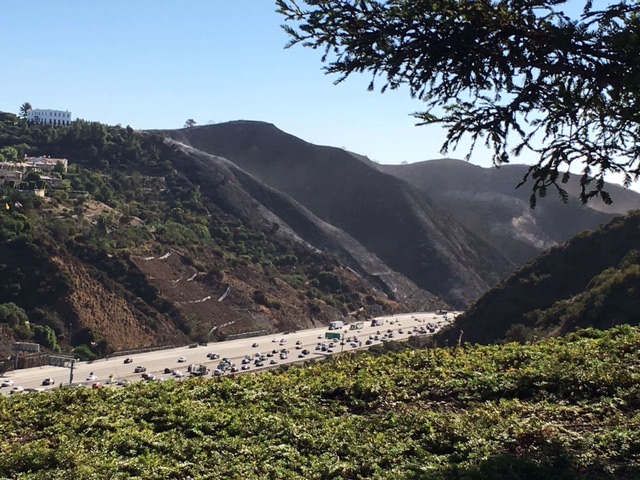 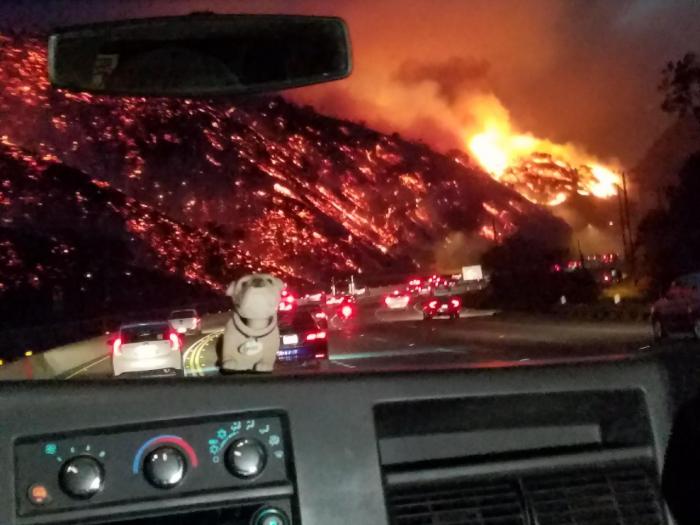 Fire on the 405 freeway, near UCLA
Credit: An Yin

Moving on to December 2017, fires extended from Santa Barbara north of Los Angeles to just north of San Diego to its south. A single burn, the Thomas fire is was larger than New York City and Boston combined! The large blazes in southern California consumed more than 300,000 acres, destroyed over 1000 buildings, and led to more than $2 billion of property loss.

The deadly Camp fire, the most deadly and destructive fire in California history began November 8th, 2018 from a spark from an electrical wire. By the time it was finished two weeks later, the fire had burned more than 1500,000 acres around the town of Paradise. The fire occurred late in the season and was whipped up by strong winds and abundant fuel from the previous rainy season. A virtual firestorm quickly converged on Paradise, a ridge-top town that was used to fires but had grown fast and without good evacuation planning. On November 8th, the evacuation order came too late, and many folks did not receive it because cell towers were down. Because the call was so late, evacuation could not occur in an orderly fashion, from one side of the town to the other. Hundreds of vehicles quickly jammed the three routes out of town and the fire quickly trapped many people in their cars. Folks who did not get the evacuation order were trapped in their homes. A total of 86 people in Paradise were killed and the town was almost completely burned down.

In the wake of the fire, the large utility company PG&E filed for bankruptcy to avoid major lawsuits. Turns out the company discussed turning off the power grid in the days before the fire began but decided not to. Now in the wake of the fire, companies will be much more likely to turn off the grid if there is a chance of fire and this will impact millions of customers in California.

As it turns out the Camp fire was only one of two major fires that began on November 8th. The massive Woolsey fire west of LA also began that day, burned 97,000 acres, killed three people, and forced the evacuation of 295,000 people.

The Camp and Woolsey fires are the “new normal” for California and the state must deal with difficult issues such as vegetation management, sensible development, evacuation planning, and regulation of power companies. 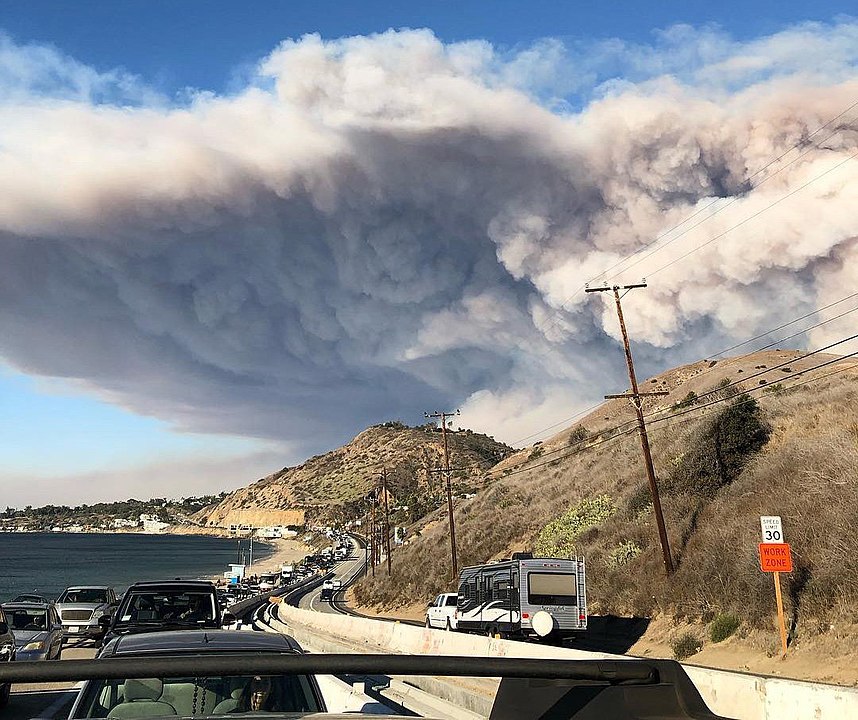 Woosley Fire. The large smoke plume from the fire encroaching on Malibu on November 9, seen from the Pacific Coast Highway.
Credit: image by Cyclonebiskit from Wikipedia, licensed under CC BY-SA 4.0

And then came the record-breaking year in 2020. In California, more acres burned than ever before (over 4.3 million), at least in recent times, with over 9200 separate fires including the first “gigafire”, the August Complex Fire that burned more than 1 million acres (over 1500 square miles)! Total damages exceeded $2.5 billion and 32 people perished. Although arson was to blame for some of the fires, more often they were sparked by lightning that occurred in thunderstorms without rain. The largest fires in Northern California, the SZU Lightning Complex fire, the LNU Lightning Complex Fire, and the August fire were all started by lightning strikes. 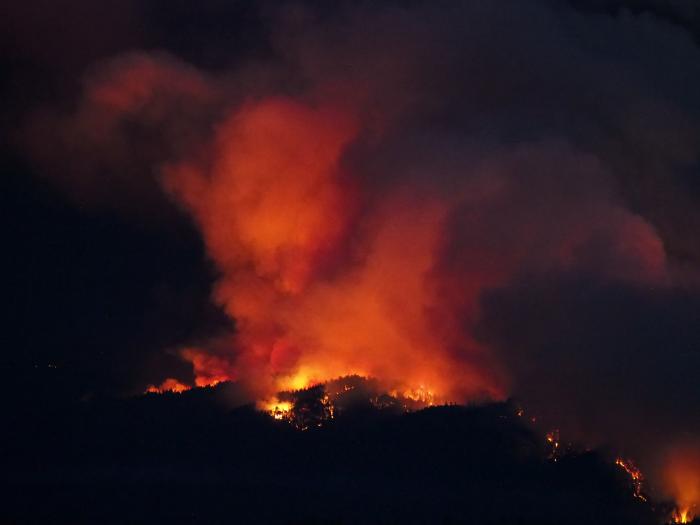 The northern extent of the CZU Lightning Complex fire along Butano Ridge, August 18, 2020.
Credit: Image by Inklein from Wikimedia, licensed under CC BY-SA 4.0 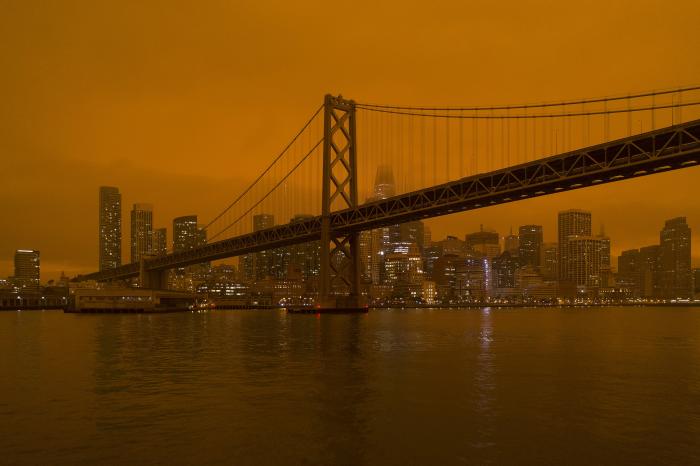 Smoke from the North Complex Fire over the Bay Bridge on September 9, 2020.
Credit: image by Christopher Michel from Wikimedia Commons licensed under CC BY 2.0

The fires were caused by the continued drought in the state and across the western US, and, indeed large fires occurred over much of the region as far east as Colorado and as far north as Washington state. In all over 52,000 fires consumed almost 9 million acres.

The year was also notable for fires that encroached on Seattle and especially Portland. In fact, wildfires caused an especially scary situation in the latter metropolitan area where 40,000 people had to be evacuated and 500,000 lived in evacuation warning zones at the height of the blazes. These fires in the northern part of California, Oregon, and Washington were responsible for extremely hazardous air quality for weeks, and in all over 17 million people experienced unhealthy or hazardous air this year. In fact, the air in Marion County in Oregon was so polluted it registered off the measurement scale. The air quality in Northern California including Sacramento and San Francisco was unhealthy for weeks, and young, elderly, and people with asthma, COPD, and other preexisting conditions were advised to remain indoors. The smoke can cause burning eyes and lung ailments including bronchitis and aggravate heart and lunch diseases. The elevated levels of fine particulates including hazardous compounds may also cause longer-term health issues. This public health situation was especially difficult as it superimposed on Covid-19.

2020 will be remembered for the scale of the western fires but also for their profound impact on public health. On top of the possibility of evacuation and loss of property, many residents of the western states were awakened to the prospect that their “new normal” fire season included toxic air.

The 2020 fire season in California was the worst on record. However, these are not the most devastating fires in Earth’s recent past. Black Saturday Bushfires in February 2009 in Victoria, Australia were fueled by extraordinary heat and strong winds. At the peak of the inferno, there were some 400 blazes. Conditions leading up to the fires were extraordinary. Mercury hit 116 degrees in Melbourne in a heatwave that started the week before the fire, and in the peak of the summer drought, the dry brush was perfect fuel. On the fateful Saturday, the first fire was started by arson. Falling power lines and lightning ignited other fires. Fires consumed some 1.1 million acres, destroyed whole towns, caused some $4.4 billion in damage, and killed 173 people. Most of the damage was done in the first few days, but the blazes raged for weeks. One of the astounding aspects of the fires were observations by firefighters of sideways mini-tornadoes, technically called horizontal convective rolls. As the air at the surface warmed and rose, it was forced to move in a corkscrew pattern-oriented parallel to the ground. This created bands of alternating fast and slower surface winds. Fast winds surpassed 30 mph and ignited huge swaths of land in a catastrophic fire. There are terrifying stories of people getting swept up in the flames trying to escape the inferno on tiny mountain roads.

The late part of 2019 and the early stages of 2020 have brought more intense wildfire to Australia, especially near Sydney in the southeast. The season began very early as a result of the decade long drought and intense heatwaves (see Heatwave page this module). As of this reporting fires have burned millions of acres, destroyed thousands of buildings, and killed dozens of people and millions of animals including koala and kangaroos. The smoke has caused unhealthy air in eastern Australian cities and the plume has drifted as far as New Zealand. The fires have caused a political upheaval because Australia has a large emission of carbon per capita and produces a significant amount of energy from coal. Given how susceptible it is to climate change, many citizens feel that the country is not doing enough to curb emissions. 2019-2020 is a glimpse of the future for Australians. 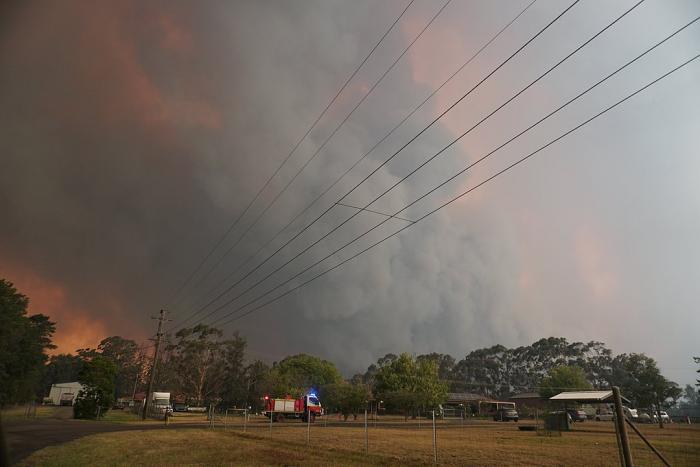 So, how is increased fire activity related to climate change? Fire is very much a part of the ecosystem in places like Australia, California, South Africa, and Southern Europe. Even before people were around, fires ignited by lightning occur regularly in environments with dry seasons, as nature’s way of germinating drought-resistant species and fertilizing the soil. But people have made fire events much more common. First, many fires are started by arson. Clearly, heat and drought are good for fire, and as we have seen, both of these ingredients will increase in the future as a result of anthropogenic climate change. But the other key aspect of fire is fuel and which is supplied by precipitation and active growth of vegetation. Climate change is likely to cause more variability in temperature and precipitation that will create more contrast between drought and wet years. This will lead to greater fire risk. The heavy rains in California in the winter of 2016-2017 caused a significant growth of vegetation in uncultivated hills and canyons surrounding residential areas and this dried out in the hot and dry 2017 summer. Then, once the warm fall Santa Ana winds arrived, the recipe for disaster was all ready.

The main culprit for the increase in fires in the western US is the long-term drought. However, development in forested and brushy areas that are prone to burn. Clearing of brush in populated areas has led to the establishment of invasive plant species that grow very rapidly and provide fuel when they die back in the dry season. There has been constant friction between responsible forest management with regulation and development. The potential for gigafires will force a reckoning between planning and forestry departments in the future so that forest and brush can be managed through controlled burns. Many communities are also replanting native plant species and using animals to clear out areas overwhelmed by invasives. At the same time, growth needs to be managed so that safe evacuation can occur in the case of a large fire. Sadly, highly destructive wildfires are part of California’s future.

As are mudslides. The huge Thomas fire destroyed so much vegetation that held hillslopes in place. They were followed in early January by major rains that led to torrents of mud from hills into valleys. The catastrophic mudslides killed at least 20 people and caused massive property damage. Fire and mud are intricately related. 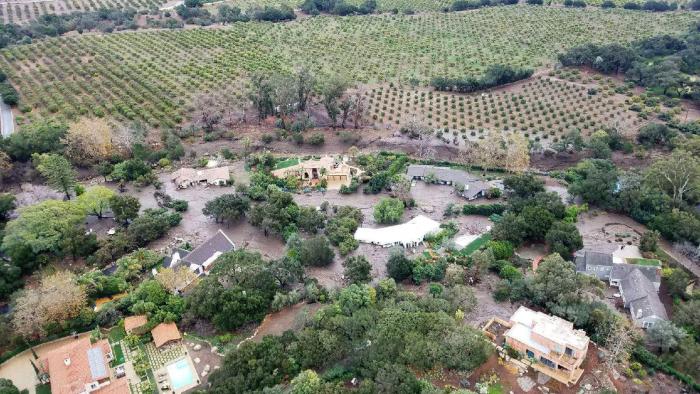