One of the most striking examples of climate change is related to the Arctic sea ice; the image below shows the coverage of ice in September of 2011, at which time the long-sought Northwest Passage is open for shipping. 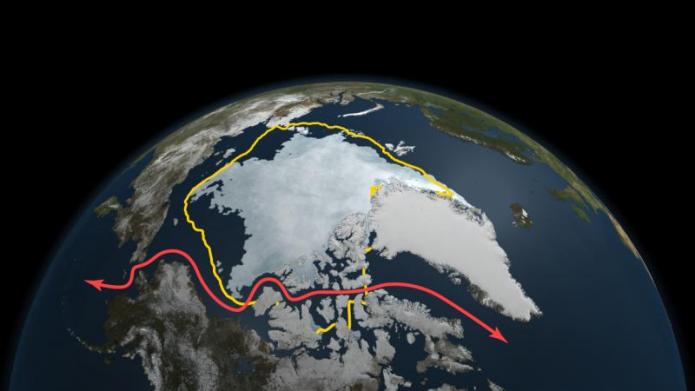 The Arctic sea ice undergoes large fluctuations over the course of a year, and, like all aspects of the climate system, there is a good deal of natural variability. So, while one or two extreme years do not necessarily make a trend, they may be part of a trend. Visit NASA's Earth Observatory to see a nice set of maps looking down on the North Pole showing the sea ice extent over the last 12 years; each map shows the long-term mean ice extent in a yellow line. One thing that becomes apparent is that there is much more variability in the end-of-summer minimum ice extent than the end-of-winter maximum; another thing that is apparent is that the reduction in Arctic sea ice is not just confined to 2011.

In the figure below, we see a summary of data on the ice extent, reported as an anomaly (departure from the mean), and it now becomes apparent that there has been a more or less steady decline since about 1970. 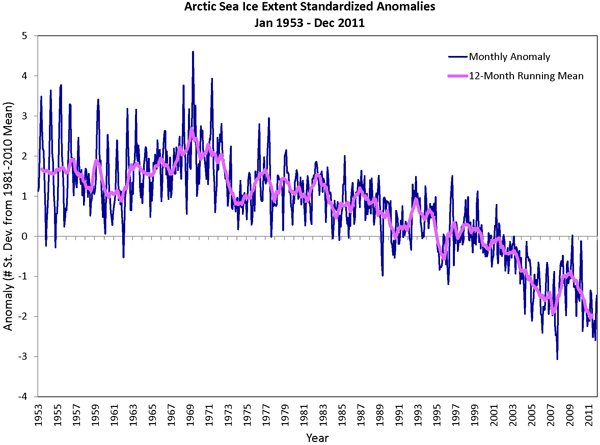 Sea ice extent departures from monthly means for the Northern Hemisphere. For January 1953 through December 1979, data have been obtained from the UK Hadley Centre and are based on operational ice charts and other sources. For January 1979 through December 2012, data are derived from passive microwave (SMMR / SSM/I).
Credit: Walt Meier and Julienne Stroeve, National Snow and Ice Data Center, University of Colorado, Boulder, State of the Cryosphere.

In addition to the reduced area of coverage, the Arctic ice is also becoming thinner. The thickness of the ice in the Arctic has been monitored for a long time by the US Navy, using submarines. Now, satellites can measure ice thickness. The comparison below shows a 40% to 50% decrease in the thickness of ice from the average over 1958-1976 compared to the present. 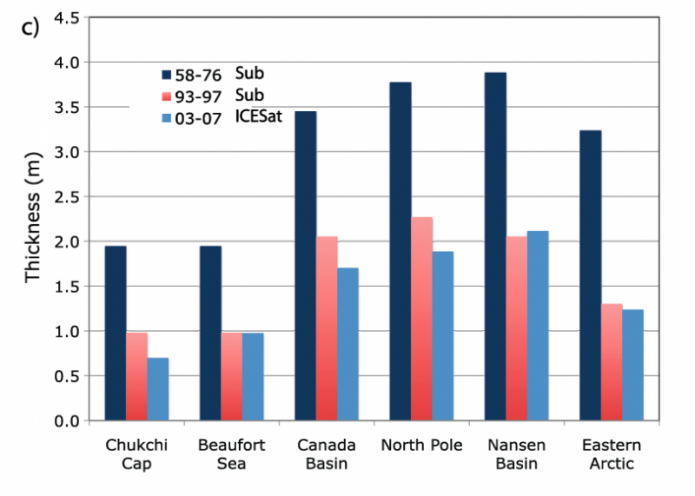 This reduction in the coverage of Arctic sea ice is significant since it means that during the summer months when the sun is at its brightest in the polar region, and there are 24 hours of daylight, the reflective ice cover is being reduced, allowing for the absorption of a much greater quantity of solar energy that can then warm the whole polar region. This change in sea ice coverage is mainly an Arctic phenomenon — in the Antarctic, the sea ice is relatively constant over this same time period (from 1958-1976).

Finally, a word on sea level. The melting of ice sheets and mountain glaciers is partially responsible for a significant rise in sea level---20 cm in the last 100 years. However, thermal expansion of sea water as a result of warming is equally, if not more, important. Also, since sea ice is already at ocean level, its melting does not contribute to sea level rise.