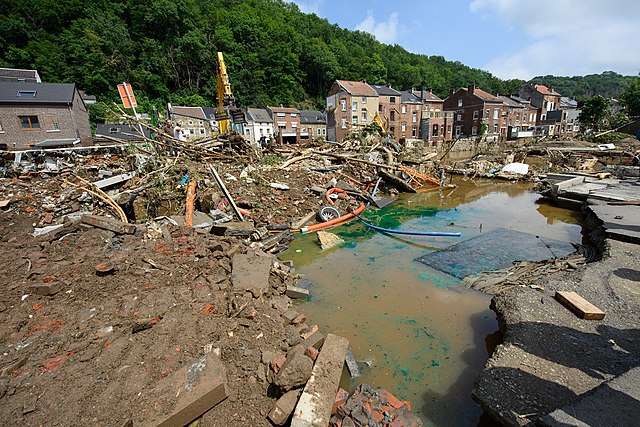 In the summer of 2021, western Europe experienced severe and deadly flooding. The rainfall was extraordinary, possibly a 1000 year event as a storm system stalled for several days dumping 11 inches in 48 hours in eastern Belgium including 9 inches in the populated city of Liege, and up to 8 inches of rain in 9 hour period in Germany. Flooding occurred over a wide area including Belgium, Germany, Luxembourg, the Netherlands, Switzerland, and Austria. In Germany 168 dead and hundreds were missing as of this writing but the death toll is not expected to rise substantially. In Belgium floodwaters caused buildings to collapse and washed away cars. The floods were called the greatest natural disaster the country has ever experienced. In Germany, the Ahr river valley was particularly bad because gorges caused extensive flooding and over 100 deaths and the country’s flood warning system was cited for a monumental failure, although it appears that local authorities take some of the blame.

One near unanimous source of blame among scientists was climate change with the flooding even exceeding current forecasts for climate change. Warmer atmosphere can hold more moisture. In addition, melting Arctic ice is causing the jet stream to weaken and this is leading the storms systems that move slower or stall. Combined these factors are leading to more extreme events including days of flooding rains.

The video shows dramatic footage of the powerful floods:

First, let's take a quick look at the precipitation pattern of the globe, which is now being measured in great detail by NASA's Aquarius satellite.

Rainfall averages in terms of mm/day for the month of August 2012.
Credit: NASA (Public Domain)

The two images above show the rainfall averages in terms of mm/day for the month of August 2012, above, and the rainfall anomaly for the same month, below.

Earlier satellites did not have the same resolution, but the record goes back to the late 1970s, allowing us to get a picture of the longer-term mean precipitation patterns, which can be seen in the video below. Watch this movie a few times through to see the annual patterns of precipitation, and focus especially on the region around India, where the summer monsoons show up beautifully.

Video: Average Long Term Monthly Rate of Precipitation (00:03) This video is not narrated.

This movie shows the mean precipitation rate for each month of the year over the time period from 1981 to 2010.
Credit: Data from NASA; video created by David Bice © Penn State University is licensed under CC BY-NC-SA 4.0

On a global scale, there is no clear sign that the amount of precipitation is increasing, as can be seen in this next figure, which plots the global average precipitation rate for each month. 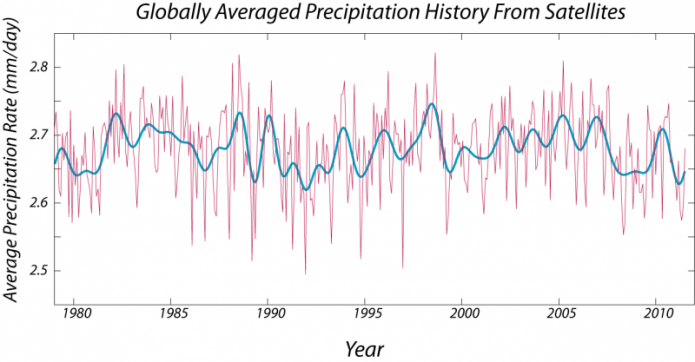 The figure above shows the history of the monthly average precipitation rates, averaged over the globe — kind of a difficult thing to swallow at first. Think of the values plotted along the y-axis as being the precipitation rate, averaged over the whole globe for a given month. As you can perhaps see, there is a strong seasonal cycle (with peaks in the fall each year) — I've removed the seasonal variation from the raw data to give the thicker blue line, showing variability that is not related to the seasonal cycle. One thing that is clear is that there is no general upward or downward trend over this period, although there are ups and downs, some of which correspond to the El Niño oscillations.

But because the trend suggests there will be extra water vapor in the atmosphere in the future, when the conditions are right for a big precipitation event, the event might be bigger than today or in the past. In addition, predictions suggest there might be more storm events that exceed a certain threshold so that they are classified as extreme precipitation events.

More regionally, the El Niño cycle produces a dramatic change in precipitation patterns in parts of the globe with Southeastern Australia becoming dry in summer and more prone to bushfires. In the US, El Niño corresponds to heavy winter rainfall in California as the so-called "Pineapple Express" picks up and transports heat and moisture from the tropical Pacific. Folks in California always hope that El Niño events put an end to drought. More on that in Module 8. El Niño is generally not a good time to visit Florida in the winter as the same pattern extends across the southern US. 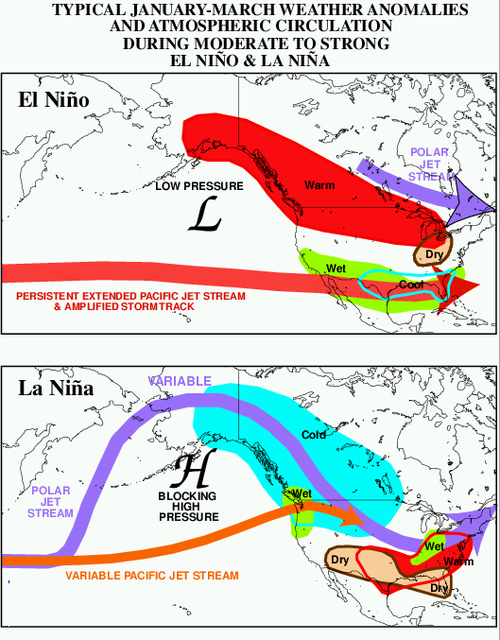