We next turn our attention to a very different means of reconstructing the temperature — studies of the temperatures measured in boreholes (i.e., holes drilled into the ground) at various locations around the Earth. The temperature profiles (how temperature changes with depth) for three representative boreholes in eastern Canada are shown in the figure below:

Temperature profiles from three representative boreholes showing the unexpected curvature towards higher temperatures near the tops of the boreholes.
Credit: David Bice © Penn State University is licensed under CC BY-NC-SA 4.0

Note that in all three cases, the temperature curves around to higher temperatures near the surface — this reflects a response of soil and bedrock to warming from the atmosphere. In the absence of warming at the surface due to climate change, these temperature profiles would tend to follow the trends represented in the lower few hundreds of meters, and this would intersect the surface at around 3-4°C.

The basic idea here is a surprising one — that the way temperature changes down a borehole at the present time tells us something about how the surface temperature has changed in the past. This is indeed a remarkable and useful reality of some fairly basic physics of heat flow. It also provides us with an excellent way to filter out the “noise” in the climate record and focus on the main trends.

Heat is just a measure of the kinetic or vibrational energy of the atoms in some substance. If something is hot, its atoms are vibrating very fast, and because vibrating atoms affect neighboring atoms, heat can be transmitted; we often talk about this heat transmission as heat flow. Heat flows from hot regions to cold regions and the rate of heat flow is proportional to what we call the thermal gradient — the rate of temperature change with distance. In our case, for distance, we are talking about depth in the Earth, and the center of the Earth is very hot — about 5000°C. The surface, instead, is quite cool at 15°C, so heat from the Earth tends to flow out to the surface, and this process is cooling the Earth very slowly. This situation leads to a geothermal gradient (rate of change of temperature with depth) that tends to be more or less steady at around 20 or 30°C per kilometer. The heat released to the surface is tiny compared to the energy coming from the Sun, so this geothermal heat, on a global basis, does not affect the climate. 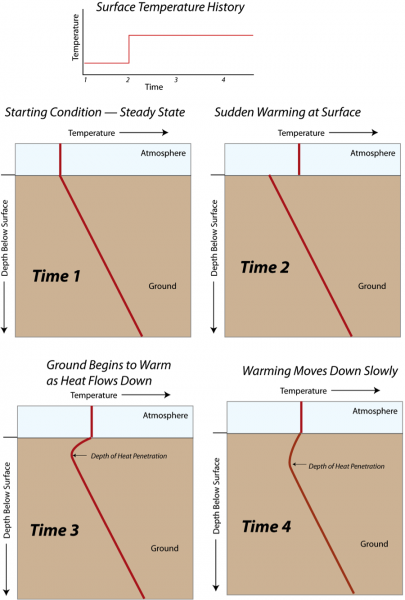 Schematic illustration of how the temperature below the surface responds to an abrupt increase in the surface temperature.
Credit: David Bice © Penn State University is licensed under CC BY-NC-SA 4.0

Rocks have a very low thermal conductivity (conductivity is the term used to describe the way heat is transported at the molecular level) compared to many other materials, which means that it can take a long time for rocks underground to respond to changes in surface temperatures. Because of the way that the heat flows through rocks, short-term changes are smoothed out as the heat diffuses through the rocks. This means that the borehole temperature profiles provide information only about changes in the long-term average temperature. 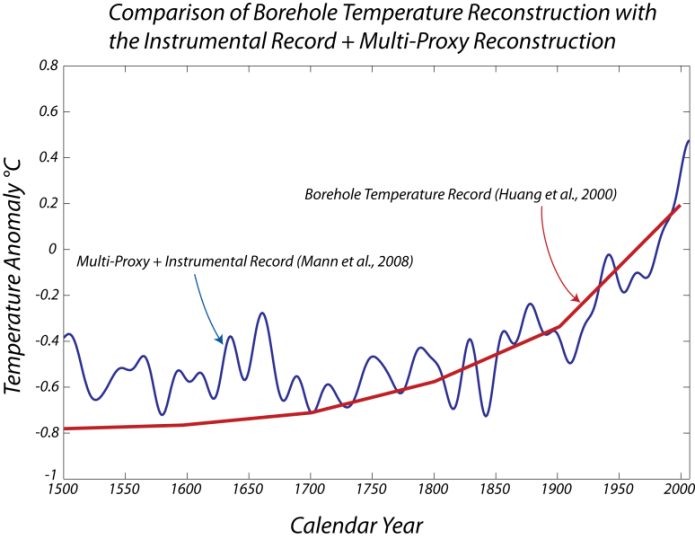 Clearly, the shapes of the curves, or the rates of temperature change over this time period, are in close agreement, which is important since they come from very different, independent data sources. The borehole temperature reconstruction does not match the last bit of this time period in part because the measurements begin further down the hole, and many of the measurements were made in the 1980s and 1990s before the instrumental record ends.