What is a STELLA model?

What is a STELLA model?

It is a computer program containing numbers, equations, and rules that together form a description of how we think a system works — it is a kind of simplified mathematical representation of a part of the real world. Systems, in the world of STELLA, are composed of a few basic parts that can be seen in the diagram below: 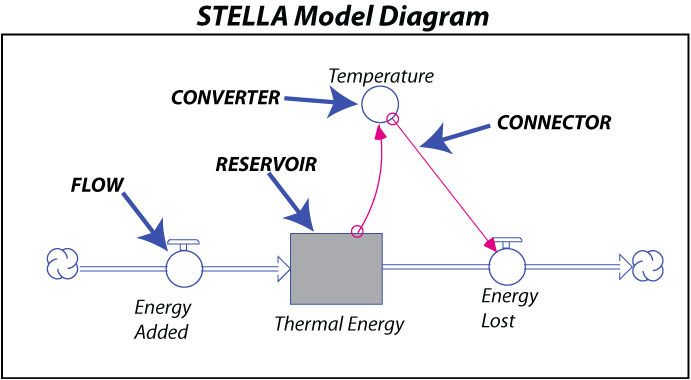 A Reservoir is a model component that stores some quantity — thermal energy in this case.

A Flow adds to or subtracts from a Reservoir — it can be thought of as a pipe with a valve attached to it that controls how much material is added or removed in a given period of time. The cloud symbols at the ends of the flows signify that the material or quantity has a limitless source, or sink.

A Connector is an arrow that establishes a link between different model components — it shows how different parts of the model influence each other. The labeled connector, for instance, tells us that the Energy Lost Flow is dependent on the Temperature of the planet.

A Converter is something that does a conversion or adds information to some other part of the model. In this case, Temperature takes the thermal energy stored in the Reservoir and converts it into temperature.

To construct a STELLA model, you first draw the model components and then link them together. Equations and starting conditions are then added (these are hidden from view in the model) and then the timing is set — telling the computer how long to run the model and how frequently to do the calculations needed to figure out the flow and accumulation of quantities the model is keeping track of. When the system is fully constructed, you can essentially press the ‘on’ button, sit back, and watch what happens.