To Reach: The station is located about 9 miles southeast of the Dew Drop Inn and about 2 miles south of the Bend Guard Station. To reach from the Dew Drop Inn, go southeast from the junction of US Highway 2 and the Tee River Rd. (State Hwy. 20), 14 miles on the Tee River Road to a "4-Junction" with a Dim Road. Turn "left" (northwest) onto Dim Road and travel 6.1 miles to an abandoned windmill. The station is 80 feet north of the windmill, and 34 feet east of Dim Road.

Monument Description: Station mark is a standard metal disk set in a concrete post protruding three inches above the ground. The disk is stamped "S 198 1948"

The principles of good field notes have a long tradition in land surveying, and they will continue to have validity for some time to come. In GPS/GNSS, the ensuing paper trail will not only fill subsequent archives; it has immediate utility. For example, the station data sheet is often an important bridge between on-site reconnaissance and the actual occupation of a monument. Though every organization develops its own unique system of handling its field records, most have some form of the station data sheet. The document illustrated here is merely one possible arrangement of the information needed to recover the station. The station data sheet can be prepared at any period of the project, but perhaps the most usual times are during the reconnaissance of existing control or immediately after the monumentation of a new project point. Neatness and clarity, always paramount virtues of good field notes, are of particular interest when the station data sheet is to be later included in the final report to the client. The overriding principle in drafting a station data sheet is to guide succeeding visitors to the station without ambiguity. A GPS/GNSS surveyor on the way to observe the position for the first time may be the initial user of a station data sheet. A poorly written document could void an entire session if the observer is unable to locate the monument. A client, later struggling to find a particular monument with an inadequate data sheet, may ultimately question the value of more than the field notes.

Here is an example of a station data sheet. This is the sort of information that will be recorded again in a static control survey to show the station that has been occupied, show a sketch of where it is located relative to other fixed landmarks, and then other information—how to reach it, a description of the monument, and of course, a signature and a date.

The station name fills the first blank on the illustrated data sheet. Two names for a single monument is far from unusual. In this case the vertical control station, officially named S 198, is also serving as a project point, number 14. But two names purporting to represent the same position can present a difficulty. For example, when a horizontal control station is remonumented, a number 2 is sometimes added to the original name of the station and it can be confusing. For example, it can be easy to mistake station, "Thornton 2," with an original station named, "Thornton," that no longer exists. Both stations may still have a place in the published record, but with slightly different coordinates. Another unfortunate misunderstanding can occur when inexperienced field personnel mistake a reference mark, R.M., for the actual station itself. The taking of rubbings and/or close-up photographs are widely recommended to avoid such blunders regarding stations names or authority. 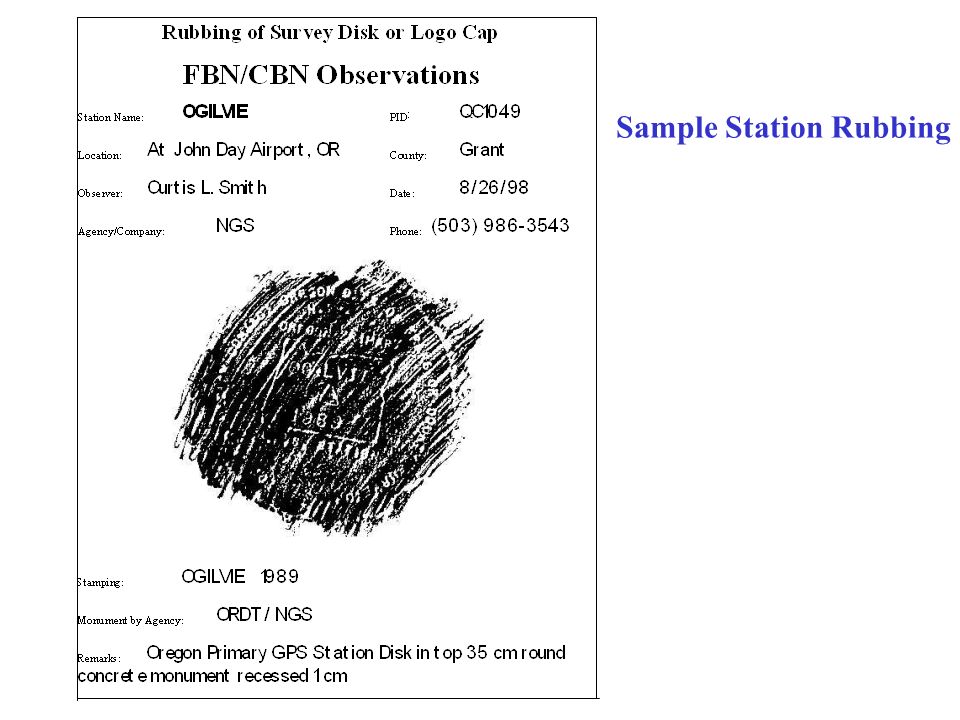 The illustrated station data sheet provides an area to accommodate a rubbing. With the paper held on top of the monument’s disk, a pencil is run over it in a zig-zag pattern producing a positive image of the stamping. This method is a bit more awkward than simply copying the information from the disk onto the data sheet, but it does have the advantage of ensuring the station was actually visited and that the stamping was faithfully recorded. Such rubbings or close-up photographs are often required

The use of photographs is growing as a help for the perpetuation of monuments. It can be convenient to photograph the area around the mark as well as the monument itself. These exposures can be correlated with a sketch of the area. Such a sketch can show the spot where the photographer stood and the directions toward which the pictures were taken. The photographs can then provide valuable information in locating monuments, even if they are later obscured. Still, the traditional ties to prominent features in the area around the mark are the primary agent of their recovery. It's important to have an idea of exactly what the monument looked like and to ensure that the intended point was occupied.

Providing the name of the appropriate state, county, and USGS quad sheet helps to correlate the station data sheet with the project map. The year the mark was monumented, the monument description, the station name, and the "to-reach" description all help to associate the information with the correct official control data sheet and, most importantly, the correct station coordinates.

When driving or walking to a position can be aided by computerized turn-by-turn navigation it is a great tool that may make writing to-reach descriptions unnecessary. However, GPS/GNSS control work is often done in areas where the roadway mapping in such navigation aids is inadequate. In those situations, the description of the route to the station is one of the most critical documents written during the reconnaissance. Even though it is difficult to prepare the information in unfamiliar territory and although every situation is somewhat different, there are some guidelines to be followed. It is best to begin with the general location of the station with respect to easily found local features. The description in the top illustration relies on a road junction, a guard station, and a local business. After defining the general location of the monument, the description should recount directions for reaching the station. Starting from a prominent location, the directions should adequately describe the roads and junctions. Where the route is difficult or confusing, the reconnaissance team should not only describe the junctions and turns needed to reach a station; it is wise to also mark them with lath and flagging, when possible. It is also a good idea to note gates. Even if they are open during reconnaissance, they may be locked later. When turns are called for, it is best to describe not only the direction of the turn, but the direction of the new course too. For example, in the description in the station data sheet at the top the turn onto the dim road from the Tee River Road is described to the,"left (northwest)." Roads and highways should carry both local names and designations found on standard highway maps. For example, in the illustrated form, Tee River Road is also described as State Highway 20. The "to-reach" description should certainly state the mileages, as well as the travel times where they are appropriate, particularly where packing-in is required. Land ownership, especially if the owner's consent is required for access, should be mentioned. The reconnaissance party should obtain the permission to enter private property and should inform the GPS/GNSS observer of any conditions of that entry. Alternate routes should be described where they may become necessary. It is also best to make special mention of any route that is likely to be difficult in inclement weather. Where helicopter access is anticipated, information about the duration of flights from point to point, the distance of landing sites from the station, and flight time to fuel supplies should be included on the station data sheet.

Flagging and Describing the Monument

Flagging the station during reconnaissance may help the observer find the mark more quickly. On the station data sheet, the detailed description of the location of the station with respect to roads, fence lines, buildings, trees, and any other conspicuous features should include measured distances and directions. A clear description of the monument itself is important. It is wise to also show and describe any nearby marks, such as reference monuments (R.M.'s) that may be mistaken for the station or aid in its recovery. The name of the preparer, a signature, and the date round out the initial documentation of a GPS/GNSS station.