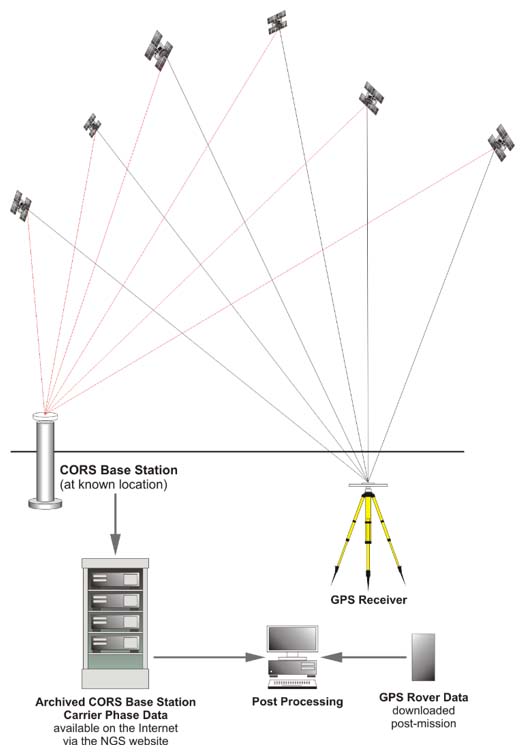 So, here are the fundamental ideas that underlie some GPS surveying techniques. Most often, a fixed point with previously established coordinates is occupied by a one receiver, a base station. The first receiver, the base, provides the data to compute the differences between its known position and the unknown positions measured at the second, or roving receiver. Static GPS requires post-processing and is used for establishing control by GPS. With DGPS, the corrections can either be applied in post-processing or in real-time. And while correlated systematic errors can be virtually eliminated with differential correction, the biases such as multipath and receiver channel noise are certainly not. These errors have been much reduced in modern GPS receivers, but not completely defeated. Biases such as high PDOP can only be resolved with both good receiver design and care as to when and where the surveying is done. Real-Time Kinematic is the method of choice for much of GPS work, but the technique is being supported more and more by Real-Time Networks as opposed to dedicated individual base stations. And Precise Point Positioning, PPP, offers a centimeter or decimeter solution that does not rely on differential correction as it is usually defined, but rather precise ephemeris and clock data. Finally, all of these techniques will be improved as the Global Navigation Satellite System, GNSS, matures.

There is no question that RTK dominates the GPS surveying applications. It is applicable to much of engineering, surveying, air-navigation, mineral exploration, machine control, hydrography and a myriad of other areas that require centimeter-level accuracy in real-time. However, the control on which it depends is typically set using static GPS.

The pace of the development of Real-Time Networks, RTN, both by governments and commercial interests, is accelerating. The services are sometimes free and sometimes require the arrangement of a subscription or the payment of a fee before the user can access the broadcast corrections over a datalink via a modem such as a cell-phone or some other device. But the central idea at the foundation of RTN is differential correction. That is the combination of observations from several CORS at known positions used to derive a model of an entire region still relies on the same differential ideas that we discussed near the beginning of the course.

In other words, even the latest developments in satellite positioning continue to be based on the same fundamental principles.

In the next lesson, we continue to delve into the details of how GPS work is done from start to finish, including processing.

Before you go on to Lesson 8, double-check the Lesson 7 Checklist to make sure you have completed all of the activities listed there.

‹ Discussion up Lesson 8: Observing and Processing ›