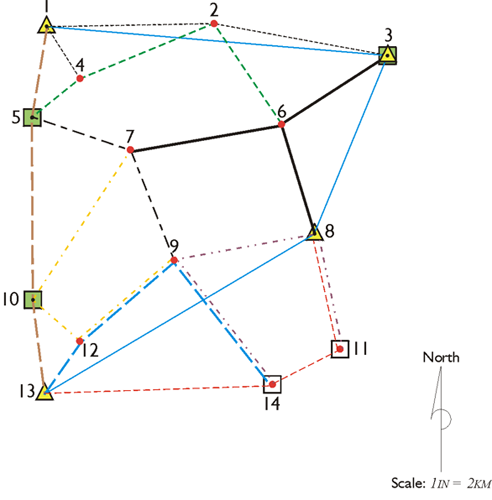 When everything goes as planned, a GPS/GNSS observation is uneventful. However, even before the arrival of the receiver operator at the control or project point, the session can get off-track. The simultaneity of the data collected at each end of a baseline is critical to the success of any measurement in static GPS/GNSS control surveys. When a receiver occupies a master station throughout a project, there need be little concern on this subject. But most static applications depend on the sessions of many mobile receivers beginning and ending together.

The number of possible delays that may befall an observer on the way to a station are too numerous to mention. With proper planning and reconnaissance, the observer will likely find that there is enough time for the trip from station to station and that sufficient information is on hand to guide the observer to the position, but this, too, cannot be guaranteed. When the observer is late to the station, the best course is usually to set up the receiver quickly and collect as much data as possible. The baselines into the late station may or may not be saved, but they will certainly be lost if the receiver operator collects no information at all. It is at times like these that good communication between the members of the GPS/GNSS team is most useful. For example, some of the other observers in the session may be able to stay on their station a bit longer with the late arrival and make up some of the lost data. Along the same line, it is usually a good policy for those operators who are to remain on a station for two consecutive sessions to collect data as long as possible, while still leaving themselves enough time to reset between the two observation periods.

Centering an instrument over the station mark is always important. However, the centimeter-level accuracy of static GPS/GNSS gives the centering of the antenna special significance. It is ironic that such a sophisticated system of surveying can be defeated from such a commonplace procedure. A tribrach with an optical plummet or any other device used for centering should be checked and, if necessary, adjusted before the project begins. With good centering and leveling procedures, an antenna should be within a few millimeters of the station mark.  Unfortunately, the centering of the antenna over the station does not ensure that its phase center is properly oriented. The contours of equal phase around the antenna’s electronic center are not themselves perfectly spherical. Part of their eccentricity can be attributed to unavoidable inaccuracies in the manufacturing process. To compensate for some of this offset, it is a good practice to rotate all antennas in a session to the same direction. Many manufacturers provide reference marks on their antennas so that each one may be oriented to the same azimuth. That way, they are expected to maintain the same relative position between their physical and electronic centers when observations are made.

‹ Monumentation up Height of Instrument ›